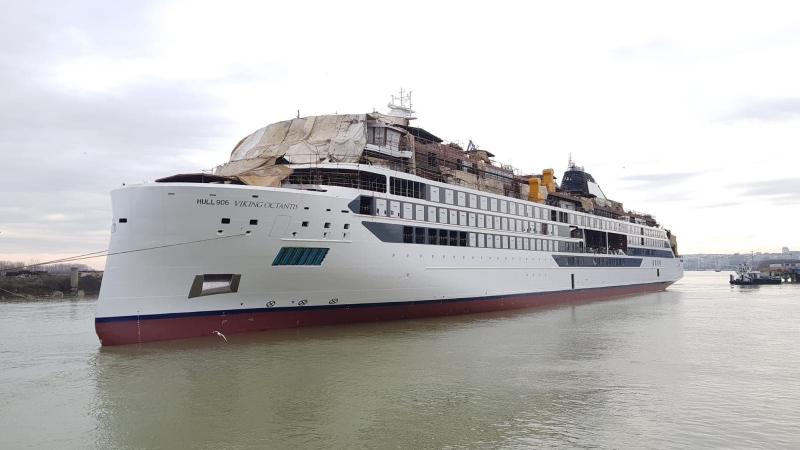 “Working with Fincantieri over the last eight years, we have built the world’s most beautiful ocean ships. We are pleased to continue our partnership with Fincantieri’s VARD and celebrate this important milestone in the construction of our first expedition vessel,” said Torstein Hagen, Chairman of Viking.

“In creating ‘the thinking person’s expedition,’ we are perfecting polar expedition cruising, and we will usher in a new era of comfortable exploration in the heart of North America. Viking Octantis and her sister ship, Viking Polaris, will allow our guests to explore further – to the ends of the earth as well as closer to home. I would like to thank our partners at VARD and everyone working at the yard for the hard work and dedication on the building of Viking Octantis; we look forward to welcoming her to our fleet in early 2022.”

A ship’s floating out is significant because it means the vessel is moving into its final stage of construction. After Octantis was floated out, she was moved to a nearby fitting dock where she will undergo further construction and interior build-out. Explorers Liv Arnesen and Ann Bancroft will be honored as ceremonial godmothers to Viking Octantis and Polaris, respectively. Arnesen, a native Norwegian, became the first woman in the world to ski solo and unsupported to the South Pole in 1994.

Bancroft is the first woman to successfully ski to both poles. Arnesen and Bancroft also became the first women to ski across Antarctica in 2001.

Together they co-founded Bancroft Arnesen Explore/Access Water, an initiative that aims to engage and empower over 60 million minds to work towards creating a sustainable future.

Viking’s expedition ships will feature public spaces that are familiar to the line’s ocean cruise guests, but that have been reimagined for expeditions — as well as new spaces created specifically for expeditions.

In addition to beautiful and comfortable living spaces, the ships will feature The Laboratory where Viking Resident Scientists will be working on a variety of studies.

Guests will have supervised access to The Laboratory, to learn from and participate with scientists undertaking research in the region where the ship sails. The vessels will also have expedition equipment such as military pro zodiac boats, two-seater kayaks, and two 6-passenger submarines.