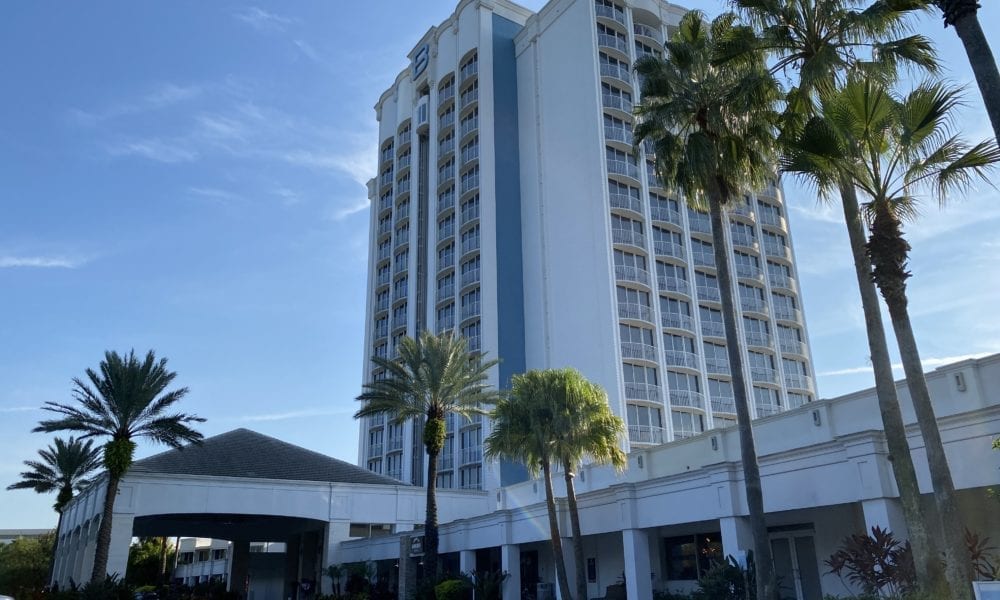 Thanks to the current health crisis, cruise ships aren’t sailing, leaving many people looking for alternatives they can enjoy while still remaining safe. With that in mind, we’re offering a series of articles about various restaurants, hotels, parks and venues found around Florida, one of the cruise capitol’s of the world.

When you write about travel for a living, you learn a lot about not only the world around you, but how to navigate it safely.

That’s proven to be especially helpful during the pandemic, during which I’ve stayed in numerous hotels while I wait for cruise ships to sail again. (And when they do, you can be sure I’ll be one of the first to board.)

Earlier this year, I drove from Florida to Yellowstone National park, a trip which involved staying in numerous hotels along the way. Yes, some hotels felt safer and more health-conscious than others, but overall, most properties seemed to be doing their part to protect both the guest and employee. 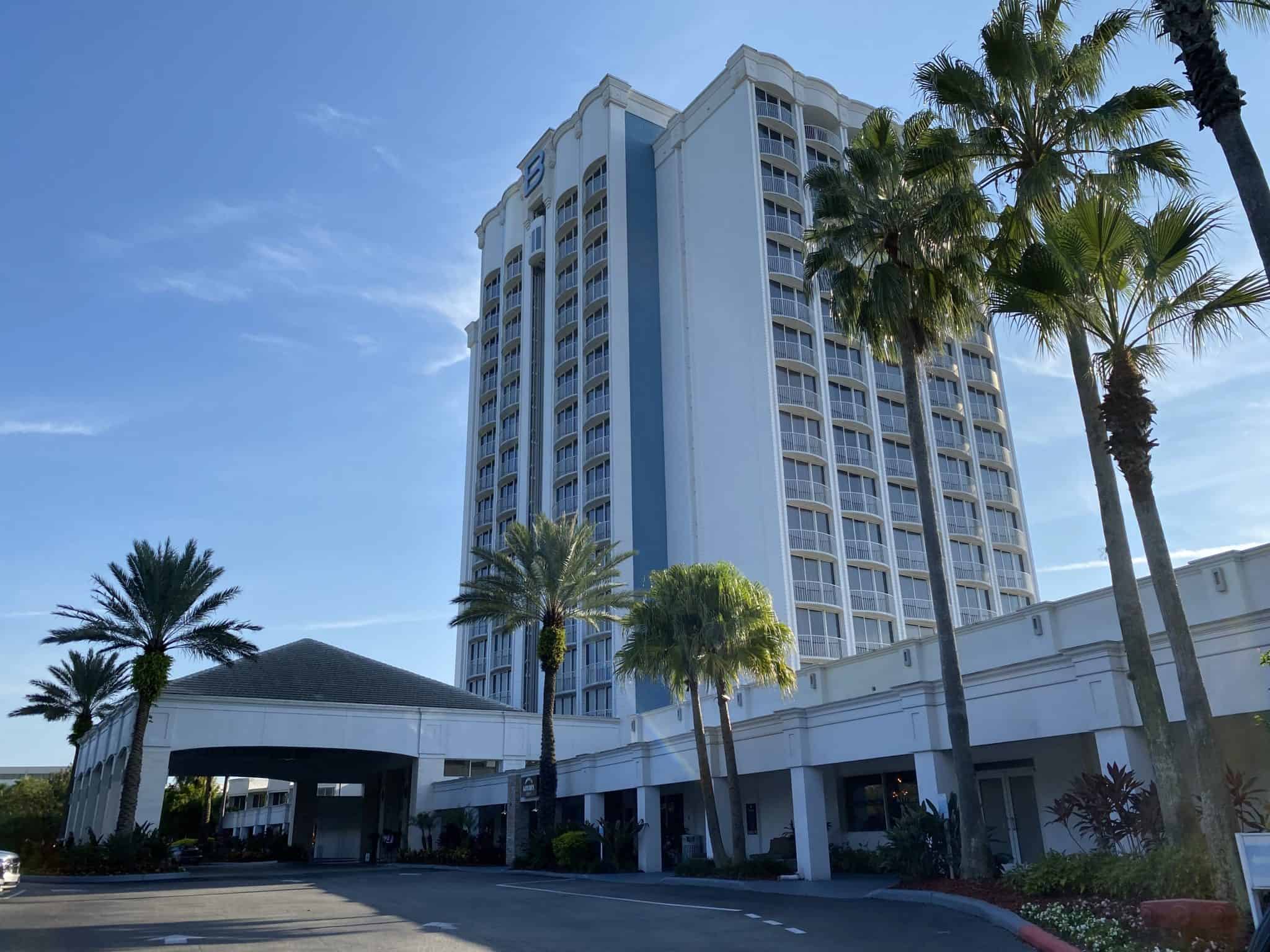 One thing the current health crisis has done is drive demand for hotel rooms into the ground, meaning lower rates and better deals than I’ve seen in years. A quick look at popular booking apps shows hotel rooms near Walt Disney World in Orlando going for as low as $27 per night.

On a recent trip to Walt Disney World, I decided to stay near Disney Springs. Typically, I wouldn’t stay in one of the “official” Disney Springs hotels because the rates tend to be higher than off-property hotels.

Truth be told, it’s usually much cheaper to grab a hotel room on International Drive and commute to the Disney parks.

However, when you see a resort for $57, it’s hard to turn down. Especially when the offer I was looking at included free self-parking ($22 value). The only thing I was on the hook for after booking the room was the $15 resort fee.

Arriving at the B Hotel 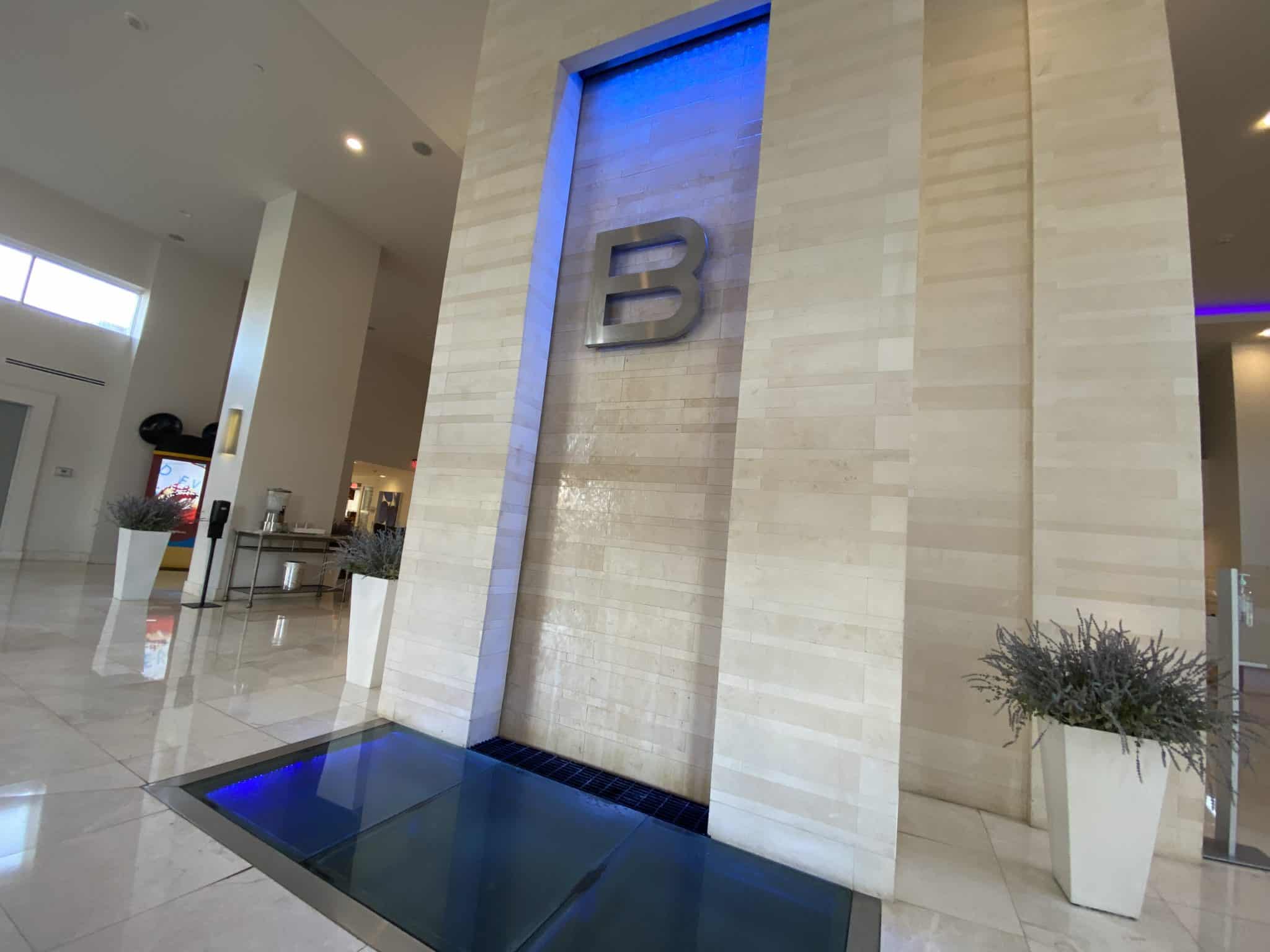 The B Hotel Lake Buena Vista was very easy to find and you could not miss it. It can be seen from both Interstate 4 and Hotel Plaza Boulevard.

Upon pulling up underneath the covered awning to check in, we discovered there was a valet option (a bit surprising, since a lot of businesses have temporarily halted valet service), but we did not opt for that because the self-parking lot was only 100 feet from the entrance of the hotel. 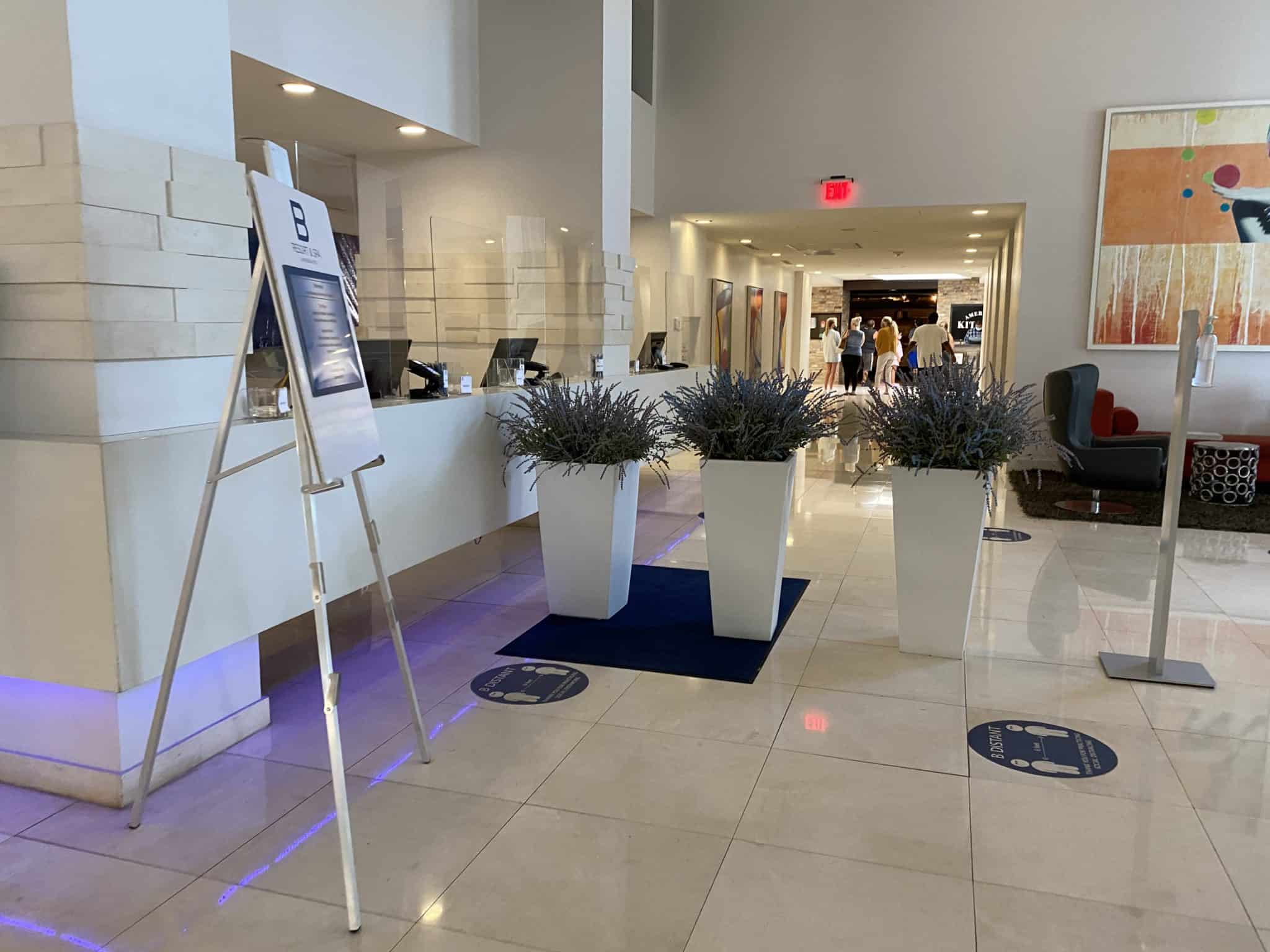 There were signs on the front door asking all who entered to wear a mask and use the hand sanitizer dispenser just inside the door. This hotel touts the ‘B Committed to Cleanliness’ program that lets guests know what exactly is being done to ensure the property and rooms are being cleaned to the highest standards.

When approaching the check-in desk, there are markers on the ground showing you where to stand to socially distance yourself from the party in front of you. 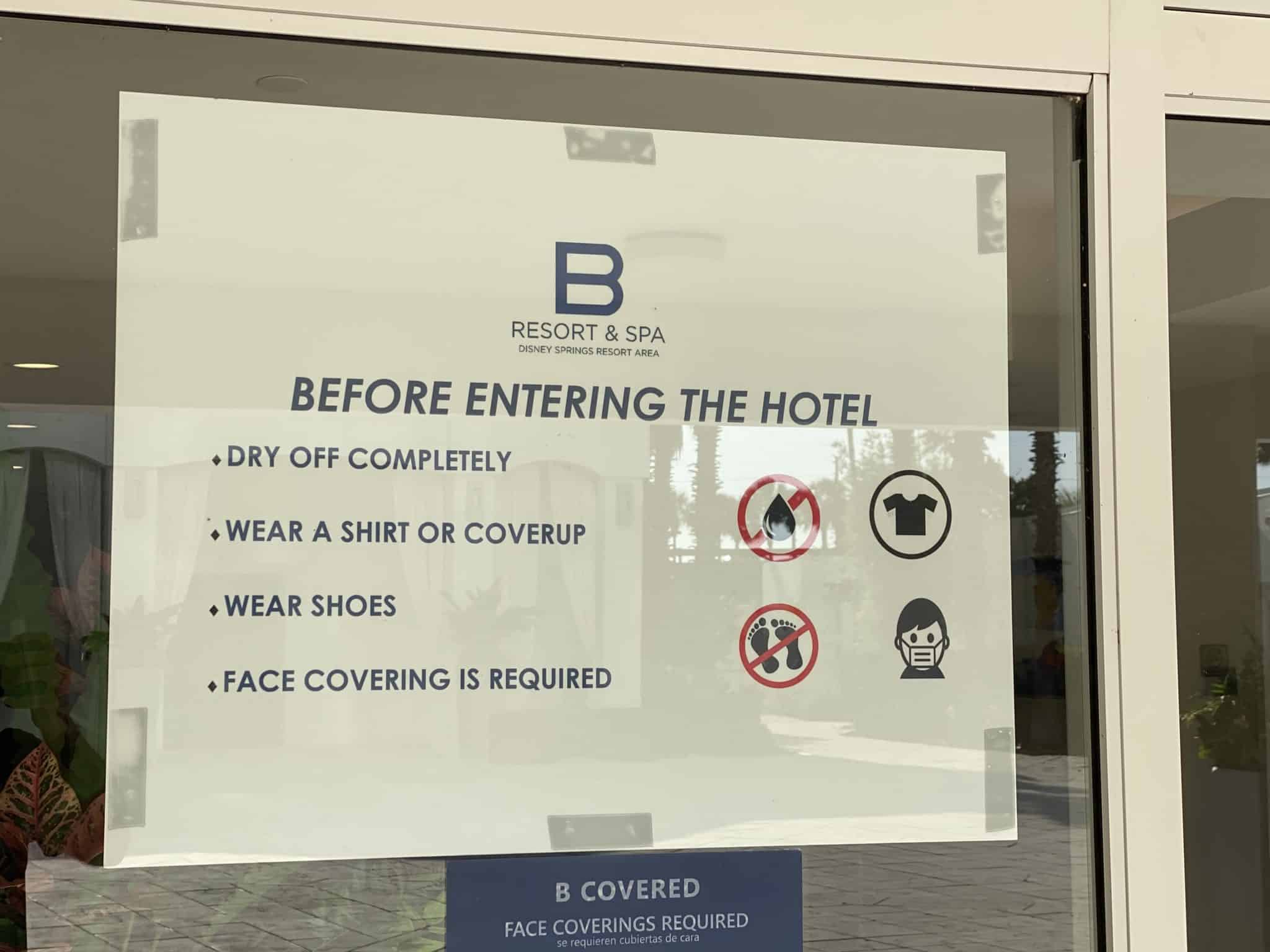 The check-in desk has plexiglass barriers up and the credit card machine is on the guest side of the partition. We found there was nothing out of the ordinary for checking in with the exception of having to sign a release saying that you do not have a fever, sore throat, difficulty breathing or fatigue.

When signing the release there are two separate pen containers, one cup that is marked “clean” and one marked “used.” There was also a bin at the front desk in which departing guests can drop their room key to avoid handing over a potentially contaminated keycard to the associate working the desk.

The property seemed clean overall and we did not notice anything that stood out as being unsafe or not following health and safety protocols that have been implemented by the U.S. Centers for Disease Control. 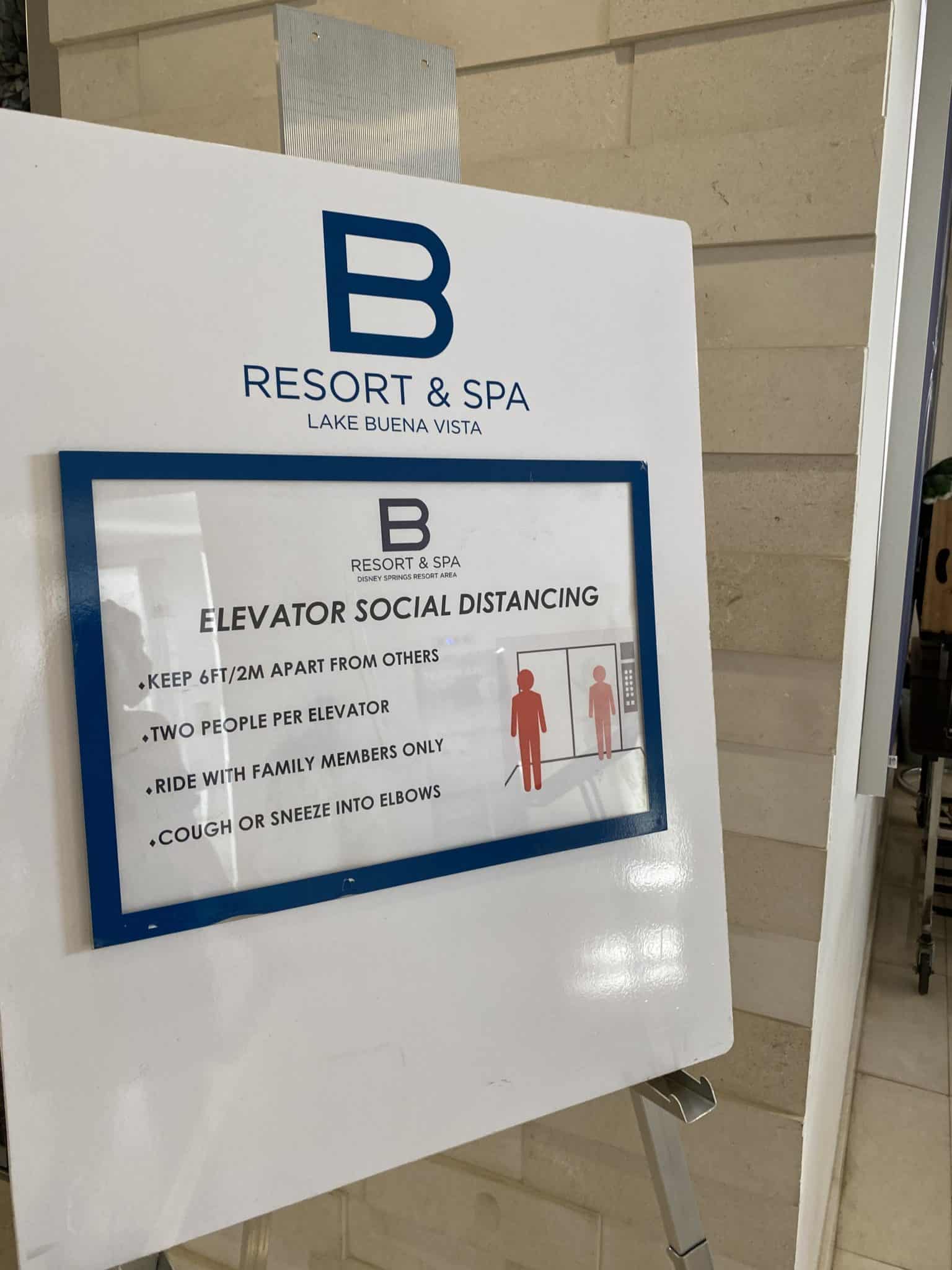 To keep you distanced from other hotel guests, there is a sign requesting that you ride the elevator only with people who are in your party or with one other person. The very last point on the elevator signage reminds guests to cough or sneeze into their elbow. 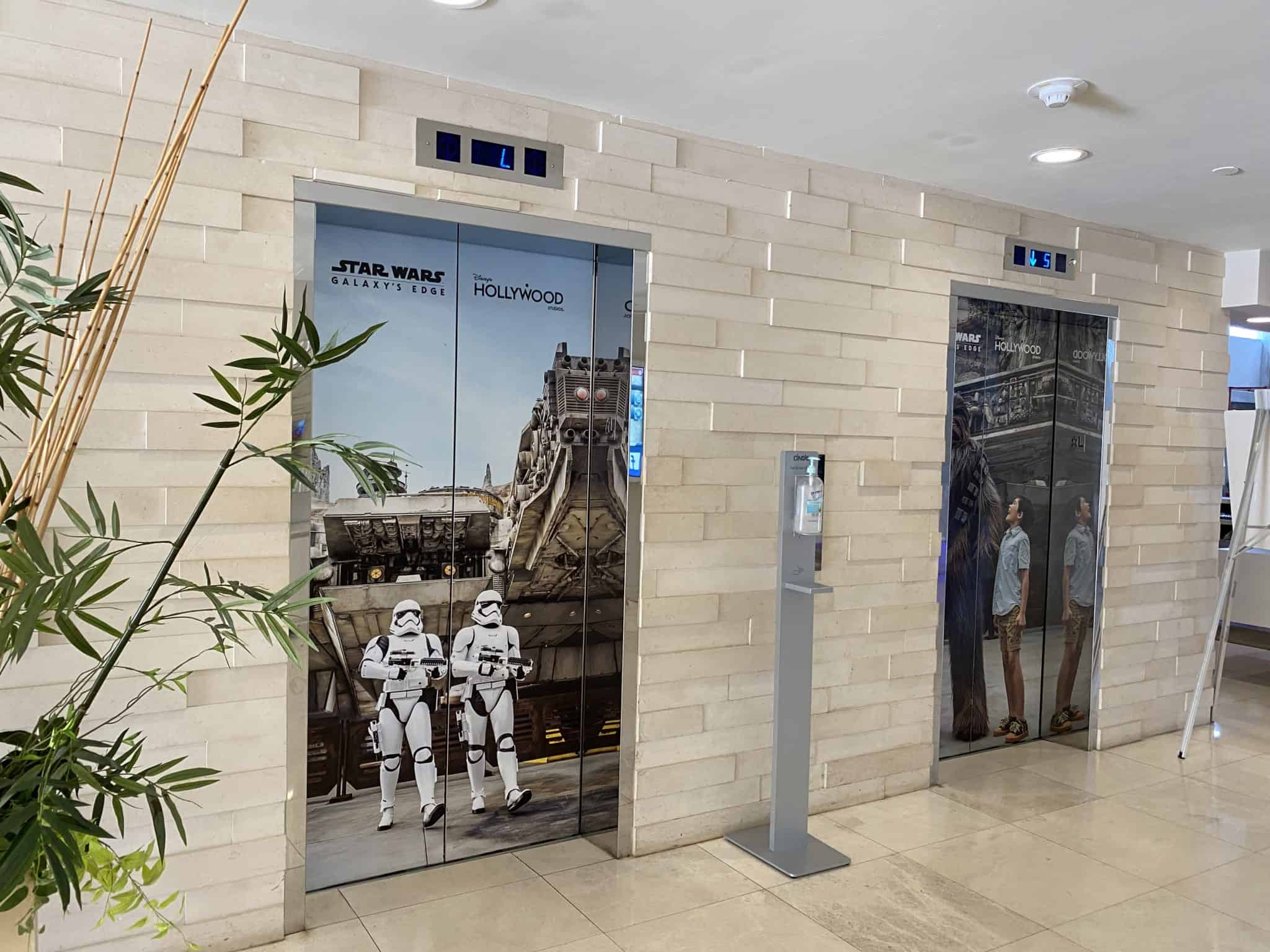 It was reassuring to see housekeepers cleaning the public areas of the hotel. We noticed them cleaning not only upon arrival, but also the next morning when walking downstairs to grab a coffee.

As of mid-October 2020, the pool was open for guests to enjoy, however, the spa was closed and the onsite restaurant was only open for breakfast on weekends. Signage indicated the venue was closed Monday through Thursday, and was not currently serving dinner at all. 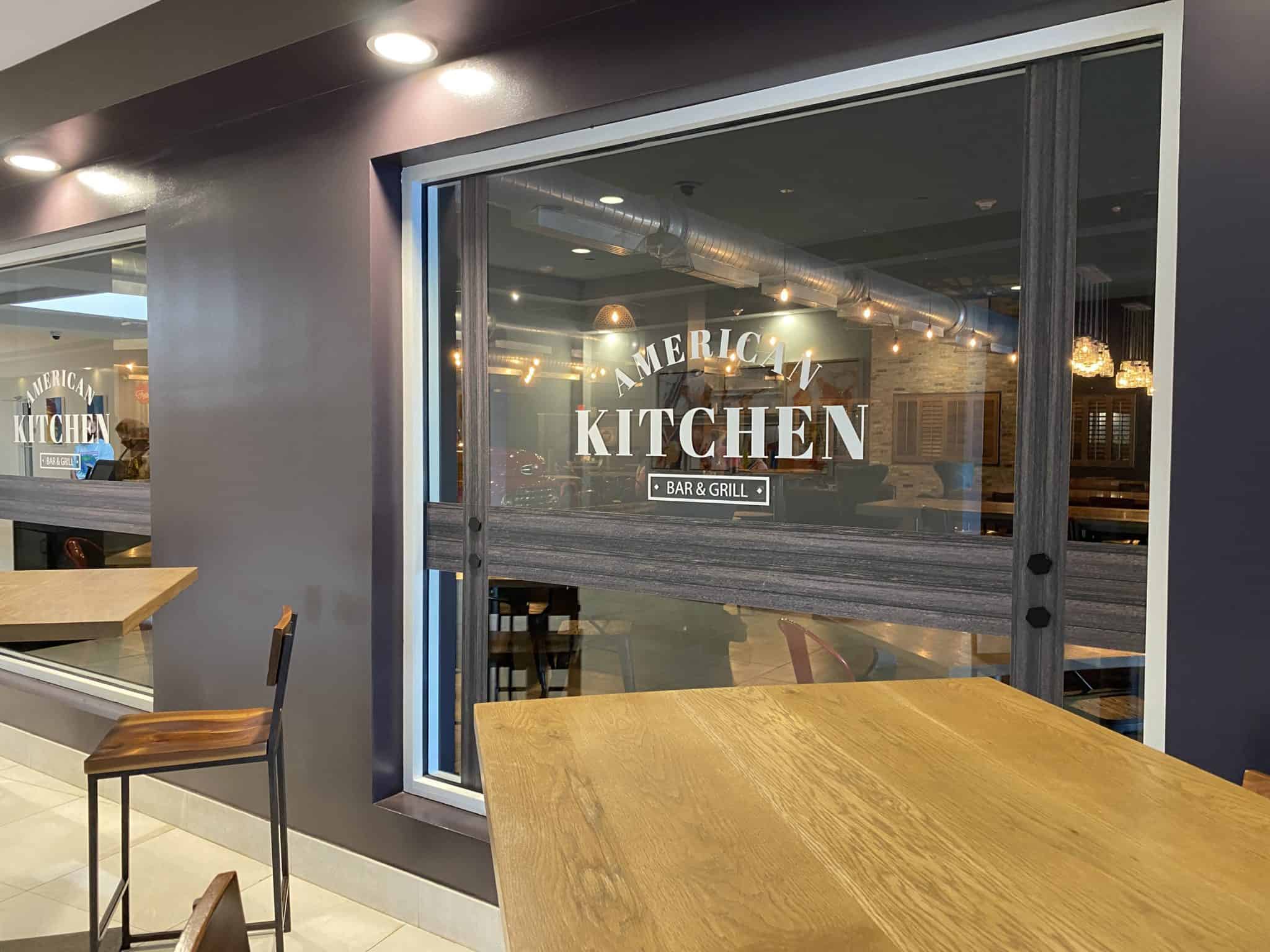 Since the many restaurants of Disney Springs are just a short distance away, this isn’t really a problem. 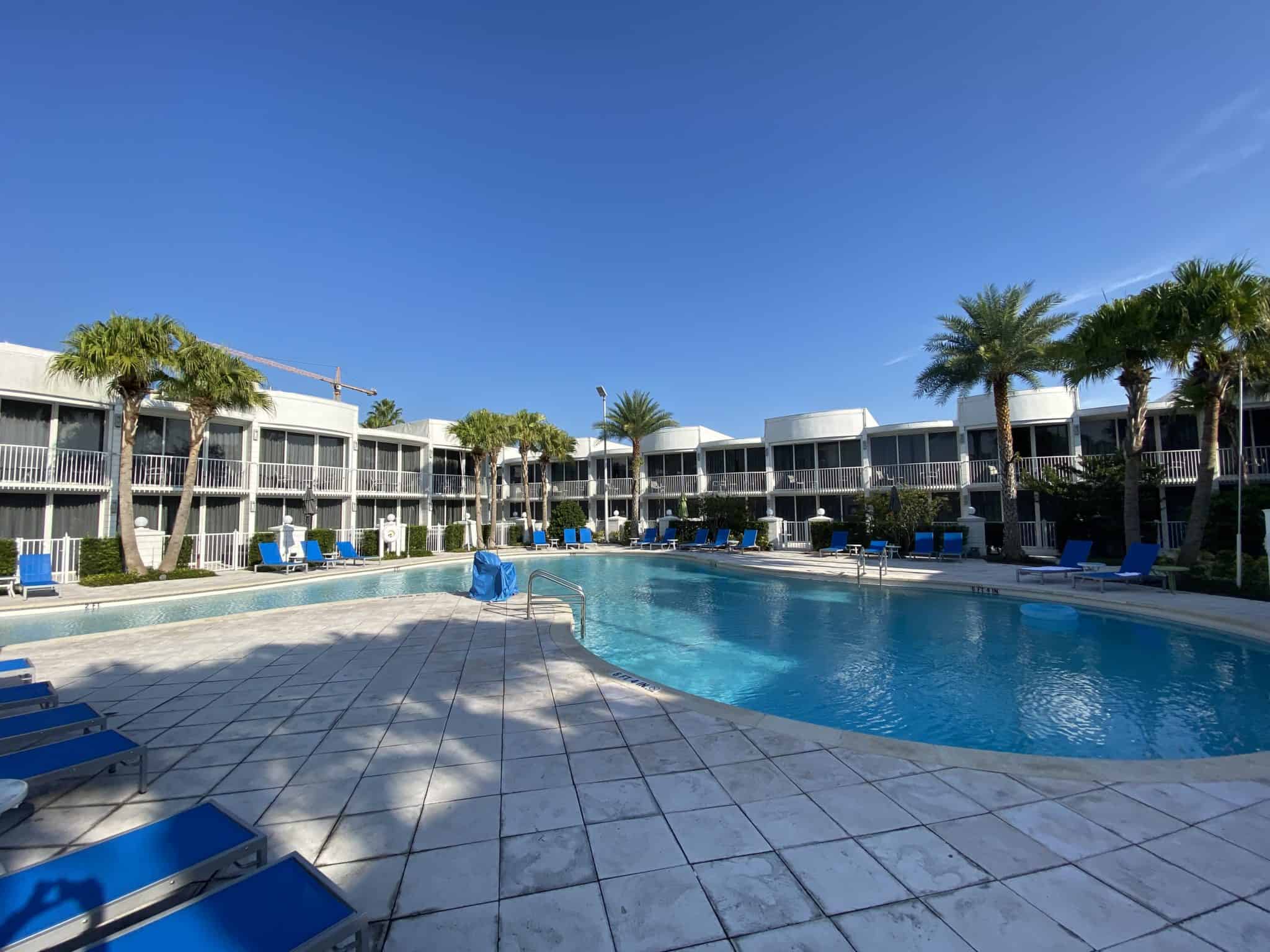 I booked a standard room with two double beds. Both the bedroom and bathroom area of the hotel room seemed very clean. 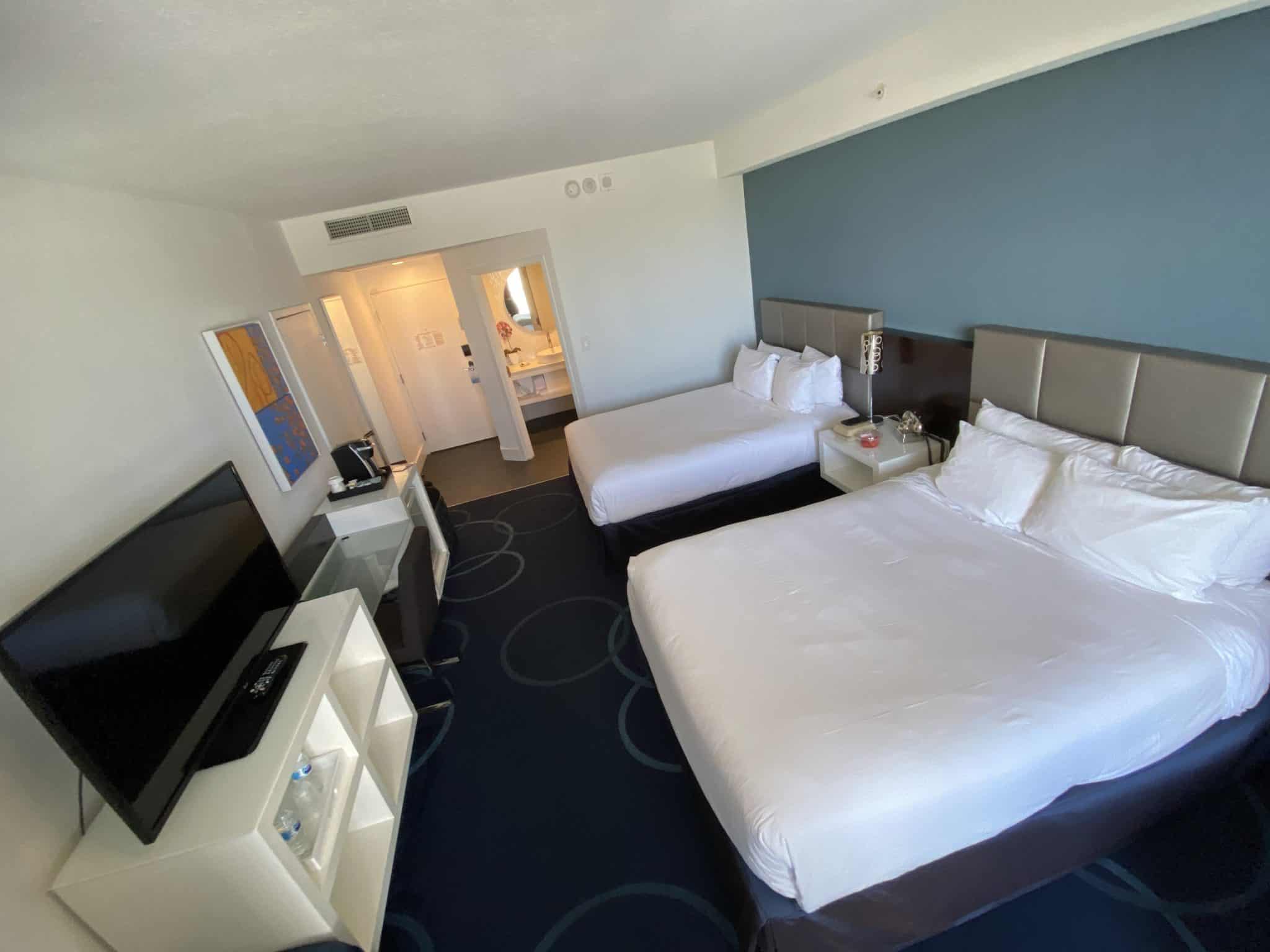 This has nothing to do with sanitizing and cleanliness, but you can tell the hotel is a bit dated. The AC unit didn’t drop below 70 even though it indicated 65 on the display (cold climate sleeper here) and the room had a bit of a stale odor.

It wasn’t overpowering but you could tell the rooms were not getting as much use as they had in the past.  This seems to be a common theme after reading guest reviews on Trip Advisor. 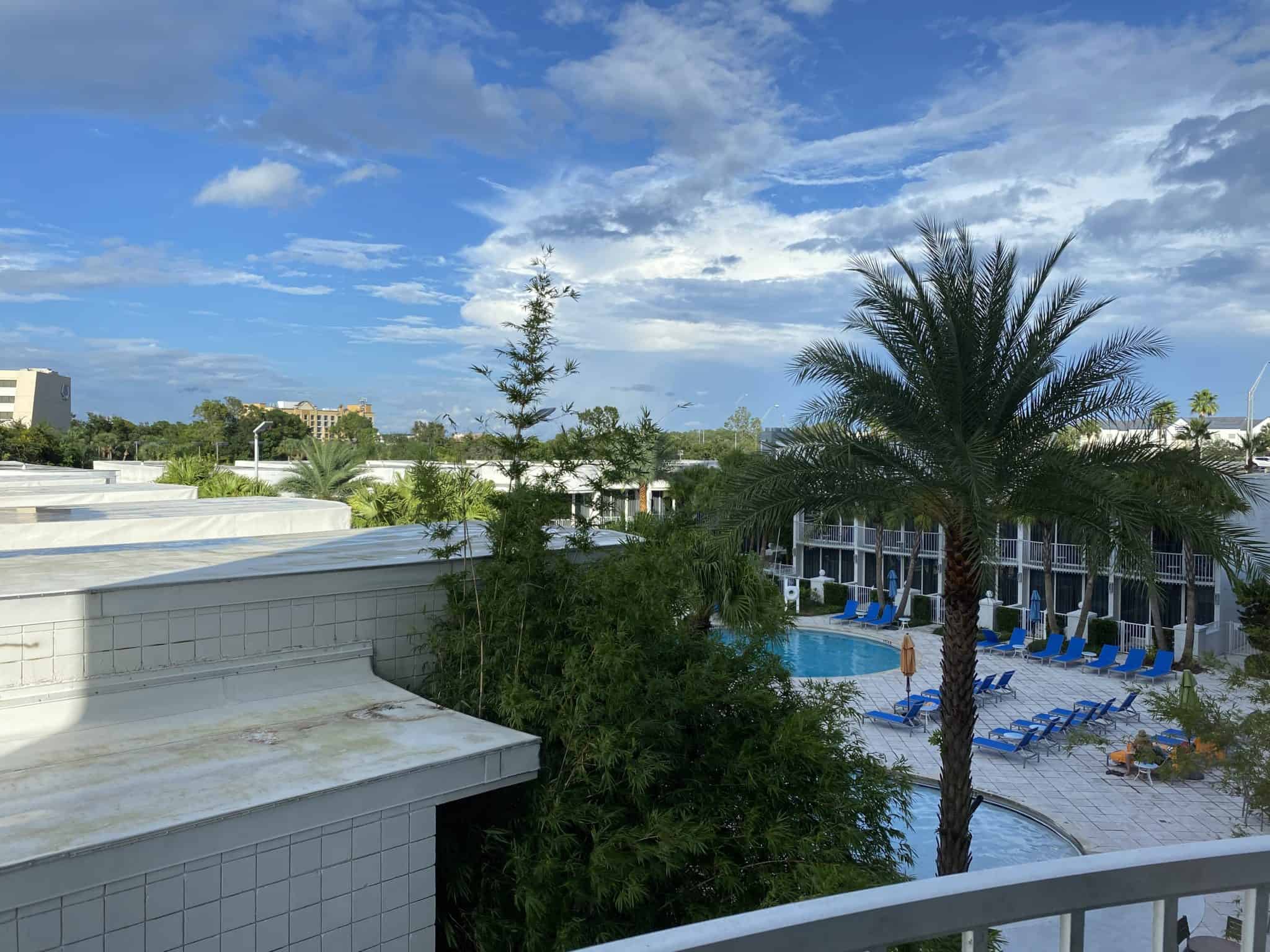 Something that I’ve gotten in the habit of doing more frequently is traveling with antibacterial wipes to ensure all the surfaces are clean in the hotel. Any area that I or my cell phone may come into contact with is wiped down.

Almost no surface goes untouched when cleaning my hotel room — this includes cleaning all door handles, the remote control, the AC control unit, electrical switches, all surface areas in the room, and even the handle on the toilet bowl. You can never be too safe. 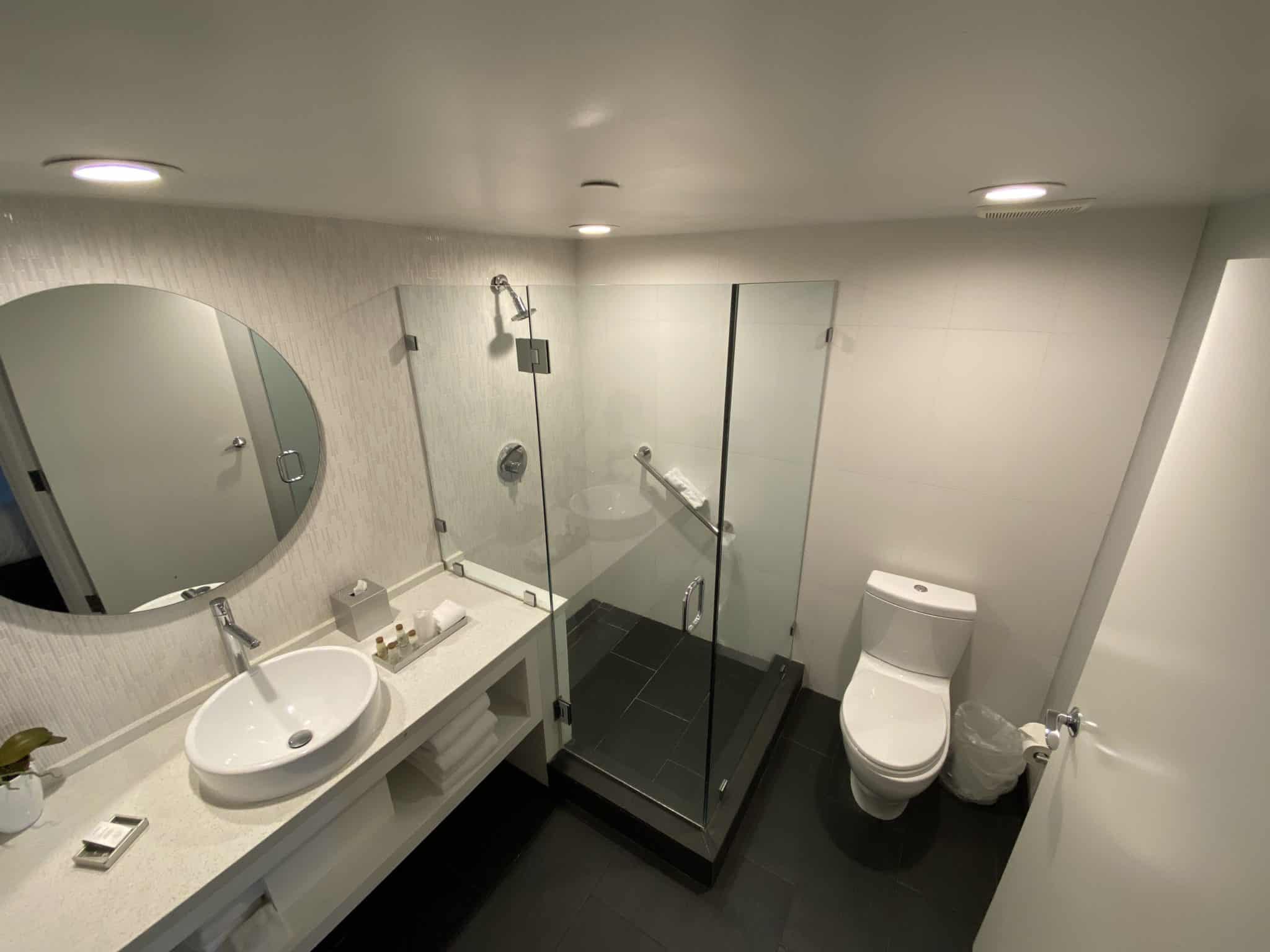 Comfort and Safety Level of Stay

I feel confident in saying that B Hotel is taking guest precautions very seriously. From the desk agent checking me into the hotel to the coffee shop downstairs and all the way up to the housekeepers cleaning door handles, it feels as though they are dedicated to guest safety. 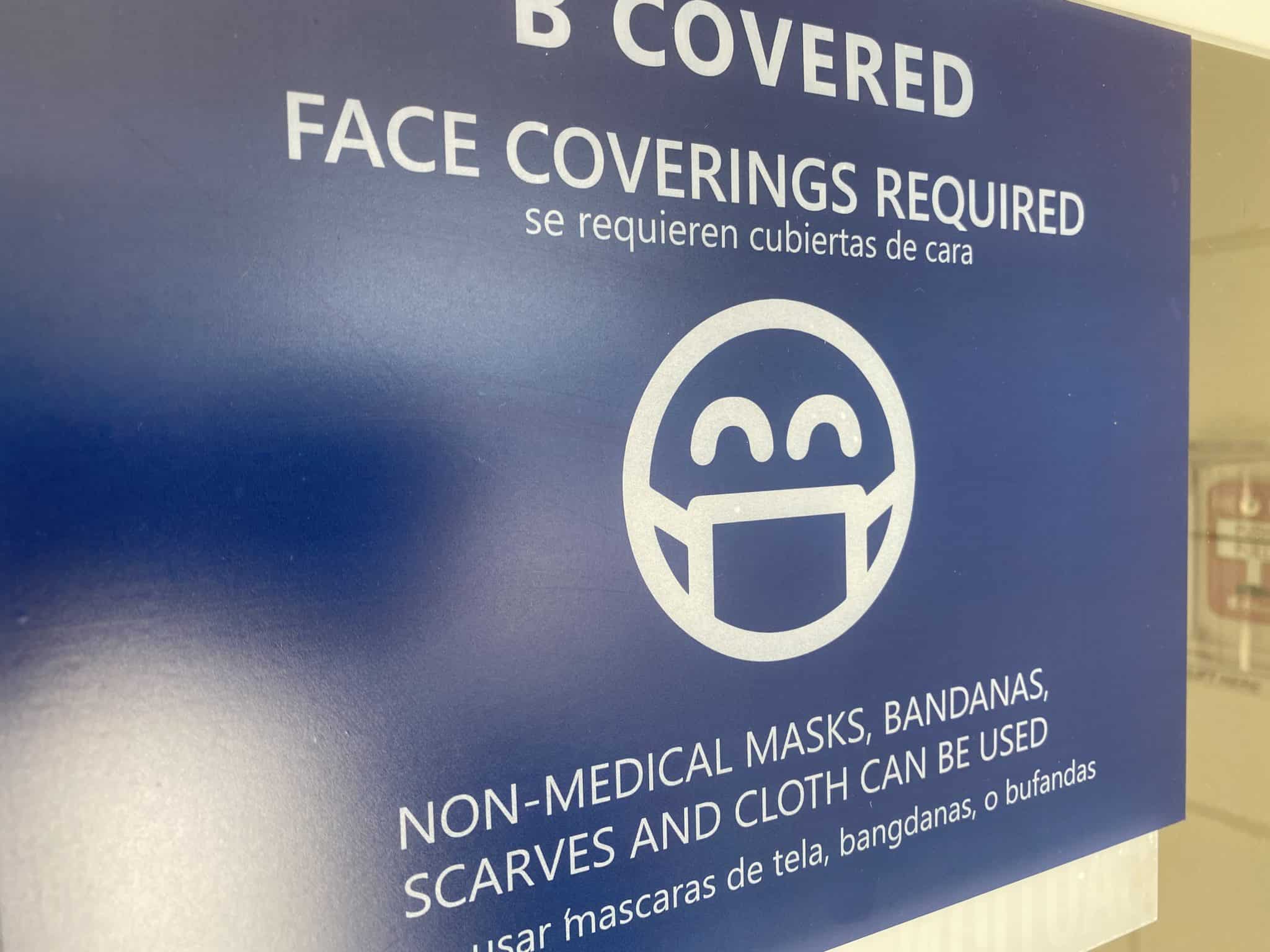 One thing that struck me as odd — but I’m not one to argue given the current circumstances with businesses fighting to stay alive — is that they still charge a $15 resort fee.

The onsite dining is closed on weekdays, the spa is temporarily shut down, and the bus service to the Disney theme parks is currently suspended, so it’s not really a resort experience at the moment. Just something to ponder, but even with that $15 fee, the room was still a good value.

Other articles in our “Travel During a Pandemic” series so far: 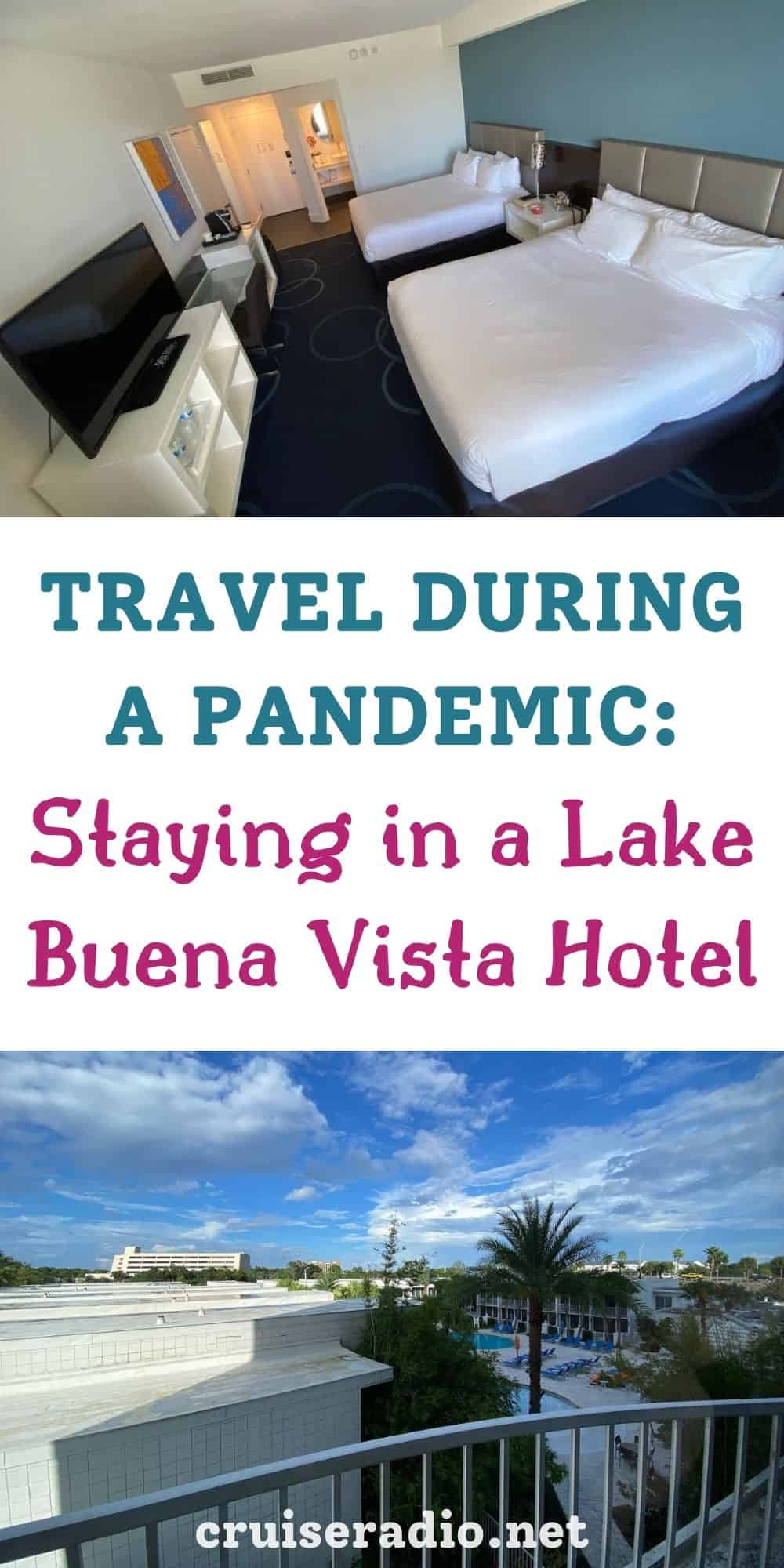