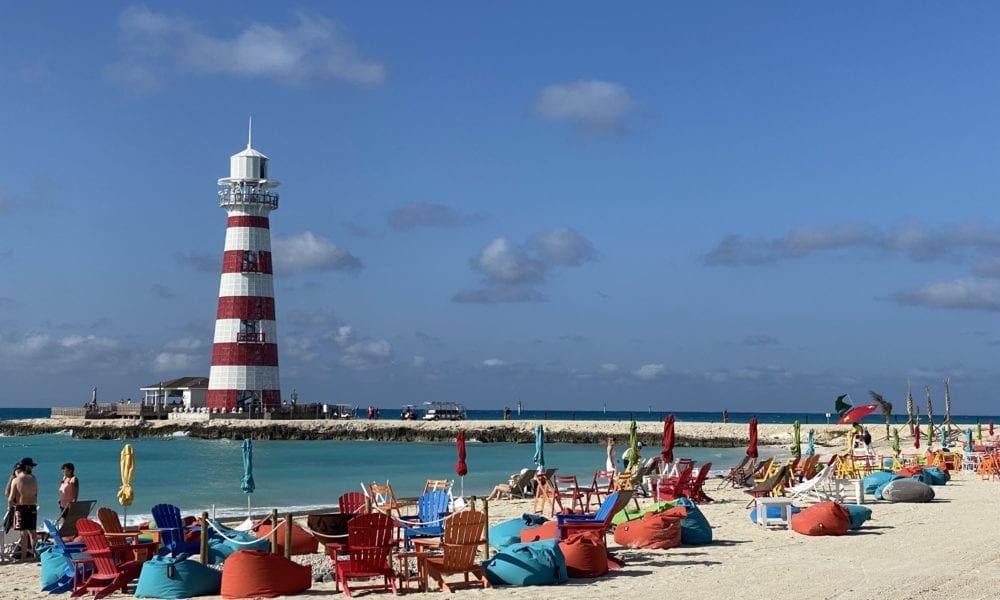 MSC Cruises recently opened its new private island in the Bahamas called Ocean Cay MSC Marine Reserve. The destination, which is located 60 miles from PortMiami, was not always as beautiful as it is now. Since 1970, the island was an industrial dumping ground with literally tons of metal just dumped on the ocean floor. So cleaning up the area and transforming it into a private destination was a major undertaking for MSC Cruises.

In fact, the project turned out to be even larger than they’d originally anticipated, ultimately causing them to push the scheduled 2017 opening back by two years. Fast-forward to 2020, and the island is now open for business and thriving like no other.

During a recent visit, we took lots of notes to help you get the most out of your visit to Ocean Cay MSC Marine Reserve. 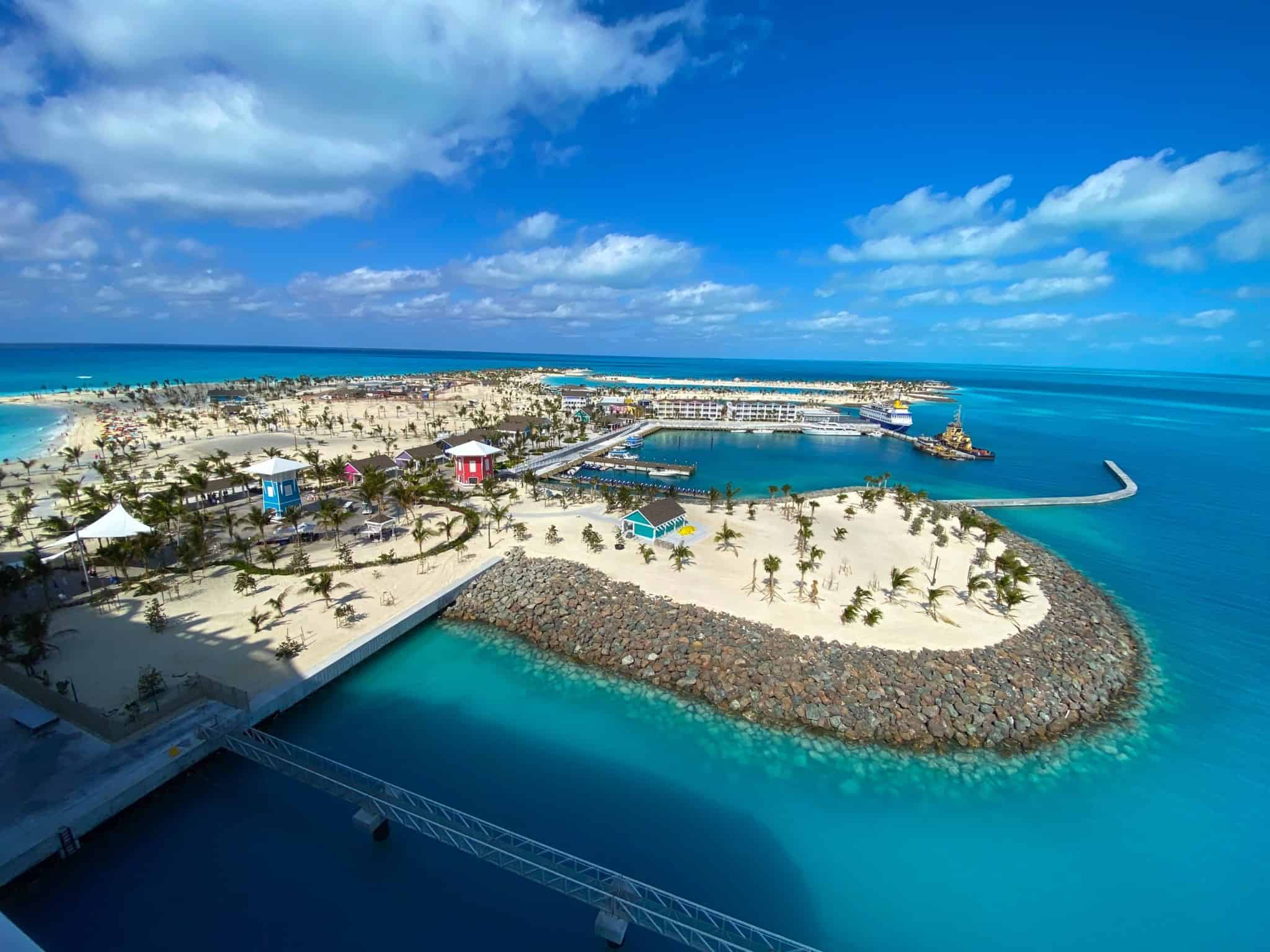 You’ll find a handful of beaches on the island and they are very spread out. So check out a map of the island before you actually arrive to figure out exactly where you want to spend the day.

2. Use the tram system

The island spreads out across approximately 95 acres, which is a lot of ground to cover. Fortunately, there’s a tram system that runs across the island, making stops at each beach. The main tram stop is located just outside the gate you pass through after exiting the ship. From there, the tram makes various stops at different beaches. 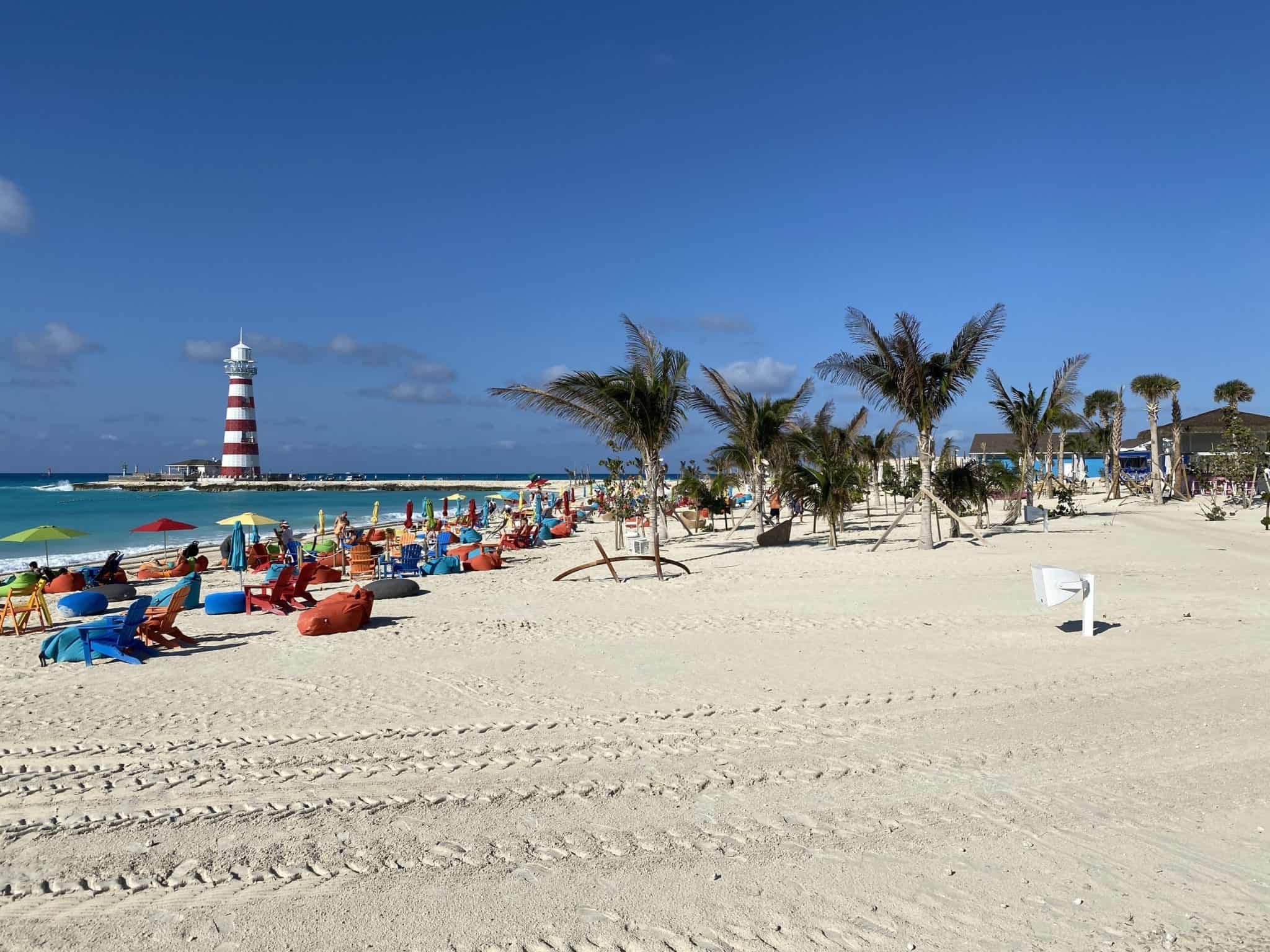 There will be a beach towel in your stateroom, and you should definitely bring that to the island with you. This is especially true at night, during the Junkanoo Beach Party and the lighthouse show. The beach tends to fill up, and you’ll wish you had something to sit on.

4. You can use the drink package 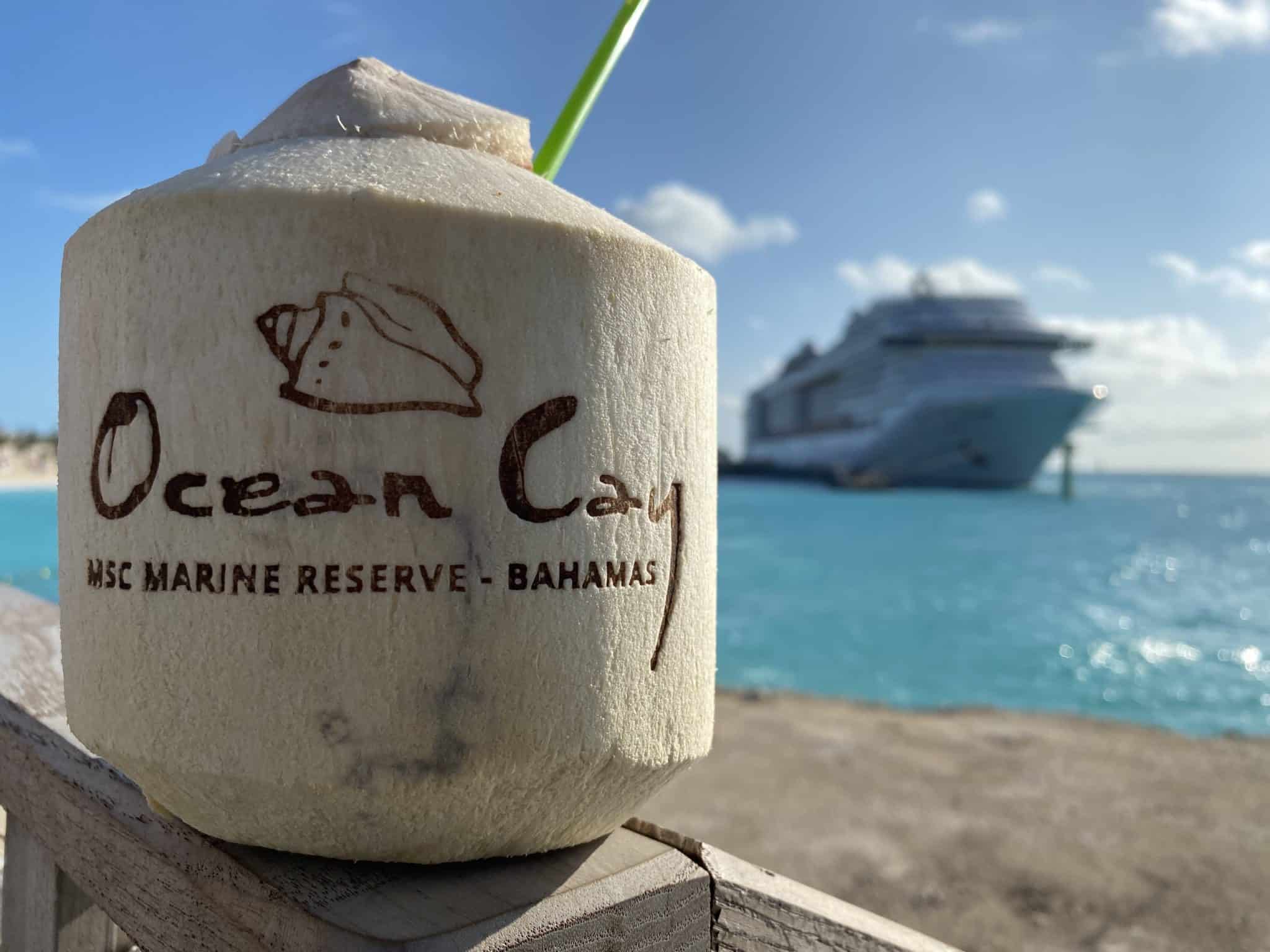 In terms of using your drink package, Ocean Cay is basically an extension of the ship. Keep in mind that when buying drinks on the island, what’s covered by the package is exactly the same as what’s covered on the ship. So if you have the Easy Package, you can get drinks up to $6. The premium package allows you to get drinks valued up to $12.

5. Try out the island drinks 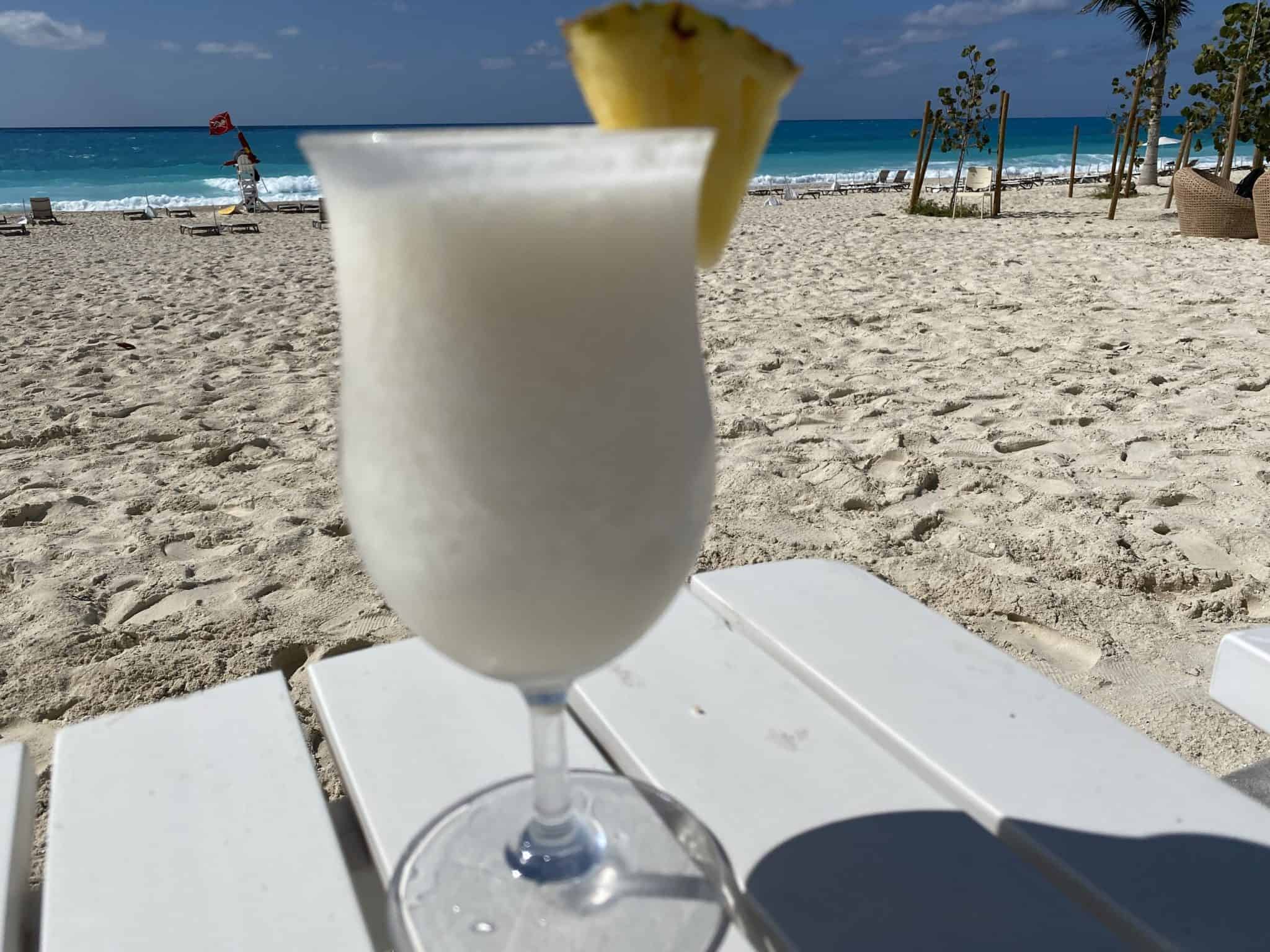 Since the drink package works on the island, this is a great chance to try something new. If one of the bars is offering something you’ve never tried before, go for it! I wound up trying a delicious coconut drink, which was even better when made with some rum thrown in. 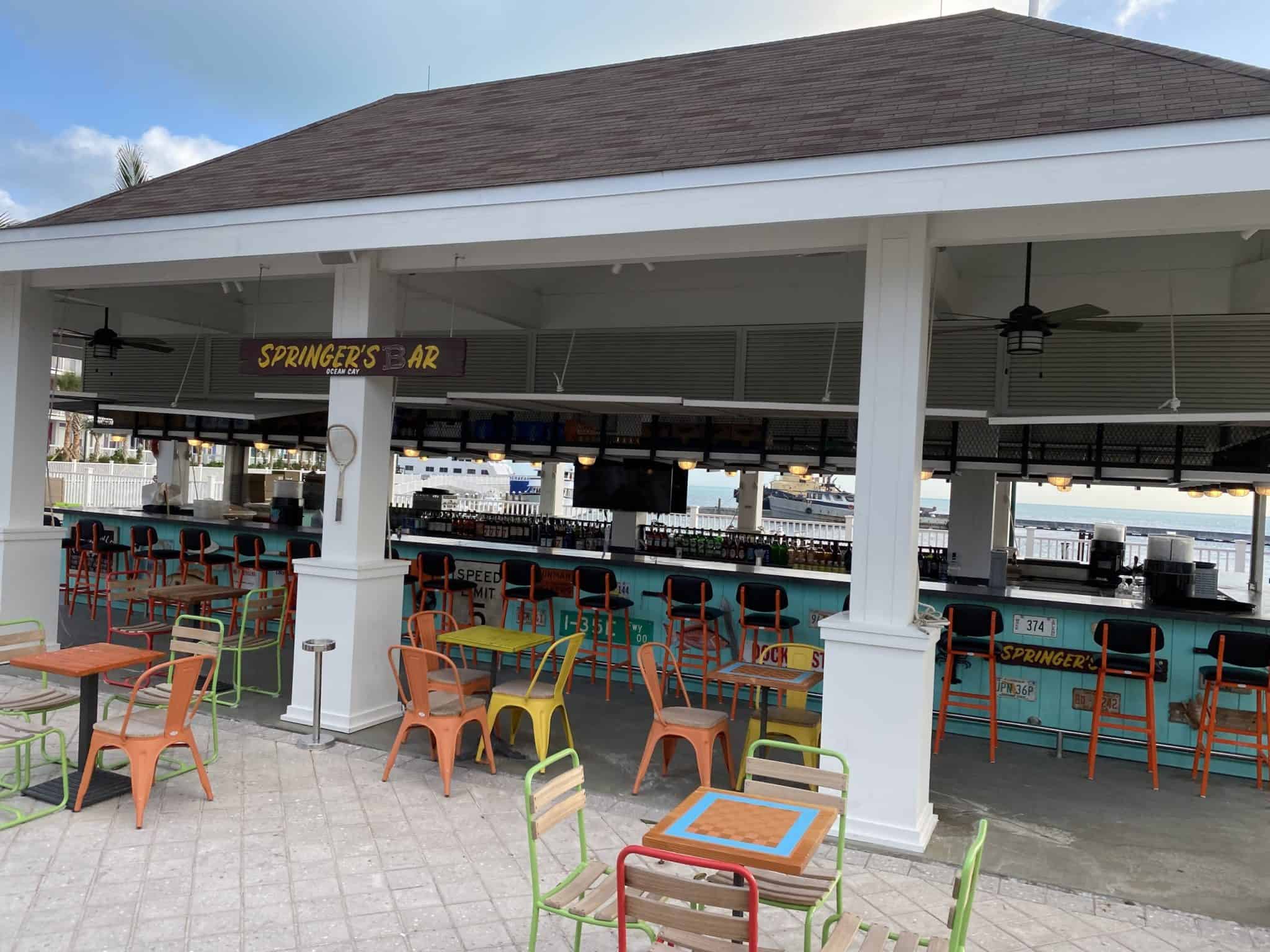 There are wireless routers set up around the island. If you have the WiFi package on the ship, you can also use it on the island by simply logging in to the Ocean Cay router. If you have an international data plan on your phone, you may be able to pick up the BTC wireless network. 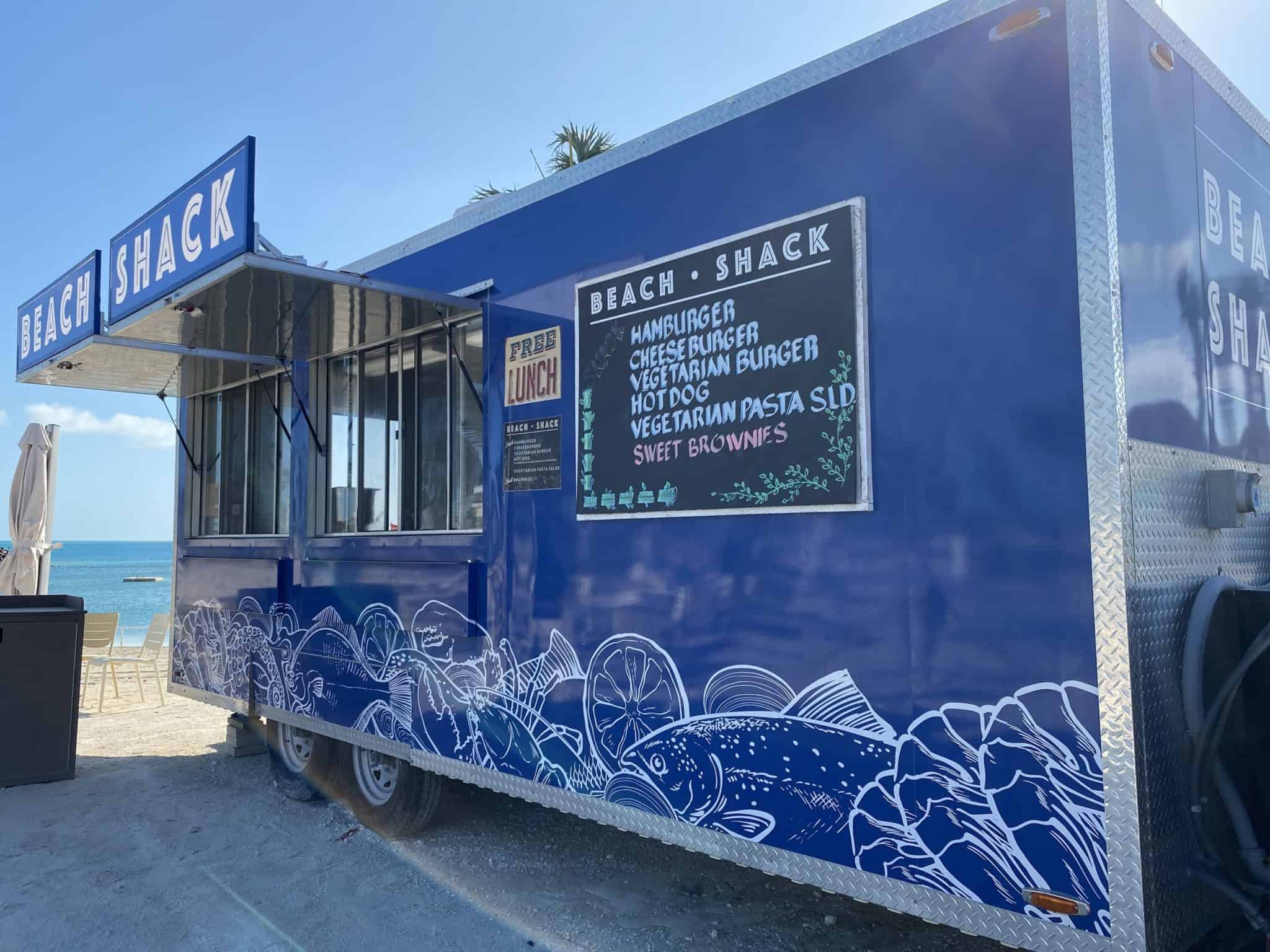 You are never more than 500 feet away from a food truck on the island, which can be a great option if the primary food court is crowded. There is a second food court currently under construction.

8. Check out the Spa There’s a dedicated, almost secluded space on the island for the spa. While a wide variety of massages and treatments are available, you’ll want to book them before you actually get to the island as there are only a limited number available. Swing by the spa on the ship to make appointments.

9. Spend some time at the lighthouse 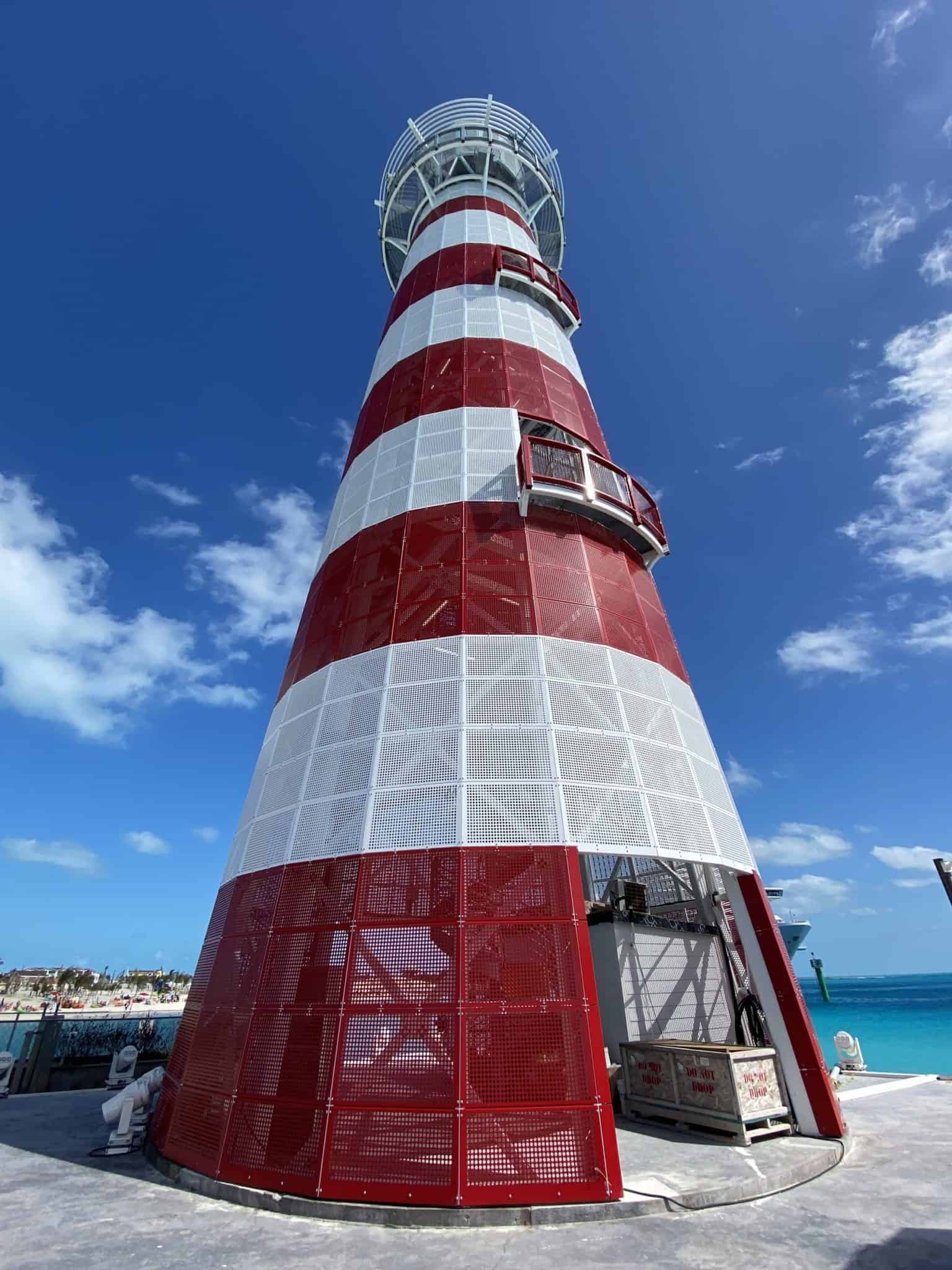 If you want to get a great view of the ship docked along Ocean Cay, take your photo from The Lighthouse Bar. 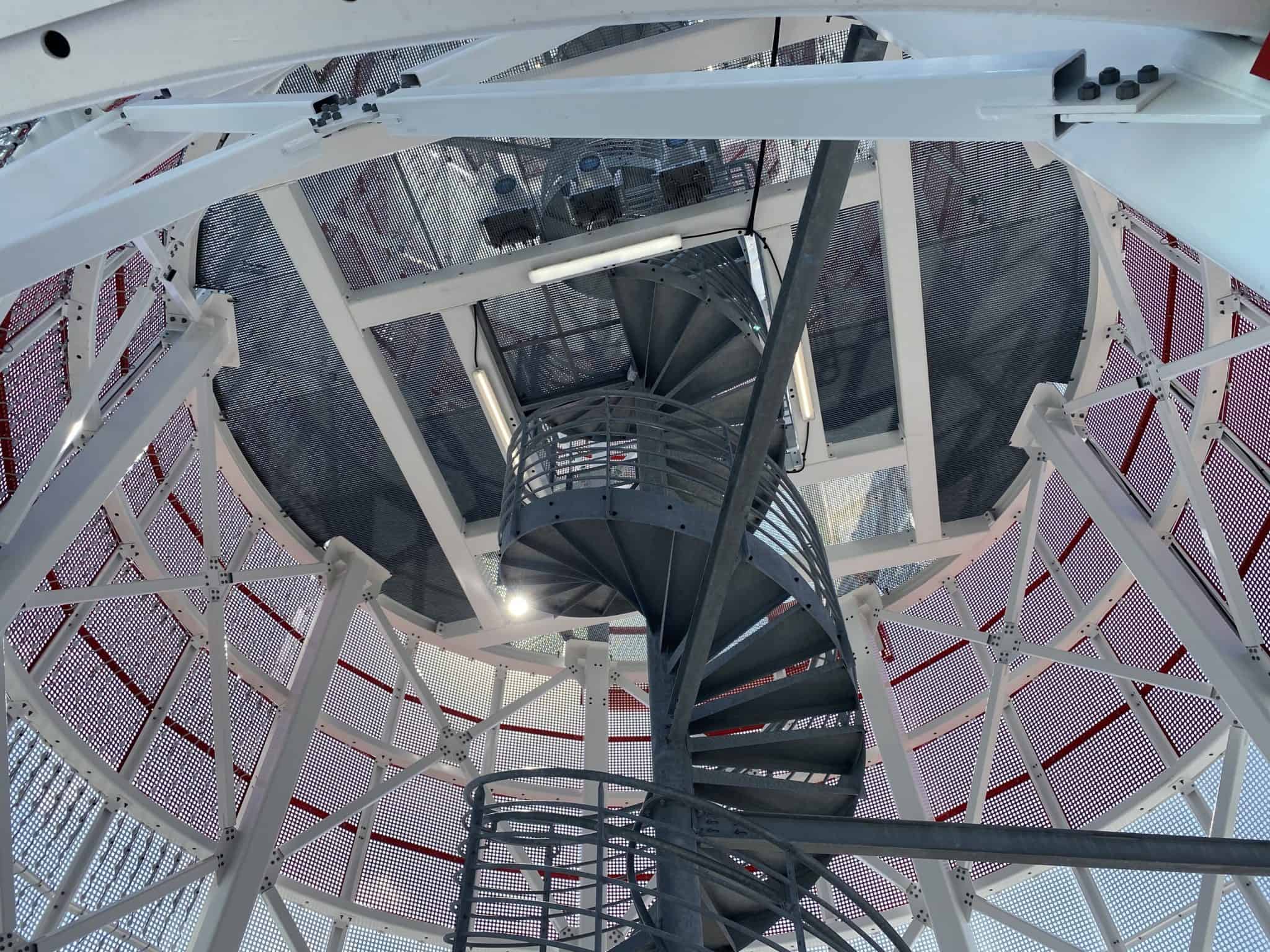 For a modest $12, you can climb to the top of the lighthouse and get some killer photos. You start your journey at the base and make your way up 165 stairs to the very top, stopping at different platforms along the way. Inside the lighthouse, you’ll get an up-close and personal look at the 23,000 LED lights that turn the tower into a stunning light show at night. 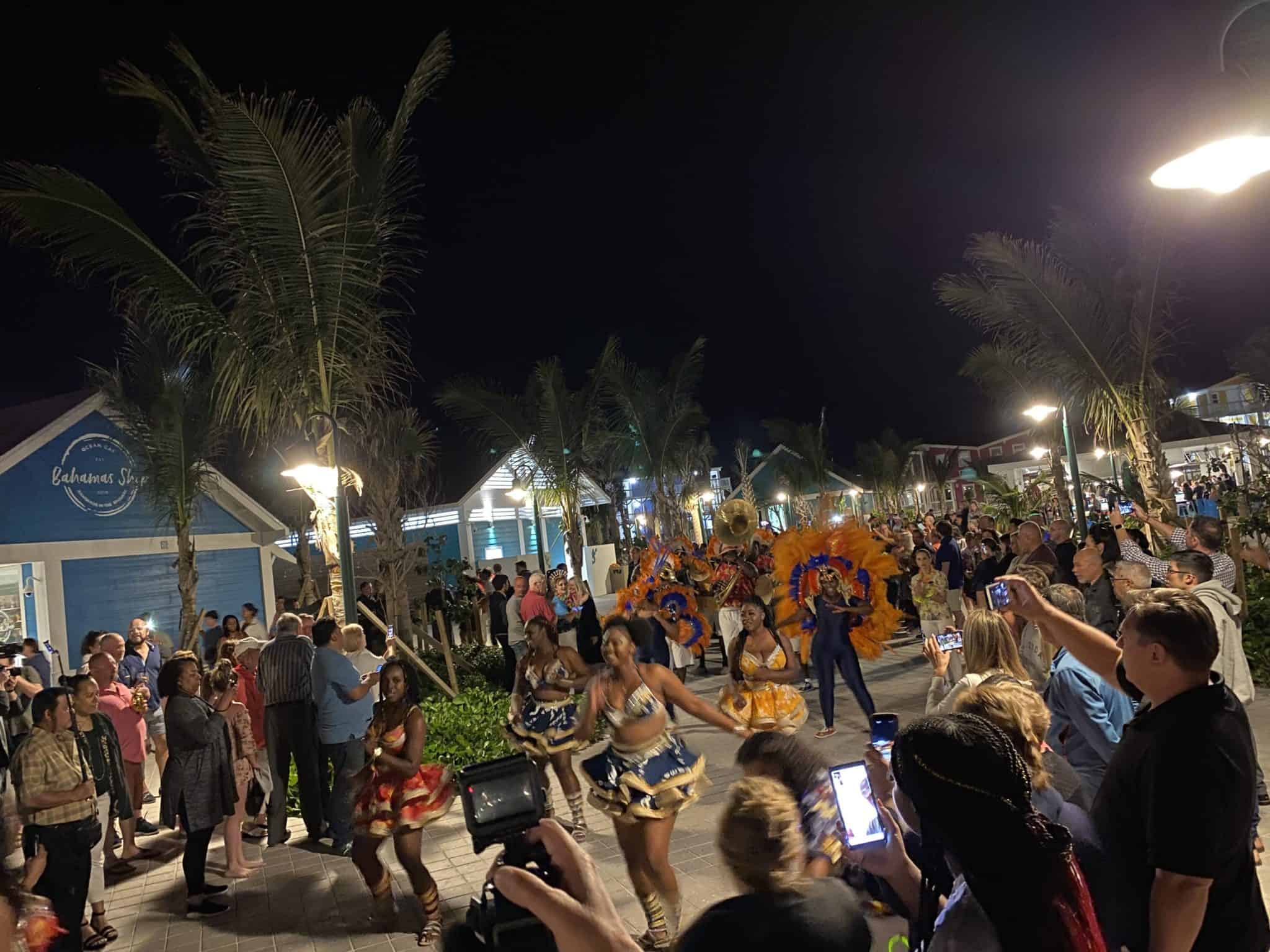 The Bahamian parade starts at the island’s Welcome Village and ends at Lighthouse Bay.  The parade is filled with dancing, percussion, and a horn section. It’s very reminiscent of Mardi Gras in New Orleans. There are many different types of excursions to choose from on Ocean Cay MSC Marine Reserve. Some of the popular excursions inclue snorkeling at a shipwreck located a mile off the coast, climbing the lighthouse, star gazing at night on the helicopter pad, jet skiing, stand up paddleboarding, and deep-sea fishing. 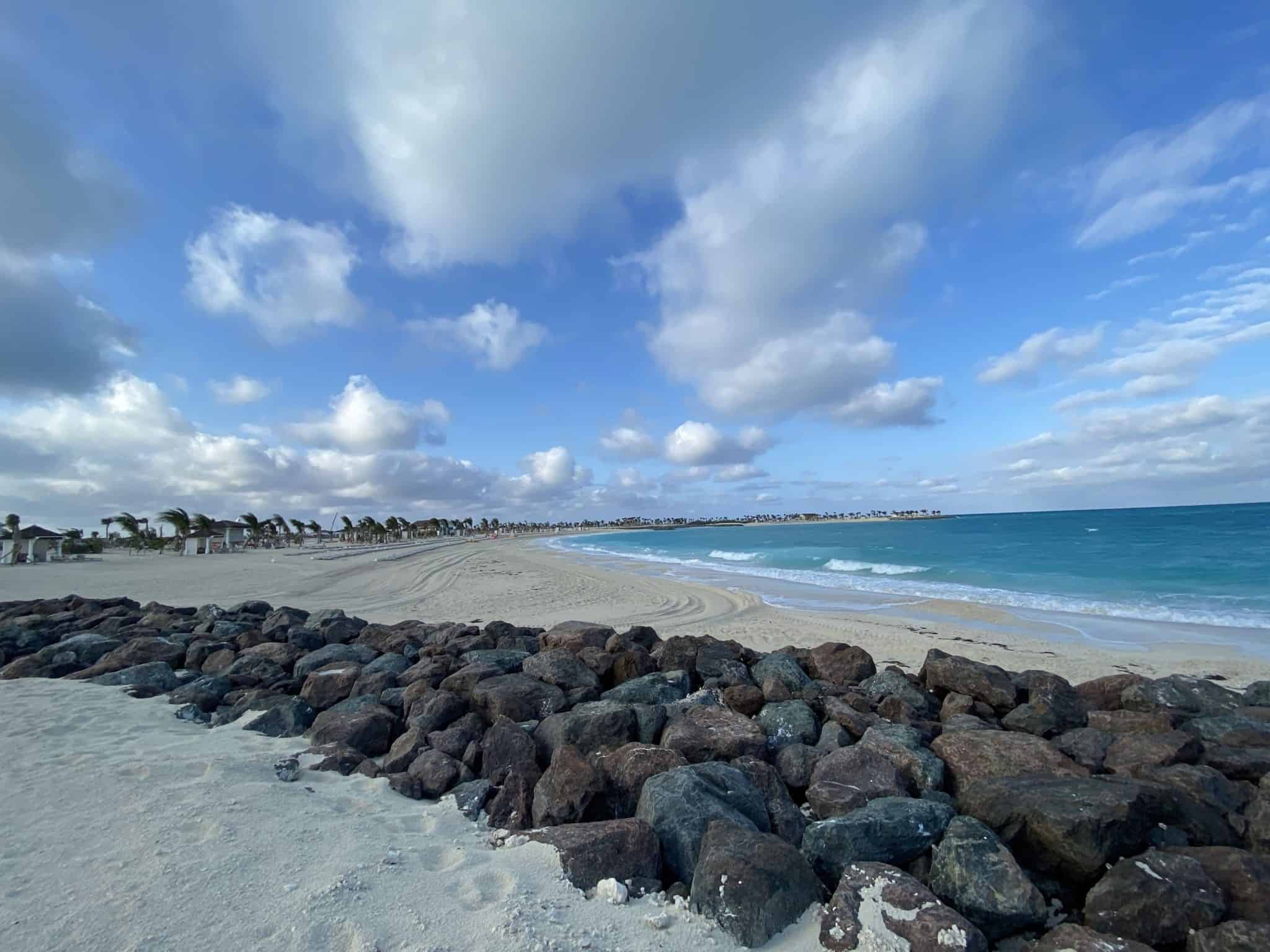 Ocean Cay is a protected marine reserve. The area is just now starting to regenerate coral and sea life after having been a dumping ground for nearly 50 years. You will see conch, a variety of shells, turtles, fish, and other indigenous species. Don’t touch them. If you try to bring them back on the ship, the security scanner will catch you and the items will be returned back to their natural habitat. The ship is docked at the island for a good 12 hours, and you’ll want to be awake for the Junkanoo Parade and the Lighthouse Spectacular. Given how long the ship is docked, consider heading to the beach in the morning, then maybe taking a break (and a nap) back on the ship for a few hours before returning for the nighttime shows.

Also, make sure to stay hydrated. If you’re going to be drinking, consider following the 1-to-1 method, meaning one bottle of water for every cocktail. There are two lighthouse shows at night following the Junkanoo Parade. Each is a stunning sight to see as the 23,000 LED lights covering the structure come to life in a beautifully choreographed show you won’t soon forget. Consider getting off the ship and heading to Lighthouse Bay to watch the lighthouse show. You can see it from the ship, but unless you’re staying in the Yacht Club, the views will be obstructed.