Inside Norwegian Cruise Line’s Party Of The Year [Photos] 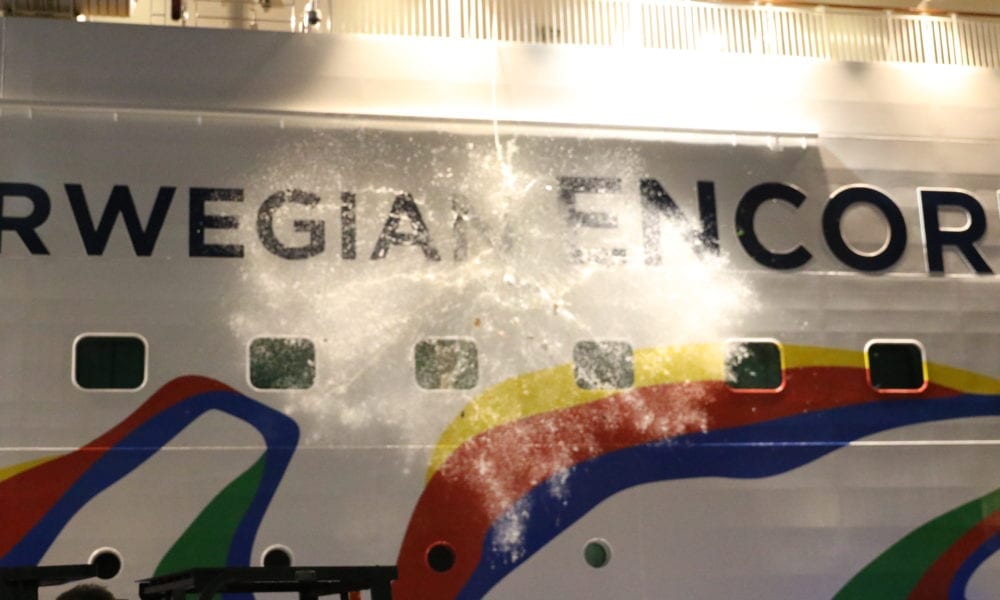 It was a night to remember as Norwegian Cruise Line held a party to welcome Norwegian Encore to the fleet. There were performances by godmother Kelly Clarkson, the casts of Choir of Man and Kinky Boots, as well as the traditional naming ceremony. 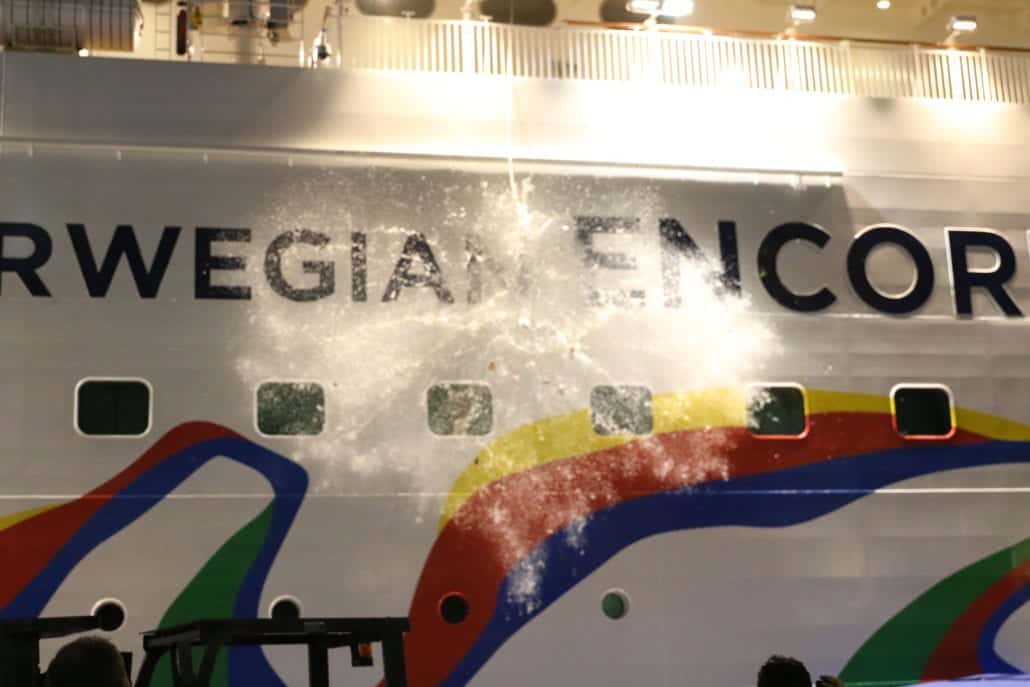 Sometimes, you have to spill a little champagne to properly welcome a ship into a fleet. (Photo courtesy of NCL)

It was a high-energy event held on a gorgeous night as Miami rolled out the red carpet for those lucky enough to attend the by-invitation-only ceremony. (Technically, and far more appropriately, guests walked an ocean-blue carpet with plenty of photo ops.) 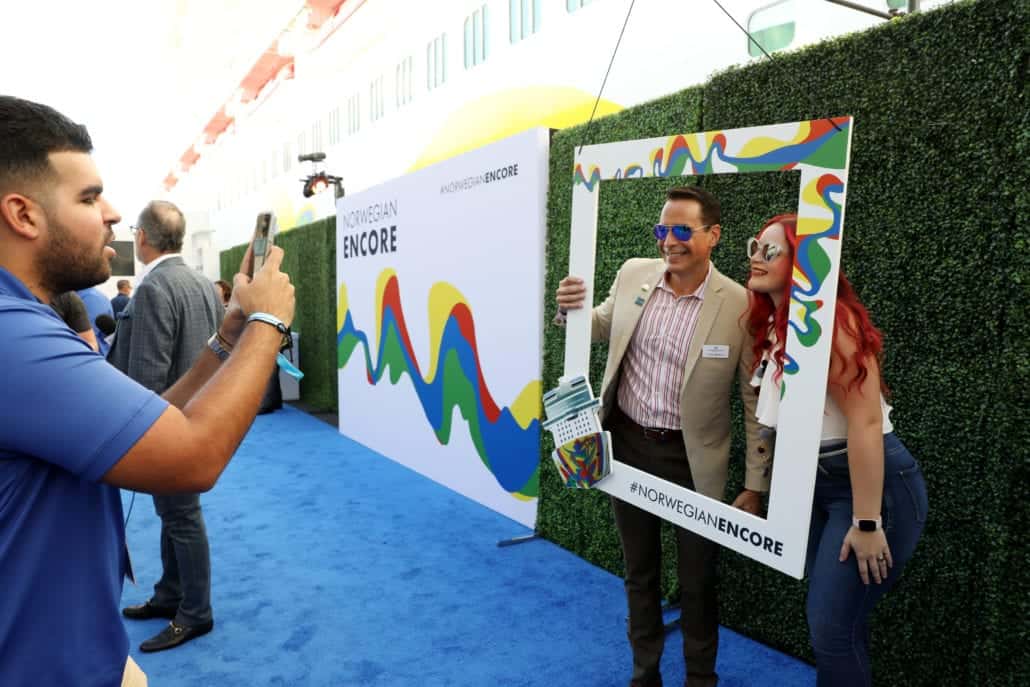 Photo ops on the ship-side blue carpet were suitable for framing.  (Photo courtesy of NCL)

Around 3,500 guests attended the pier-side ceremony, including local government officials, travel partners, media and investors. “Five years ago, we launched our history-making Breakaway Plus class,” said Frank Del Rio, President and CEO of Norwegian Cruise Line Holdings. “And today, we are proud to christen Norwegian Encore, the final ship of this class and a true representation of the evolution of the brand, right here in our hometown of Miami.” 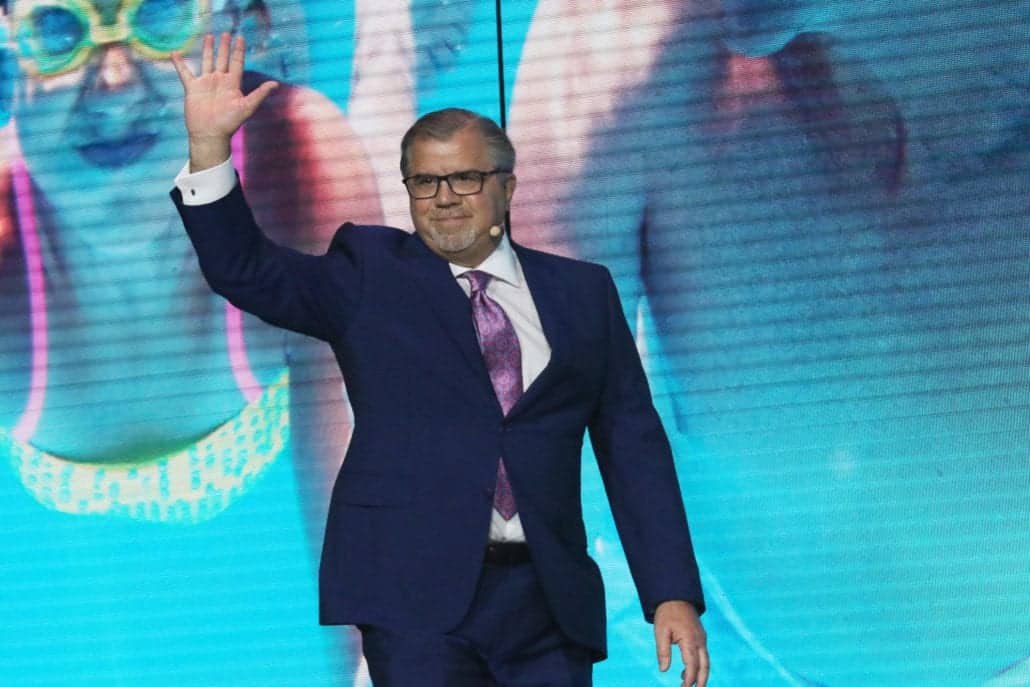 With record earnings and a gorgeous new ship behind him, Del Rio had reason to celebrate. (Photo courtesy NCL)

Making perhaps the splashiest entrance was Andy Stuart, the soon-to-exit president and CEO of Norwegian Cruise Line, who — following a fun video presentation — rolled onto the stage in a go-kart similar to the ones passengers can race on board. 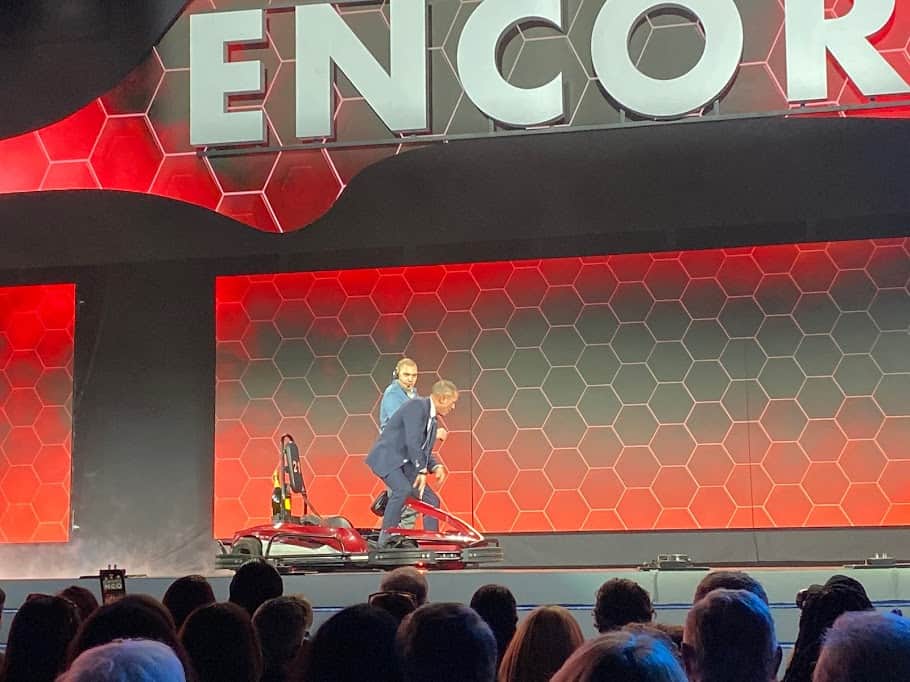 Stuart took one of the go-karts for an off-track spin.

Several of the on-board entertainers took to the stage, creating something of a mini-showcase. The cast of Choir of Man showed why their show has proven so popular that it was moved from a smaller venue into the main show theater. (This also makes it one of the rare cases where something onboard a ship went from having a charge to being complimentary!) 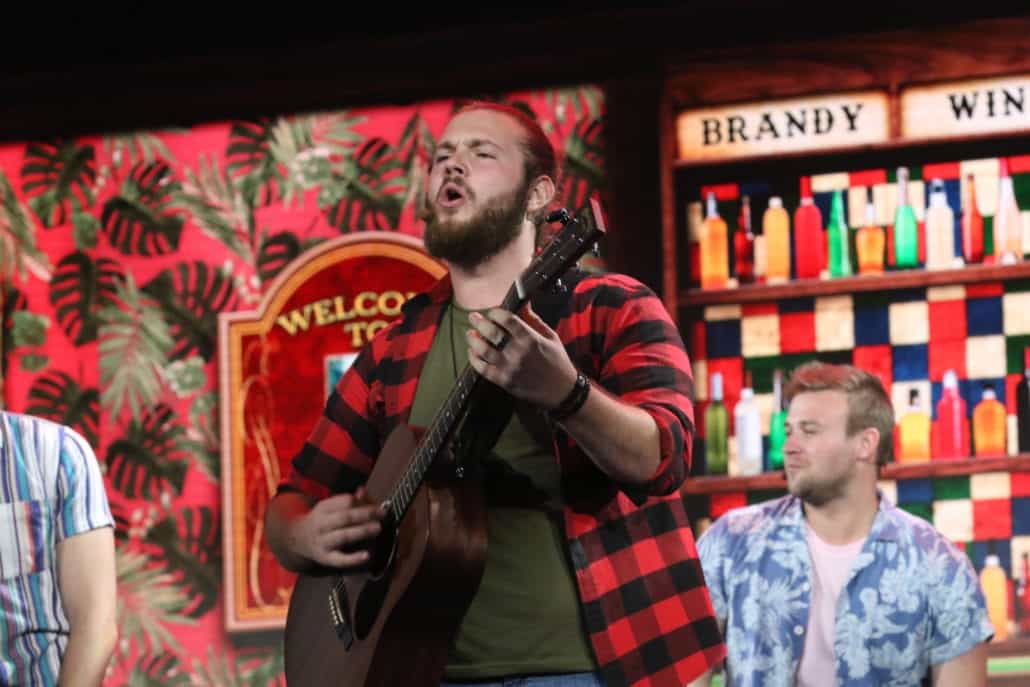 Choir of Man is pretty much the definition of a “feel good” show. (Photo courtesy of NCL)

Also on hand to get the crowd amped up was the cast of Kinky Boots, the show which won six Tonys (including Best Musical) during its recently-wrapped Broadway run. Norwegian has brought numerous Broadway shows to their ships in recent years, including Rock Of Ages, Jersey Boys and Priscilla Queen Of The Desert. In the case of Six, currently featured on the Norwegian Bliss, it’s actually being performed on the ship before making it will debut on the Great White Way. 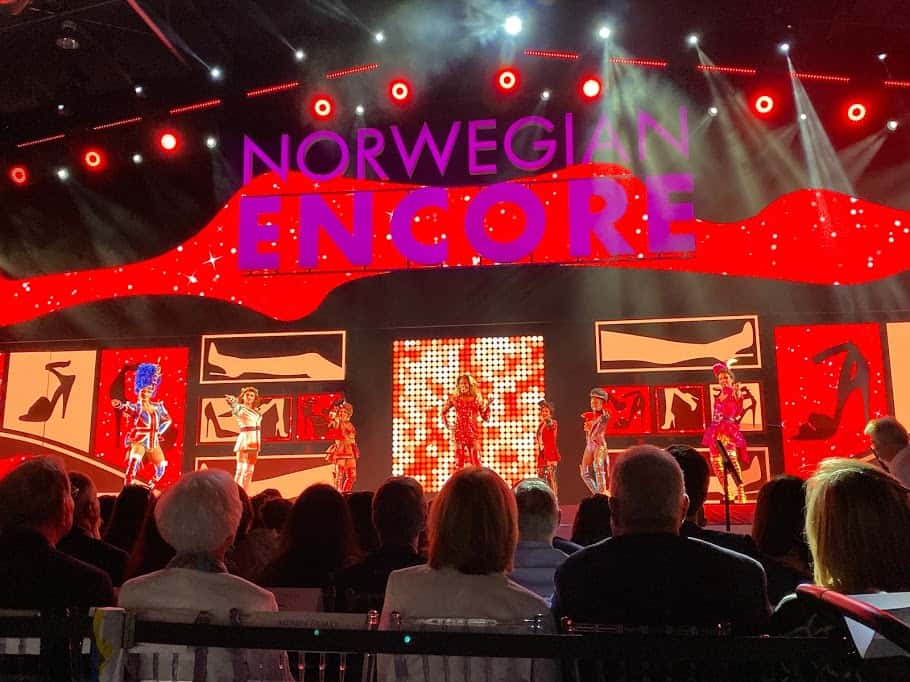 The cast of Kinky Boots painted the town — or at least the stage — red.

But of course, the main attraction was the Encore’s superstar godmother, and when Clarkson too to the stage, she did not disappoint. 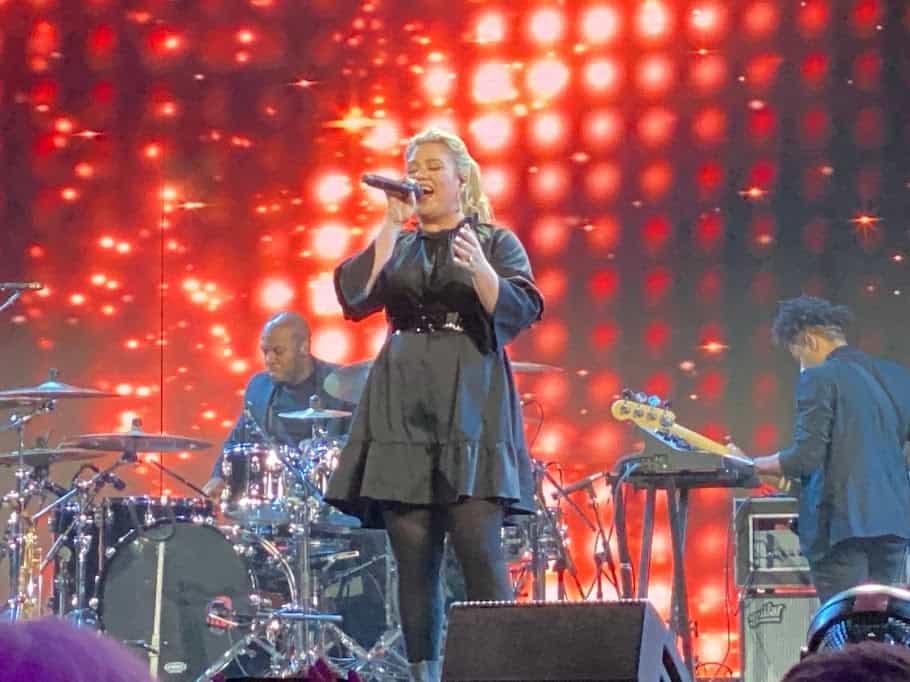 Clarkson has now added godmother to her ever-growing list of job titles.

After presiding over the christening and naming ceremony, the singer, who first came to attention by winning American Idol (and is now, ironically, a judge on that show’s rival, The Voice), brought the house down with some of her biggest hits. 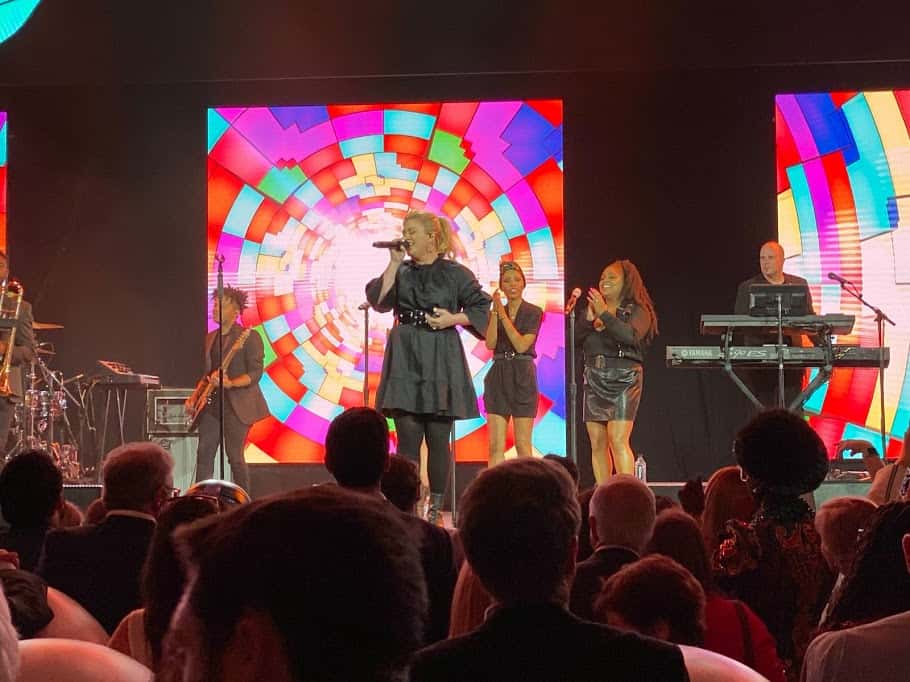 Even after the performances ended, the night was only just beginning for those lucky enough to be boarding the ship for a three-day preview sailing. So stay tuned for our continuing coverage, including a photo-filled look at Silver Cove, the new luxury villas at Great Stirrup Cay.