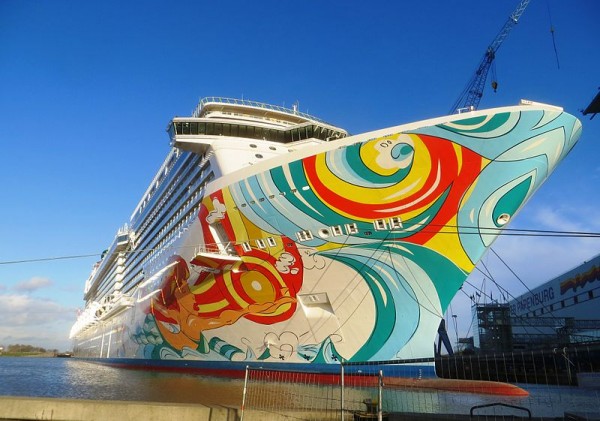 Even as we’re preparing to welcome 2019 Norwegian Cruise Line announced that it would be shuffling some of its most popular ships around beginning in late 2020. Need something to look forward to? Here are some of Norwegian’s most exciting future itineraries, all of which are currently open for booking!

Norwegian Joy was actually the first cruise ship to feature a go-kart track on the top deck.

You have to love that this ship, one of the newer members of Norwegian’s fleet, has been sailing from a variety of ports since first she was introduced. Originally designed for the Asian market, the Norwegian Joy will soon undergo a massive refurb before joining her slightly-younger sister, Bliss, in doing Alaska sailings. But beginning October 24 2020, folks in Miami will get their chance to experience everything Joy has to offer. While there, she’ll do a slate of five-to-seven day Western and Eastern Caribbean sailings. Both itineraries will feature a stop at one of NCL’s private islands, with Western sailings hitting Harvest Caye in Belize, while the Eastern Caribbean voyages will stop at Great Stirrup Cay in the Bahamas.

2. Norwegian’s Newest Ship is Miami-Bound, Too

After spending her first summer in New York City, Norwegian Encore will hit Miami, ready to sail seven-day cruises to the Western Caribbean. But those looking to spend a little longer on NCL’s newest ship will be able to hop on for 12- and 13-day cruises through the Panama Canal, with stops in Puerto Plata, Dominical Republic; Kralendijk, Bonaire; Willemstad, Curacao; Oranjestad, Aruba; Santa Marta and Cartagena, Colombia; Colon, Panama; and Puerto Limon, Costa Rica.

Although the Escape has sailed out of her fair share of ports, late 2020 will see her homeporting out of Port Canaveral for the first time. Once there she’ll do 5- and 7-day sailings to both the Eastern and Western Caribbean. She’ll also do two trips which will be perfect for those looking to do a short trip, with the four-day trips hitting Nassau, Freeport and Great Stirrup Cay.

While the Norwegian Breakaway may have the New York City skyline gracing her hull, she’s happy to bring some of that Big Apple spirit to other cities. After summering in Miami, the ship will return to New Orleans on November 22, 2020. There, she’ll do seven-day sailings to such Western Caribbean hot spots as Roatan Island, Honduras; Harvest Caye, Belize; and Costa Maya and Cozumel, Mexico.

5. Things In San Juan Get Epic

Norwegian Gem has a whole lot of fans who love sailing her out of New York City.

As usual, Norwegian will have two ships sailing out of midtown Manhattan in late 2020. And as usual, one of the bigger vessels will share the honor with the mid-size Gem. This time around, it’ll be the Norwegian Getaway, which will begin sailing seven-and-eight-day cruises to the Bahamas and Florida in late December. (You will, however, have to share the Getaway, which will also cruise five-day Eastern Caribbean voyages out of Miami, with stops in Puerto Plata, Dominican Republic and Great Stirrup Cay, Bahamas as well as seven-day Western Caribbean cruises with calls to Roatan Island, Honduras; Harvest Caye, Belize; and Costa Maya and Cozumel, Mexico.)

Want still more options? 2020 will see the Norwegian Jade hitting Tampa beginning November 22 for a series of Western and Southern Caribbean trips that will keep her there through April. Meanwhile, sister ship the Pearl will sail a mix of Western and Southern Caribbean cruises — as well as Panama Canal and Bahamas itineraries — from Miami beginning Nov. 4, 2020. Following a bow-to-stern refurbishment, the Norwegian Jewel will head to Australia and New Zealand beginning October 9 of 2020, set to sail to some of the most beautiful destinations to be found in that part of the world. And starting December 19, 2020, the Norwegian Star will sail 14-day South American cruises with calls to Montevideo and Punta Del Este, Uruguay; Puerto Madryn, Argentina; Stanley, Falkland Islands; Ushuaia, Argentina; Punta Arenas, Cape Horn, Puerto Chacabuco and Puerto Montt, Chile.

Once you’ve figured out which ship and itinerary are your perfect match for 2020, you can book right away, as all of these sailings — with the exception of those aboard the Norwegian Jewel, Pearl and Star — are available for immediate booking. As for those three ships, they’ll be available to book beginning on December 21.