Getting to Trunk Bay from Cruise Ship (2018) 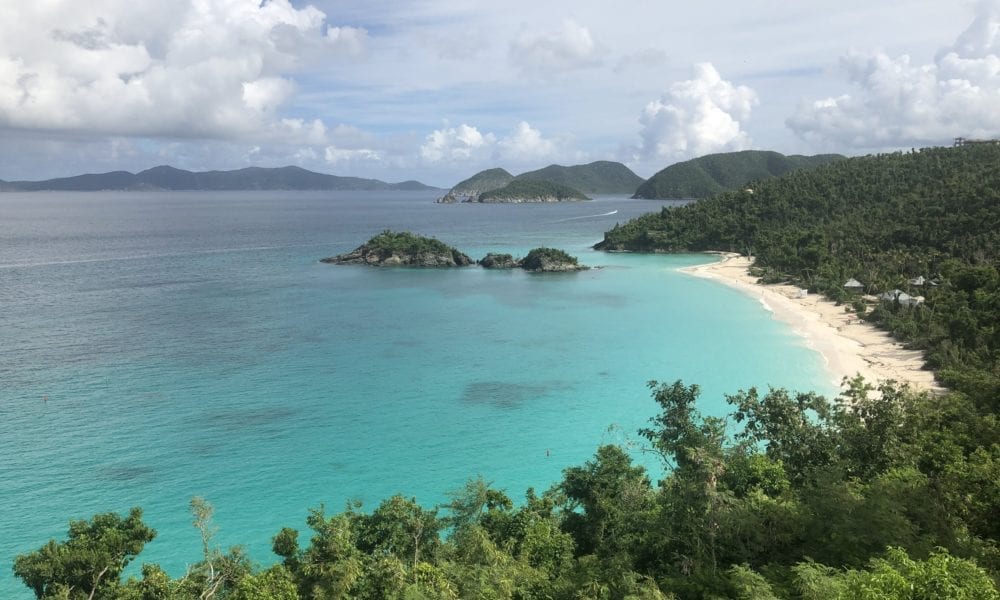 If your cruise ship docks in St. Thomas and you want to experience something a little different (that doesn’t require you purchasing a cruise ship excursion) consider visiting Trunk Bay on the nearby island of St. John. I first visited the beautiful beach in 2014, during a sailing on Carnival Liberty, and I was so blown away that I’ve returned numerous times since.

Often, cruisers get nervous about doing anything that takes them too far away from where their ship is docked. And of course, it’s always important to figure out how much time you’ll have in port (and how long any potential excursion will take) so you don’t miss the ship. But assuming time allows, getting to St. John is pretty easy and definitely worth the trip.

How Far Is St. John from St. Thomas?

There are two different cruise piers in St. Thomas, and whether you wind up at Crown Point or Charlotte Amalie will depend on the cruise line you sail. The good news is, you can easily get to Trunk Bay from either dock.

How To Get To Trunk Bay

1. Grab a taxi at the cruise terminal

After disembarking, walk just outside the cruise terminal and you’ll see signage telling you exactly where to catch a taxi. If, by chance, you have difficulty finding a cab, just ask one of the locals to point you in the right direction. It’s only a short walk from the ship. Tell the taxi driver you’d like to go to the Red Hook Ferry Terminal.

The ride to Red Hook Ferry Terminal is approximately $10 per person each way and takes about 20 minutes. It’s important to note that the cabs in St. Thomas are cash only, so make sure you have enough to not only get you to the Ferry Terminal but also back to the cruise ship!

Buying a ticket at the Red Hook Ferry Terminal in St. Thomas.

Once you arrive at Red Hook, you’ll be able to purchase a ferry ticket for $8.15 each way (go ahead and buy a roundtrip ticket for $16.30 per person). The ferry leaves every hour, on the hour, from Red Hook, St. Thomas to Cruz Bay, St. John. The terminal takes credit cards, but cash always seems better so you don’t have to rely on the spotty internet connection. The actual ferry ride takes about 20 minutes. You can read the ferry timetable here.

The ferry ride from St. Thomas to St. John is approximately 20 minutes.

Upon arrival to Cruz Bay in St. John, you’ll find open-air safari taxis that are lined up to the left side of the ferry terminal. The distance between the Cruz Bay Ferry Terminal and Trunk Bay is just over three miles. Because of how hilly the islands are, it’ll be a 10-15 minute drive from the ferry terminal to Trunk Bay. The taxi will drop you off at the entrance to the park. This will also be the same place you catch the taxi back to the ferry terminal.

The open-air taxi from Cruz Bay to Trunk Bay is a three-mile drive.

Admission to Trunk Bay will cost you $4 per adult, with kids being free.

Note: Fees were waived after the 2017 hurricane season, as some of the facilities offered were badly damaged or even destroyed. As of this writing, the fees were still being waived, but this could change at any time.

When you’re ready to return, you’ll follow the instructions in reverse order. You don’t need to worry about calling a taxi because both St. Thomas and St. John have plenty of them available at all times. One leaves Trunk Bay, and both ferry terminals, approximately every 15 minutes.

What Is There To Do At Trunk Bay?

Standing on the shore of Trunk Bay.

The obvious answer to that question is… relax! Aside from the mile-long shoreline, there’s a snorkel trail just off the coast which features different types of coral and a whole lot of tropical fish. (Note: If you plan on doing the snorkel trail, give yourself plenty of time and do it earlier in the day.) The water is shallow enough off the beach that it is perfect for wading.  There are no steep drop-offs as the water gradually gets deeper.

The earlier you can get to the beach, the better. Around 11 a.m., people who booked excursions through the ship — which tend to get a later start and move slower than you are able to on your own — will finally hit the beach, and it can get pretty crowded.

While much of the greenery which provided shade was destroyed during the particularly-destructive 2017 hurricane season, the beach’s natural beauty remains.

There are public restroom and showers, along with a rental hut where you can rent beach chairs and snorkel gear. I’d suggest not drinking the water from the water fountains or from the sinks. The potable water on the island, though purified, is trucked in from other places and stored in big tanks. It’s best to bring your own bottled water for drinking.

An overlook of the beach at Trunk Bay.

If you are comfortable with going out on your own, I would highly suggest heading over to Trunk Bay. If you like to play it safe and are directionally challenged, you’re better off doing the cruise line shore excursion.