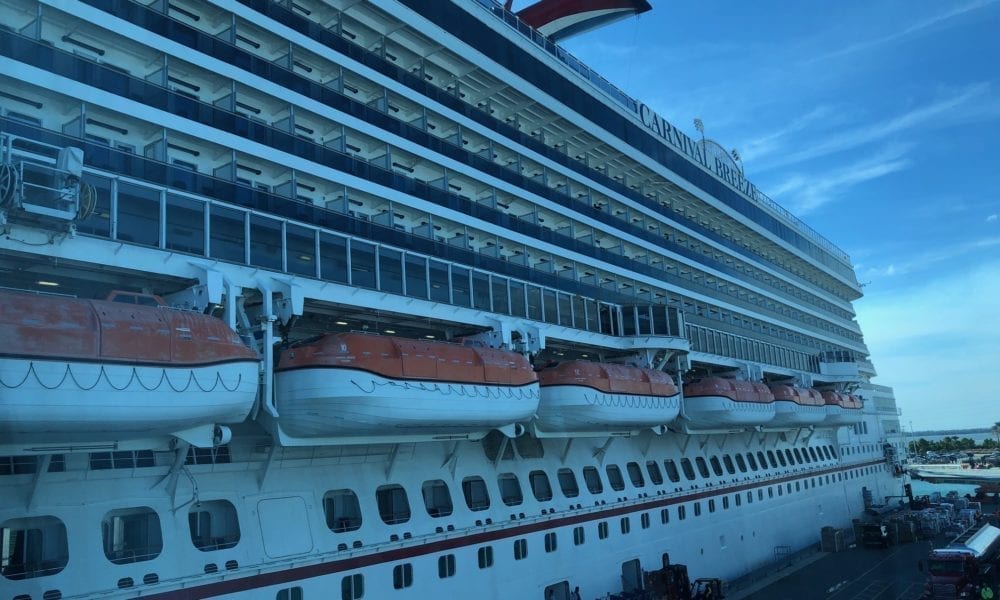 I’ve never thought “Faster to the Fun” was worth the money. It doesn’t get you on board THAT much faster, and getting off the ship early isn’t something I’m interested in doing (since I’m bad at waking up in the morning) – until I booked a cruise in Los Angeles.

I don’t live in California, and I didn’t want to use any more vacation days. This meant I would need to get to the airport from the cruise port on debarkation day. I’ve heard horror stories about traffic in LA and we were actually driving all the way up from Long Beach… so, even with a 2 p.m. flight, I was a little nervous about arriving on time.

I checked the excursion options and found that Faster to the Fun was still available. It was $49.95 per cabin for our three-day Carnival Inspiration cruise, and I decided it was worth it to make sure we’d make our flight on time.

We got to the Long Beach Cruise terminal around 12 p.m.

Our boarding passes had the Faster to the Fun logo on them, clueing the staff to send us through the priority lines. However, there weren’t many people arriving at this time, so while we still utilized the priority line through check-in and security, we didn’t really need to.

The ship was already boarding so there was no waiting to get on (nor did I get to take advantage of getting to board right after the diamond and platinum VIFP cruisers).

We made our way onto the ship and headed straight to our cabin – one of the FTTF benefits. Even though the big, heavy doors say, “cabins aren’t ready until 1:30 pm,” with Faster to the Fun, our cabins were already prepared and ready for us to get settled in.

Our Sail & Sign cards were waiting for us in an envelope in our “mail box” and they each had a little Faster to the Fun sticker on the back.

After dropping off our bags, we changed into our bathing suits and headed to the Lido deck for lunch before dropping by the Serenity Deck (to hit up the hot tubs while they were still empty). In fact, the whole area was very empty.

I’m not one to complain, but I managed to have to head to guest services the first day because of my first drink on board. Long story short… either the server didn’t know what I wanted, didn’t really know the drink prices, thought I wouldn’t be paying attention, or some combination of the three. But along with a little sleuthing later, I found out that what I really asked for should have been two-dollars less than what I was charged.

So, I went to guest services and realized that I get to stand in the Faster to the Fun line! There were five or six people in the regular line and skipping it was fantastic. There was another issue at some point that we needed to go to guest services for, and got to take advantage of this perk again!

The last day of our cruise we received the debarkation information letter along with several #2 luggage tags. They were intended for us to use on our luggage – to be taken off the ship so that we could get off as early as we wanted. While this would have worked great and we likely would have had a shorter line at customs, we opted not to take the time to pack the night before and instead slept as late as possible on debarkation morning.

We’d spent six days before our cruise experiencing the LA traffic, and wouldn’t need to Uber through rush-hour, so we determined we didn’t have to be off the ship super early to make our flight.

READ MORE: 9 Reasons to Buy Faster to the Fun

Another perk of Faster to the Fun is priority water shuttle tickets, but this cruise didn’t have any water shuttle ports so I didn’t get to experience this benefit. The last benefit is getting your checked luggage delivered to your cabin earlier (which we also didn’t try out, since I accidentally put our wine in our large suitcase and didn’t feel like rearranging it into our carry-ons – so we just carried everything on).

I did have a luggage tag ready to go which also had the Faster to the Fun logo on it, so the porters and the crew would have known to get it to me ASAP.

Since we were allowed to go to our cabin right away, we weren’t stuck with it on board so it wasn’t a huge loss to not take advantage of this benefit.

I definitely felt that being able to get to my cabin early and be in the priority guest service line made the cost worth it for this cruise in particular. Had I not needed guest services, I would probably feel differently.

The cost of Faster to the Fun is per-cabin and varies by ship and sailing length. Strangely, the price for my itinerary has gone down, while others have gone up. My guess is that not enough people were buying it for the three-day at 50-dollars, and it’s now 40-dollars (excluding Carnival Liberty‘s 3-day sailings).

I can see the appeal for families that are booked in one cabin, who might have impatient children that don’t do well waiting to board. I haven’t felt like I was missing that much by not being able to board early, so I would probably only get it again if there was another flight I needed to be sure not to miss.