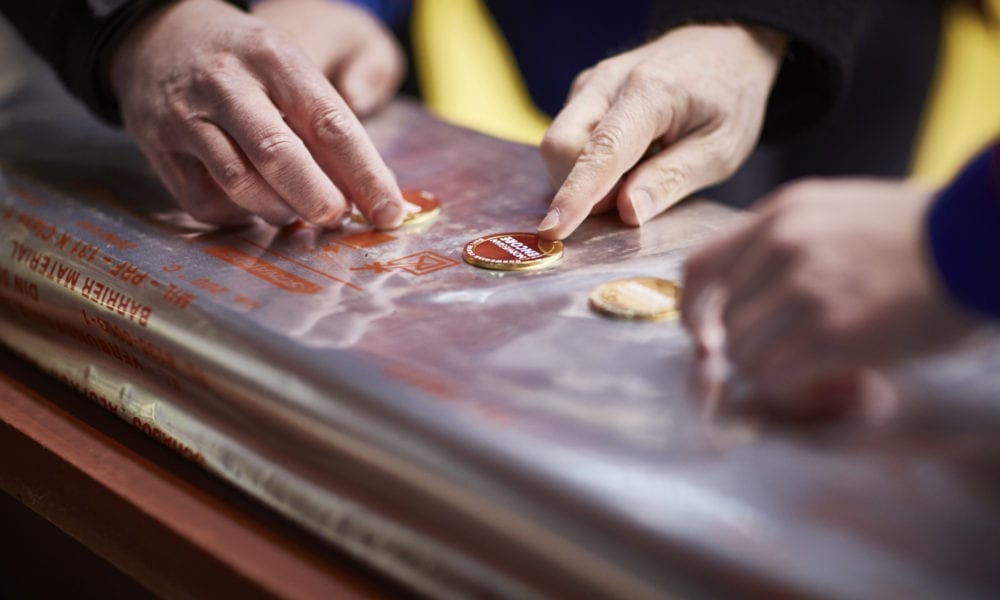 Norwegian Cruise Line had a lot to celebrate today as they not only held the keel-laying ceremony for the Norwegian Encore, but also revealed details about the ship’s features and offered up a preview of the Broadway musical to be featured onboard.

The ceremony began with the keel laying ceremony for Norwegian Encore, at which a commemorative coin was embedded between the keel blocks of the ship. Things took an unexpected turn when four performers — dressed to the nines — stormed the stage to perform the long “Land Of Lola”, one of the show-stopping numbers from the hit Broadway musical “Kinky Boots.”

The ceremony includes the embedding of a coin, a long-standing maritime tradition. (Photo courtesy of Norwegian Cruise Line)

For those not in the know, “Kinky Boots” — which features songs written by pop icon Cindy Lauper — tells the story of the unlikely partnership between a drag queen named Lola and the owner of a shoe factory that is about to go out of business. Based on the movie of the same name, the original Broadway show received a stunning 13 Tony nominations, walking away with six trophies, including one for Best Musical.

NCL’s Andy Stuart posed with members of the cast of Kinky Boots, which will make its at-sea debut on the Norwegian Encore. (Photo courtesy of NCL)

Other Shows and Features

The company also took the opportunity to reveal other details about what passengers will find on the ship when she begins sailing out of Miami in late 2019. “Choir Of Men,” which has proven extremely popular on Norwegian Escape, will join Encore’s line up, as will the interactive theater-and-cocktails show “Happy Hour Prohibition: The Musical,” which made its debut in the Social Club aboard Norwegian Bliss.

Given the success the company has found with top-deck go-kart tracks, it’s not surprising to learn that Encore will feature one as well. Clocking in at 1,150 feet, the track (which will become the largest at sea) will feature 10 turns and even extend 13 feet over the edge of the ship for the ultimate thrill. This version will also featured a covered viewing area located in the center of the track where observers will be able to help their favorite racers get a little extra speed by tagging them with a laser!

Like Joy and Bliss before her, Encore will feature a top-deck race track. (Picture courtesy of NCL)

Speaking of lasers, the ship will also borrow the laser tag concept Norwegian first introduced to their fleet on the Norwegian Bliss. This time around, teams will battle it out in the lost city of Atlantis. Additionally, there will be a large virtual reality complex known as the Galaxy Pavilion showcasing cutting edge technology and interactive gaming. And of course, it wouldn’t be a Norwegian ship without an Aqua Park.

Once completed, Norwegian Encore will weigh in at right around 170,000 gross tons and carry up to 4,000 passengers while making weekly cruises from Miami to the Caribbean. More details on the ship’s features, including restaurants, will be coming in the months ahead.