Norwegian Halloween Cruise Gets Off To A Rough Start 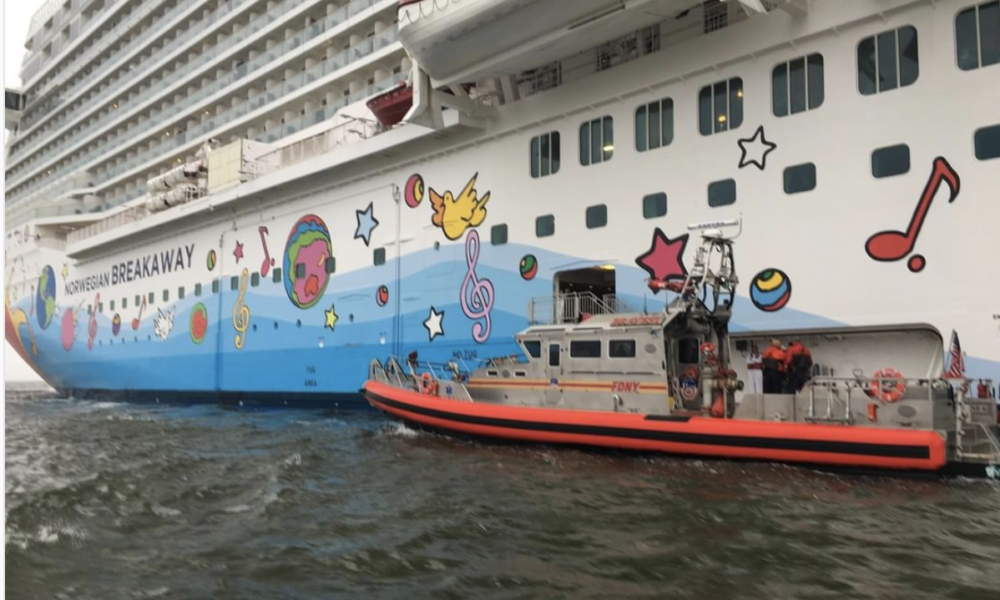 A medical emergency, a search-and-rescue mission and inclement weather created a perfect storm which caused a major delay for the Halloween-week sailing of the Norwegian Breakaway as she departed New York City for her repositioning trip to New Orleans this weekend.

It appears the problems started as Breakaway was heading back to New York City on Saturday morning. The ship received word that someone had gone overboard on a nearby cargo ship, the Northern Jaguar, while setting up a pilot ladder in turbulent seas. Breakaway assisted the Coast Guard in a search-and-rescue mission, which eventually was called off.

“Our thoughts and prayers are with the families and friends involved in this case,” said Capt. Jason Tama, commander of Coast Guard Sector New York. “The suspension of an active search-and-rescue case is a difficult decision to make. Factors such as water temperature, weather conditions, and length of time the person has been missing inform the decision.”

A Medical Emergency At Sea

Soon after, the ship had to deal with a medical evacuation. According to the United States Coast Guard, “Watchstanders at Coast Guard New York command center received notification at approximately 2:30 p.m. [that] a 76-year-old man needed medical attention aboard the 1068-foot Bahamian-flagged cruise ship Norwegian Breakaway.”

Typically, they would at this point initiate a helicopter rescue. However, because of the inclement weather, this option was quickly ruled out. Instead, they coordinated with the New York City Fire department to safely remove the passenger via a small boat.

“At approximately 5:20 p.m., the passenger was transferred from the cruise ship to an FDNY Marine vessel and taken to awaiting emergency medical services at Homeport Pier for transfer to Staten Island University Hospital.”

More Delays At The Pier

Guest waiting on word from Norwegian Breakaway at the cruise terminal. (Via Twitter/@JohnSCook)

Eventually, Breakaway was able to dock in New York City on Saturday evening to disembark guests and welcome the next set of passengers on board. But this next group’s voyage was obviously getting off to a rough start as well, with boarding delayed until late Saturday night and numerous passengers reporting that the required muster drill began at 2:30 a.m.!

Even after this, the delays continued, with the Breakaway not setting sail until nearly 7 a.m. If there was a plus side, it was that this series of unfortunate events created a rather unique opportunity: As the Breakaway was at long last sailing out of New York City that morning, she crossed paths with the just-returning Norwegian Escape. (The Escape had been expected to arrive in New York City earlier in the day, but was herself delayed thanks to all the traffic — including the Breakaway’s delayed departure — at the port.)

Eventually, Breakaway managed to sail from New York City on the repositioning cruise which will see her relocating to New Orleans.

In a statement, Norwegian Cruise Line said that as a result of the problems which beset her latest voyage, the Breakaway’s itinerary “for her New York to New Orleans sailing has been modified. Breakaway will no longer call into San Juan, Puerto Rico. She will instead sail directly to Tortola. Our team is working to assist impacted guests. We apologize for any inconvenience this unforeseen change has caused.”