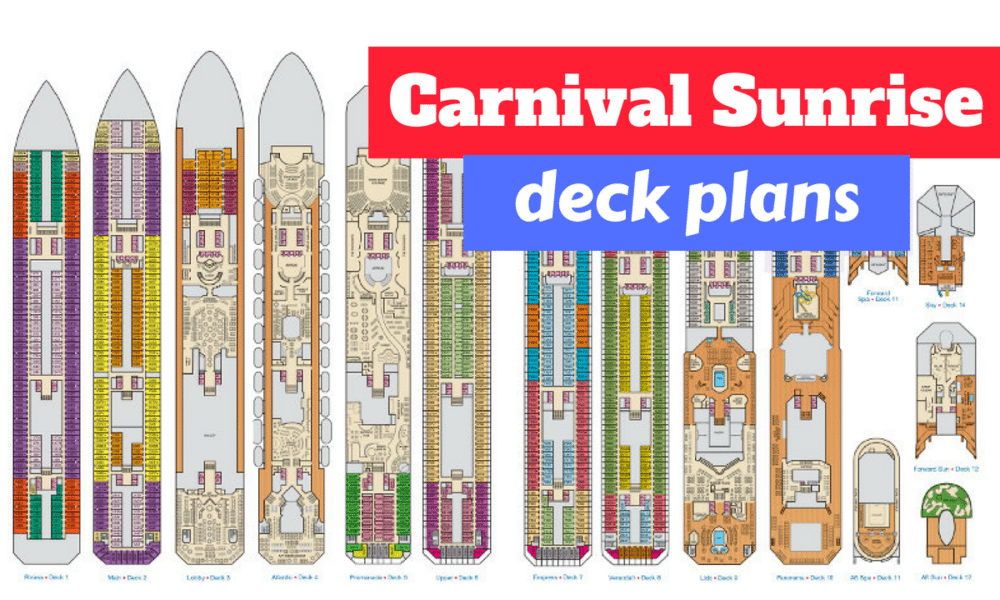 To recap, Carnival Triumph will undergo a massive, 60-day transformation before re-emerging as the Carnival Sunrise, making her sort of a sister ship to the much-loved Carnival Sunshine.

To get a better idea of what we can expect to see changed during the refurbishment, I compared the before (Triumph) and after (Sunrise) deck plans. But before we get to that, let’s review some of the basics.

Following the ship’s the initial seven-night cruise from Norfolk, Virginia, Sunrise will head to New York City where she will spend the summertime cruising to Bermuda and Canada. Then on October 29th, the ship will reposition yet again, this time to her home port of Port Everglades.

The 115 staterooms added during the refurbishment will increase the ship’s capacity by  8.3 percent. Foodies will be happy to learn that some of the most popular restaurants in the Carnival playbook are being added, including an outdoor Guy’s Pig & Anchor BBQ , Cucina del Capitano and, the Fahrenheit 555 Steakhouse. Sunrise will also get a RedFrog Pub, Serenity Adults Only area, and Bonsai Sushi Express. Other areas around the ship will be impacted, which is why we thought it’d be fun to take a look at each deck and see what’ll be changed and how.

Here’s a quick explanation of what you’re going to see below. I’ve laid the current ship, Carnival Triumph, and the upcoming ship, Carnival Sunrise, on top of each other. Triumph will always be the upper image. You will see a red line indicating what changes are going to be made, along with a description of the change next to it.

The only change I noticed here involves a stateroom’s category: They are going to convert stateroom 1405 from a 1A to a 4A category stateroom. Both 1A and 4A categories are 185 square feet. The only noticeable difference is that instead of there being an upper and lower bunk, the 4A will have two beds side by side. This will increase the capacity in the cabin to three people. The 1A cabin currently sleeps only two guests.

While all the staterooms will get refurbished — as is true throughout the ship — the categories look to be staying the same. This area is all staterooms. The major changes are still a few decks away.

Here’s where things start to get interesting, because there are going to be some fairly major changes on deck 3… especially in the front of the ship.

Currently, the Rome Main Lounge (theater) spans deck 3, 4, and 5 of the Carnival Triumph. Once the refurbishment takes place, the theater will only be accessible on deck 4 and 5. Deck 3 forward will be filled with 42 interior and porthole staterooms.

Another change on deck three involves the main dining room. At the front of this space, they’re going to add a glassed-in area for the Chef’s Table to take place in. This is similar to the set-up on Carnival Horizon and Carnival Vista, where the venue extends partially into the galley, making the entire experience a truly interactive one for guests. Comparing the two deck plans, it looks like the midship dining room may lose a couple tables on the port (left) side.

As was true before, there are no staterooms on this deck… but there are definitely some new venues.

Staring with the most forward change, the Washington Library will be transformed into Java Blue Cafe. This is where you’ll be able to get your specialty coffees and milkshakes (covered by the CHEERS! package).

Fahrenheit 555 Steakhouse is going to be added to the mid-ship area, taking some of the space away from this deck’s portion of the main dining room.

Like all the ships in this class, there is a bar with a dance floor located on mid to aft. The venue on Triumph is called The Oxford Bar. This space will be converted into the Limelight Lounge on Sunrise. It will be used for various entertainment activities during the day before it morphs into the Punchliner Comedy Club after dark.

The deck four part of the aft dining room is going to stay intact. The only real difference I’m seeing here is the placement of some tables and the balcony area looks more squared off than rounded, giving them the opportunity to put more tables in the aft dining room.

Like deck 3, deck 5 will also undergo some pretty major changes. As mentioned earlier, the Liquid Lounge (theater) is now going to span decks 4 and 5. The Warehouse Arcade will be built at the start of the promenade deck. That will reroute the flow of traffic as you make your way through deck 5. This is similar to the Carnival Sunshine, where you have to snake your way through the casino to get to the aft part of the ship, instead of the current configuration where when walking aft, the casino is on your starboard (right-hand) side.

Across from the Warehouse Arcade, the specialty shop Cherry on Top will also be expanded.

Just aft of the casino, you’ll find the new Bonsai Sushi Express and a seating area. Currently, the Vienna cafe occupies the space just off the promenade.

RedFrog Pub is one of the spots Sunshine fans love. via Carnival

The space where the disco and arcade currently sit on Triumph will be knocked down, gutted and replaced with the RedFrog Pub, the Piano Bar 88 as well as an area similar in function to Ocean Plaza, although it won’t go by that name.

Another huge project on deck 5 is going to take place just aft of the current Alchemy Bar. Here, they will be knocking out the aft theater, Venizza Bar, and the Piano Bar (remember, it’s being moved to another spot on this same deck) and install 53 staterooms. The new accommodations will be oceanview, aft balcony, and interior categories.

Decks 6, 7 and 8 appear to have no alterations being made.

Deck 9 is where a lot of the cool stuff is going to happen. At the forward part of the ship, they are adding two Captain’s Suites, as well as six oceanview cabins with floor to ceiling windows.

These cabins are definitely going to be prime real estate, because they are located at the very front of the ship, right above the navigation bridge. You’re basically seeing the same view the captain does. Plus, there is no walkway in front of you so you never need to worry about someone obstructing your view when you’re trying to enjoy the horizon.

These cabins are definitely going to book up fast. In fact, you need to consider putting a deposit on it ASAP to avoid disappointment. I’ve heard of these cabins selling out 18 months in advance on other ships.

There aren’t a huge number of changes being made as you work your way toward the back of the ship. During the Fun Ship 2.0 upgrades in 2013, the ship received Guy’s Burger Joint, BlueIguana Cantina, RedFrog Rum Bar and BlueIguana Tequila Bar. All of those places will be essentially untouched.

One thing I did notice is the aft pool. I don’t know if they’re actually going to make that a zero-entry pool or what they’re going to do, but it looks a little different.

They’re going to convert the regular rooms on deck 10 to Cloud 9 Spa staterooms, as indicated by the color change on the deck plan. These are the staterooms that grant spa access and feature special amenities.

If you compare the two deck plans, you’ll notice that there is not a deck 10 pool on Carnival Sunrise. That makes me wonder if they are going to remove the pool and hot tubs completely to put up this massive water park, or if it will simply be moved a couple decks higher to Serenity.

Outside seating in Pig and Anchor.

Making your way aft on deck 10, you’re going to see a Guy’s Pig & Anchor Smokehouse, which is the outdoor barbecue restaurant. If you’re familiar with where the funnel is, this venue will be pretty much right underneath it on deck 10.

Making your way back toward the pool, I do notice on Carnival Triumph, the deck plan currently says there’s a sliding sky dome back there where they could enclose the area during inclement weather.  That dome is not being shown on the plans for Carnival Sunrise.

Deck 11 forward adds seven more Cloud 9 Spa cabins. You will also see they’re changing the name from ‘Spa Carnival’ to the ‘Cloud 9 Spa’ and adding a thermal suite, which have proven very popular on other ships.

One thing to note in the fitness area: Currently on Triumph, the men and women both access the fitness center from their respective areas. If this is anything like Carnival Sunshine, there will only be one entrance into the fitness center and the locker rooms and saunas will be on either side of the entrance.

Deck 11 aft will see the removal of the skylight, which will be replaced with the SportsSquare. This area will include a new basketball court, ropes course and a variety of outdoor fitness equipment and gaming options.

Deck 12 will see the relocation of the golf course, which will be replaced with the adults-only Serenity area… which seems to feature a pool. Will this replace the pool that has been removed from beneath the water slides on deck 10?

Club O2 will be a bit smaller on Sunrise, and they are going to build out a Camp Ocean on deck 10 as well. You’ll also see the addition of another elevator on deck 12. Currently, Triumph only has one. That will increase to two.

The . miniature golf course is being relocated to underneath the funnel.

Finally, we have the deck 14. As it exists currently, it is nothing but a slide entrance and a big open area.

Once the dry dock is completed, that big open space will be replaced with the second level of Serenity. When I first saw this, I couldn’t help but wonder how that would work, with the entrance to the kid-friendly slides being in the same general areas as the adults-only Serenity. But looking closely, you’ll see a partition there, which should make sure the two groups stay separated.

So now that we’ve given you a closer look at the changes being made, what do you think of the new-and-improved Carnival Sunrise?