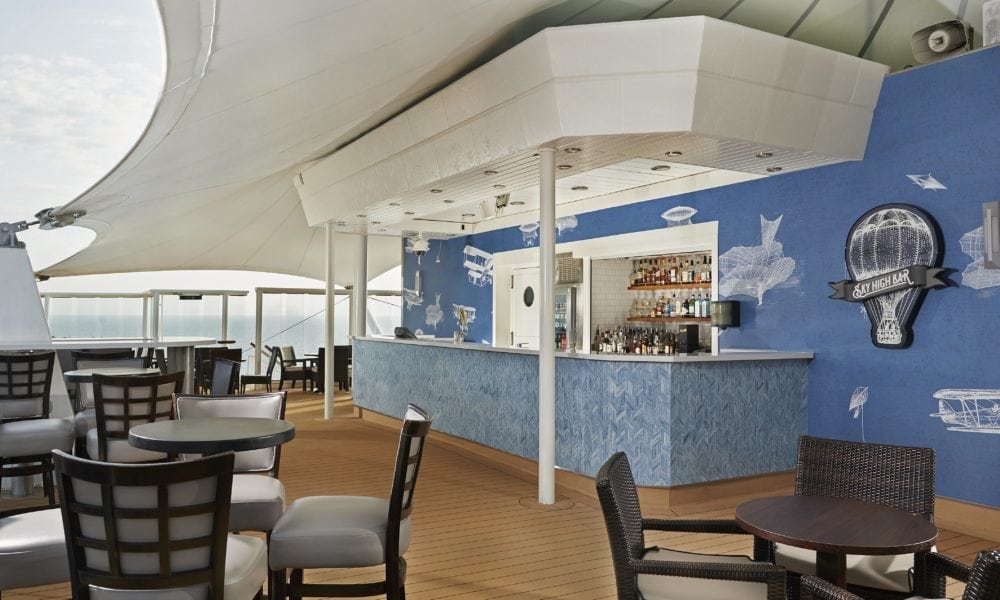 In big news from Norwegian Cruise Line, three of their ships — including the relatively new Breakaway — have completed extensive makeovers as the final stage of the company’s Norwegian Edge program. The other ships which underwent refurbishment during recent drydocks were the Norwegian Sun and the Norwegian Star. This comes hot on the heels of news that Carnival Cruise Line’s Triumph will soon undergo a massive transformation and emerge as the Carnival Sunrise. Ready for a look at what changes Norwegian made to their ships… and pictures? Then read on!

Breakaway Gets A New Rock Bar

Built in 2013, the Breakaway’s renovation took place over a two-week period in Brest, France. Perhaps the biggest change was the installation of Syd Norman’s Pour House, which replaces the Fat Cats Jazz & Blues Club. The new club is modeled after classic rock ‘n’ roll bars like CBGB’s, the Rainbow and the Fillmore. Featuring vintage decor and diner-style seating, the hot spot will play host to the cast of Rock Of Ages, who three nights a week will treat guests to specialty cocktails named after rock songs. And five nights a week, a five-piece band will play classic rock tunes.

Elsewhere on the Breakaway, the Bliss Ultra Lounge will get new furniture, the carpeting will be replaced in all of the staterooms (including suites) as well as in the lobbies, elevators and on the staircases. Finally, the gift shop will get a complete makeover as well.

The Breakaway’s nightclub got a nice facelift.

The Norwegian Sun Gets An Overhaul

After a three-week bow-to-stern makeover in Victoria, British Columbia, the Norwegian Sun emerges as basically an entirely new ship thanks to an upgrading of everything from staterooms to the public spaces. Best of all, she’ll have three new venues. First, in the place of Las Ramblas Bar & Restaurant will come Los Lobos Cantina, decked out with leather banquettes, dark wood tables and ranchero-style design accents.

The onboard nightclub, formerly known as Dazzles, now becomes (as on other Norwegian ships) the Bliss Ultra Lounge, with a whole new look sure to — for lack of a better word — dazzle guests who come here to start their evening with a cocktail and finish it by dancing until dawn. The updated look will offer lots of plush, comfy furniture, chandeliers and, of course, a dance floor.

The third venue getting an upgrade is the Observation Lounge, which will now be known as the Spinnaker Lounge. (This is interesting in that Spinnaker has long been a feature on some of Norwegian’s older ships, while the Observation Lounge is a big selling point on newer ships such as Norwegian Bliss and, after her upcoming renovation, the Norwegian Joy.) The Spinnaker Lounge will have a relaxing, natural color palette (think lots of blues and tans) and a stone-top bar, as well as new couches.

The Spinnaker lounge is a great venue to relax in, day or night.

The ship’s staterooms will get not only new carpets and some new furniture, but — important to many cruisers in today’s world — a tech upgrade, including smart TV’s and USB ports. Other areas around the ship — including Cagney’s, La Cicina, the Mandara Spa and more — will also be getting spiffed up.

The Sun’s staterooms have a bright, airy feel.

Norwegian Star Gets An Adults-Only Area!

Perhaps the biggest news to come out of the three-week refurbishment of the Norwegian Star is that for the first time ever, that ship will now feature Spice H20, the popular adults-only area. It will offer a private pool, hot tubs, full bar and — of course — killer views of the ocean. During the day, it’s the most relaxing place to chill… while at night, it morphs into an open-air lounge playing host to themed dance parties, DJ’s and more.

Another big change for the Star is the arrival of Sky High Bar, which will replace the Bier Garten. With a new design, it’s a great place to hang out with 120 of your closest friends and enjoy the best views to be found anywhere on the ship.

The Spinnaker Lounge has been replaced by the Bliss Ultra Lounge, which will now feature an entirely redesigned space with comfy loungers, an upgraded bar and everything you need to get your late-night party on.

Ready to get your grove on? Head to Bliss!

Elsewhere, all of the staterooms and suites were outfitted with those all-important USB ports, new carpeting and more. And the three garden villas — which take lux to the next level thanks to private deck areas and room for up to seven guests — also got a new, airy look. Elsewhere, spaces such as the Atrium Bar, the Garden Cafe and the main dining rooms were given an update, and a VIP section was added to the casino.

Are you excited about the updates NCL has made to these ships?