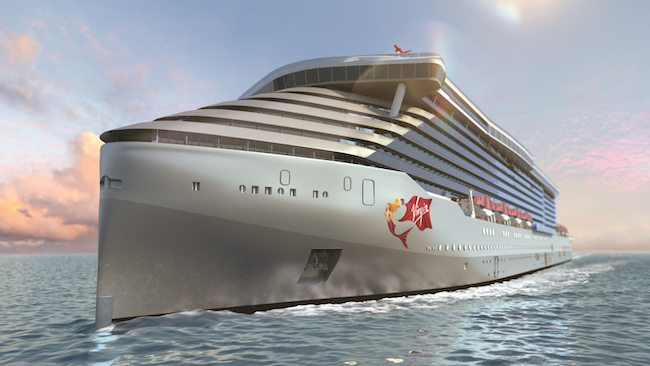 Although the first Virgin Voyages ship isn’t set to launch until 2020, cruisers are anxiously gobbling up any tidbit of information they can get about the new line. And truth be told, that’s not much.

But this week, Virgin released a few photos and provided an update on the construction process… and the name of the ship may or may not have accidentally been leaked.

What We Know About Virgin Voyages

The currently-being-constructed ship is the first of a proposed three which will introduce Virgin Voyages. When the ship makes her debut, she’ll begin sailing out of Miami. Bucking the current bigger-is-better trend, Virgin’s ships will be midsize, with about 1,400 staterooms carrying 2,800 passengers. Oh, and lest we forget, all of those passengers will be over 18, because Virgin Voyages will be an adults-only ship.

Playing on the British term “your ladyship,” the vessels are referred to as lady ships, while passengers will be referred to as “sailors.” The brand’s website promises that sailors will find the ship packed with “sleek, yacht-like spaces, classic nautical accents, inventive surprises and nods to Virgin’s British heritage.”

Spring 2015: Sir Richard Branson and Virgin Cruises CEO Tom McAlpin announced their plans to enter the cruise business and signed a letter of intent with Fincantieri shipyard in Italy.

Fall 2016: After the passage of enough time that some wondered if perhaps the plans would never come to fruition,  Branson announced in October of 2016 that Virgin had actually contracted with Fincantieri for the construction of three eco-friendly ships.

October 2017: Construction on the first ship officially began, with Virgin executives and media members attending the official steel cutting at the shipyard. In true Branson style, Boy George was the guest DJ at the event. At this time, guests were officially able to begin putting down deposits on the first sailings.

May 2018: At last, we began to get a glimpse into what the Virgin Voyages aesthetic would be, as an event was held during which gorgeous renderings of several public spaces were revealed. Among the spaces touted during the event were a top-deck VIP area, a lounge area called The Dock, and an upscale Mexican restaurant.

This rendering shows The Dock, designed by Roman & Williams, and described as “an outdoor lifestyle space with a focus on comfort, social life and an appreciation for the ship’s gorgeous views.” Rendering courtesy of Virgin Voyages

July 2018: The company’s official Twitter account sent out four construction photos of the upcoming unnamed cruise ship. And while the hull in the pictures below gives no indication as to the name of the ship, several photos made the rounds which seemed to show the same hull but with the words “Scarlet Lady” faintly visible. Rumors have circulated for quite some time that this would be the name of the first ship, and it is even listed under that name on the Virgin Voyages Wikipedia page. So while it is not yet official, the evidence is certainly mounting that Scarlet Lady will be the line’s flagship vessel.

A look at the midsection of the unnamed ship. Photo: Virgin Voyages Twitter

The ship that is currently under construction. Photo: Virgin Voyages Twitter

The iconic Virgin logo welded on the side of the cruise ship. Photo: Virgin Voyages Twitter

Are you excited about Virgin Voyages? Do you plan on booking a stateroom on the ship?