Over the weekend, the vessel left Chantiers de l’Atlantique shipyard in France with a course set towards her new winter homeport of Port Everglades.

According to MarineTraffic.com, the ship is scheduled to arrive off the coast of the Bahamas on Monday, October 12.

Construction was supposed to be completed back in March, until the pandemic impacted both the ship’s delivery date and christening.

Like sister-ship Celebrity Edge that was launched in 2018, Apex will also include features such as the infinite veranda balcony staterooms and the Eden entertainment and dining venue. Most notably and recognizable is the Magic Carpet, a platform suspended along the starboard side of the ship that moves vertically from deck to deck. 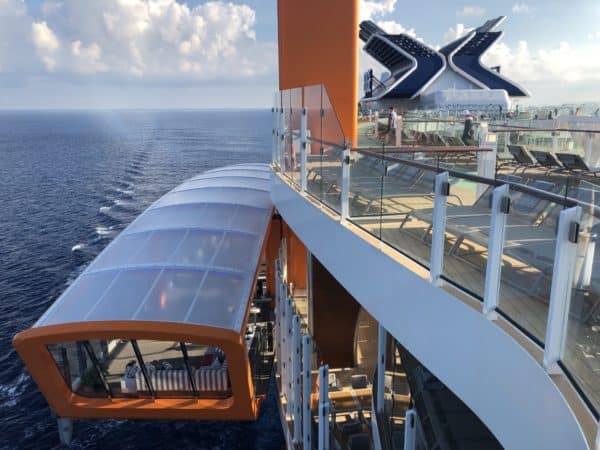 View of the Magic Carpet from Celebrity Edge.

Apex is scheduled to sail seven- and 14-night cruises through the Eastern and Western Caribbean through the winter of 2021. In spring, the vessel will reposition to Barcelona for a season of Mediterranean cruises.

The christening is expected to be in Port Everglades once cruising resumes.

With the cruise industry still shut down in North America, there is a chance the ship will have to anchor offshore until the U.S. Centers for Disease Control lifts the no-sail order. The current no sail order, unless extended, is set to expire on Saturday, October 31.

Sometime in October, cruise industry leaders, along with White House officials and the CDC are expected to discuss the new Healthy Sail Plan and Mandatory Core Elements, both submitted by the cruise industry in late September.

Currently, dozens of cruise ships are off the east coast of the United States and Bahamas waiting for cruising’s green flag to drop.

Author: adayincozumel
Filed Under: News
Best Cruise Line Loyalty Programs
The Truth and How To Get Them