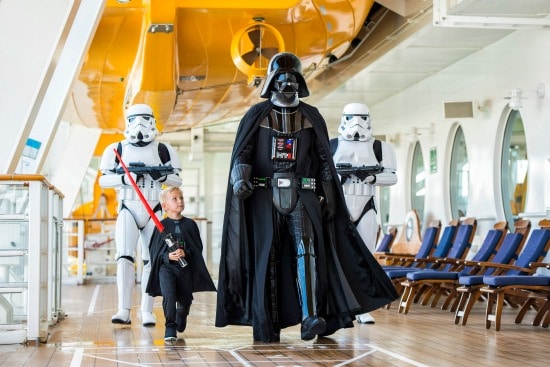 Taking things from the dark side to the blue side, young Padawans and their Jedi moms and dads can get excited about next year’s Disney Cruise Line offerings. The line, best known for their immersive and family-friendly activities, will be bringing back two of their most popular themed-cruise experiences — Star Wars Day at Sea and Marvel Day at Sea.

Families looking to journey into a “galaxy far, far away” will find nine sailings aboard the Disney Fantasy which feature the Star Wars Day at Sea — departing from Port Canaveral on seven-night Caribbean sailings from January to March, and traveling to destinations such as:

Each themed-sea-day will feature a plethora of popular characters, live shows, special activities, and unique food, drink, and merchandise offerings. The day also ends with a “Summon the Force” deck party featuring a fireworks show of “galactic proportions.”

Lovers of the Marvel Universe can also take part in the action, with action-packed itineraries aboard the Disney Magic out Port Miami. Much like its Star Wars counterpart, Marvel Day a Sea will also be featured on only nine cruises from January through March in 2020, sailing to popular Caribbean ports including:

“Avengers, assemble!” will be the theme of the day as supernatural characters like Iron Man, Captain Marvel, and Groot will be on board for unforgettable meet-and-greets. Families can also expect a day full of Marvel-themed live shows and activities — including a stunt show featuring Star-Lord, Gamora, and Dr. Strange.

If you had to choose between the Star Wars or Marvel Day at Sea, which would your family go for?