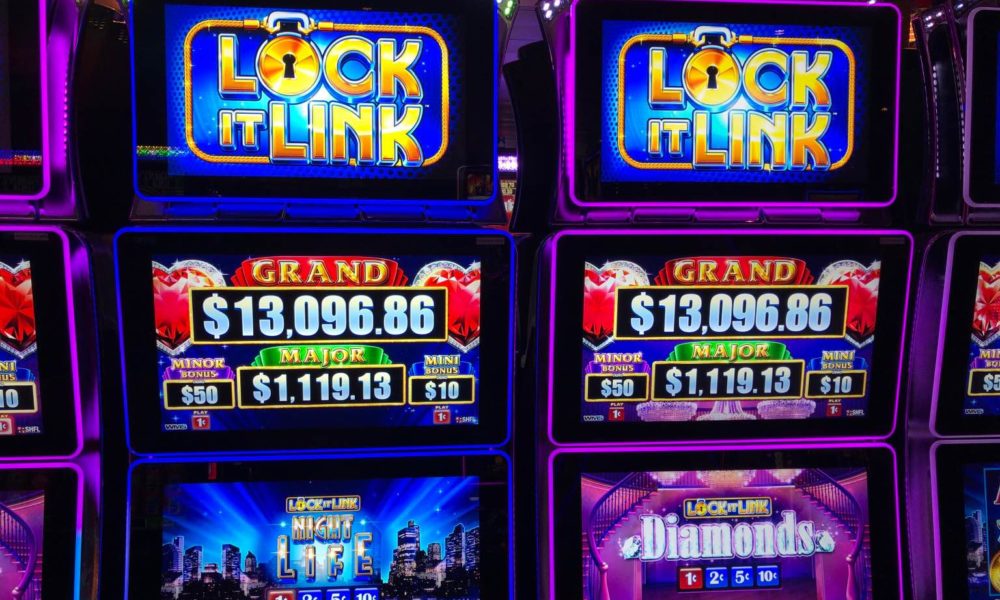 For many of us, cruising and gambling go together like Jennifer Aniston and pregnancy rumors. While our friends and family are climbing rock walls or playing trivia, we’re deciding whether to let it ride and willingly handing cash over to a one-armed bandit. And while sitting at the poker table or Quick Hits slot machine, we inevitably wind up bonding with the people around us. About what do we talk? Well, these tend to be the most popular topics.

The only thing better than scoring a major jackpot is being able to talk about it with fellow gamblers. You can bring it up with non-gamblers, but they’re reaction will always be the same: “And how much did you have to spend to win that?” Because every party has a pooper, and when it comes to tales of casino glory, that pooper is your non-gambling travelmate.

One of the things people love about the Lock It Link games? Big jackpots can be won without playing the maximum bet.

2. The One That Got Away

Remember how your grandma used to say, the moment someone yelled Bingo, “I only needed one more number!” That same conversation takes place a hundred times a night in every casino on every ship. “If I’d gotten the Ace of Spades instead of the Queen of Hearts, I’d have won $10,000!” (And grandma will be happy to know that elsewhere on the ship, people are also cursing that B-9, rather than B-10, was called.)

Generally speaking, gamblers tend to be happy even when the person who wins isn’t them. We like knowing that the casino is paying. So for most of us, when we talk about the fact that someone won a jackpot on the machine next to us, our voices our tinged with a bit of regret, but not actual bitterness. Sure, we’d love for it to have been us, but the next best thing to being able to say we won is being able to say, “Oh, yeah, someone hit it big on the machine next to me last night.”

4. The One Who Didn’t Deserve It

Sometimes, we gamblers can be… I’m just going to say it: judgmental. We don’t like to see jerks win. There’s a fine line between having fun with your posse at the craps table and being obnoxious. We’re also not big on people who are rude to the casino staff, whether it’s the dealers at the table or the servers who keep us hydrated. Be nasty to them, and we’ll definitely be talking about you.

5.  The One Who Took Their Cards

You’re having a great night at the table, winning every few hands… and then, a new player joins the game. And while the newbie is perfectly pleasant, the cards are suddenly turning against you. You don’t want to blame them but, well, something has changed and that something is them. Blaming them isn’t logical, but then again, neither is going “all in” because your gut tells you the other guy is bluffing.

A new player or two entering the game can throw some players completely off their game.

Real gamblers never, ever forget to put their player’s club card into a slot machine, because we are always pursuing the next level in the rewards program. We’re out to earn the “free” room, some on-board credit, the card that affords us free drinks while gambling. (When I recently considered paying to upgrade from the room I’d been comped to a higher category, a friend quipped, “Why bother? You’re going to spend most of your time in the casino!”) There are whole message boards and Facebook pages devoted to discussions about things like theoretical versus actual spend, how much money has to be cycled through a machine to earn points and of course…

While gambling is always a metaphorical roll of the dice, that’s literally true when playing craps.

6.  The Comps They Formerly Earned

Those who’ve been cruising for years often lament the things they miss. Lobster night, midnight dessert buffets, truly formal formal nights. Gamblers are the same, except they lament changes made to the various rewards programs. And while loyalty has its rewards, gamblers are not afraid to let their eyes wander to other cruise lines if they feel they aren’t being given the respect (and comps) they deserve.

What do you talk about while feeding the one-armed bandit or waiting for that perfect hand of cards to be dealt?