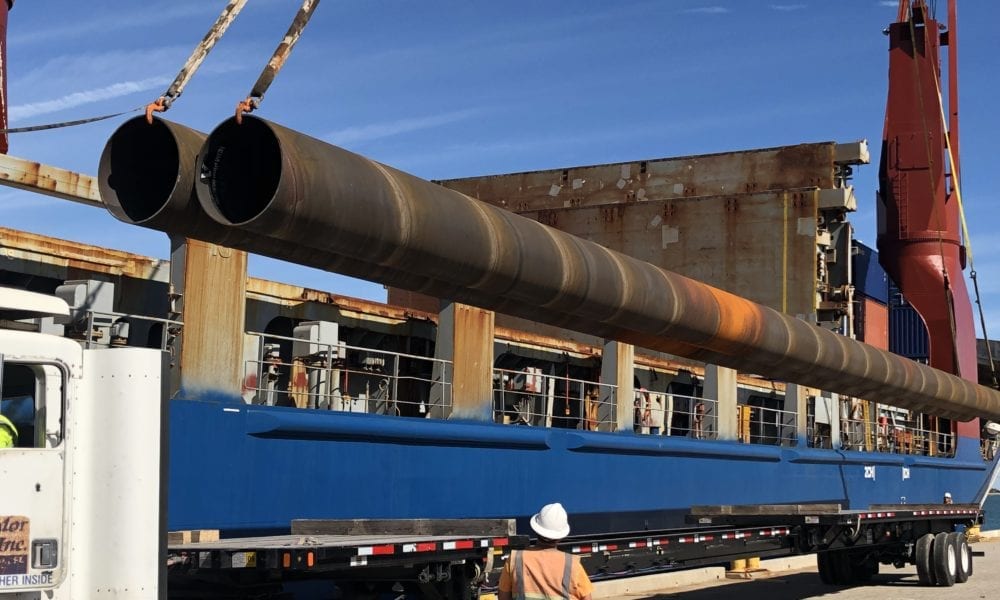 Waterside construction at Port Canaveral’s new Terminal 3 is underway, and a new 1,309-foot-long berth is going to start taking shape as the first steel has arrived for the bulkhead wall.

Intermarine LLC’s Ocean Globe vessel arrived at the port this week to drop off 261 steel pipes ranging from 110.5 to 126 feet long. The 3 foot diameter pipe piles will be part of an A-frame structure that will anchor to the waterfront bulkhead wall. Construction of the new berth began in September, starting with the demolition of existing pier structures at the site and installation of erosion barriers.

In a first for Port Canaveral, a lightweight aggregate will be used in construction as backfill to reduce long-term settlement of the berth. It reduces load on the bulkhead wall, allowing a reduction in the size of the steel. The aggregate is manufactured from various clays produced by a rotary kiln process.

The completed CT-3 terminal and its related structures and roadway improvements will be the port’s largest single capital project in its 65 year history. The $150 million project will be finished in time for the arrival of Carnival’s yet-to-be-named 180,000-ton “XL Class” vessel in June 2020.

Two passenger boarding bridges for the new terminal are currently in the design/build process and terminal and parking garage construction is expected to start in January 2019 and finish in April 2020. This new terminal is being built on the site of the old Cruise Terminal 3 and will feature a futuristic design inspired by the nearby Kennedy Space Center.

Carnival’s largest vessel ever will hold up to 6,500 guests and be the first North America-based cruise ship powered by liquefied natural gas, the world’s cleanest burning fossil fuel.