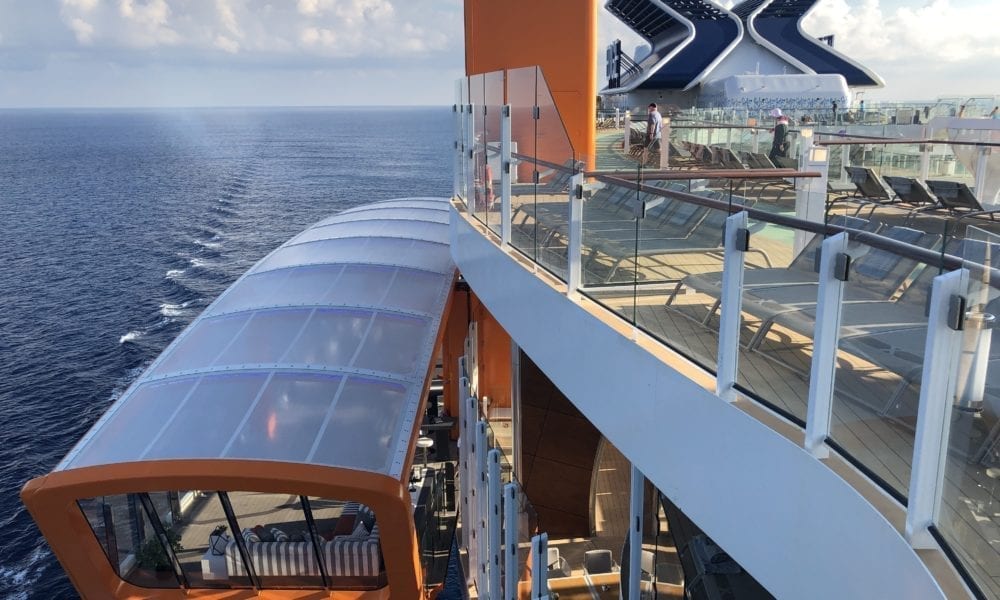 The phrase “game-changer” is probably used too often, and yet it’s the only way to describe the Celebrity Edge. The ship, rolled out by Celebrity Cruises in late November, offers innovations in terms of technology, staterooms, entertainment and more.

There’s a reason the buzz surrounding this ship has been so loud: It earns it… and here’s just seven ways in which I think Celebrity Edge will be the bar against which future ships are measured.

It’s not easy to re-invent the balcony, but Celebrity managed to do so by blurring the line between indoor and outdoor space. Actually, it would be more accurate to say that with the touch of a button, these cabins literally eradicate that line, creating an entirely new type of space which connects occupants to the ocean in a way literally never seen before at sea.

It’s almost impossible to understate how transformative these staterooms are likely to prove to not only this ship, but the industry as a whole. (Special kudos to Celebrity for creating solo Infinite Veranda staterooms which are slightly smaller than the double-occupancy version, but also significantly cheaper.)

Interestingly, this 90,000 ton moveable platform has a fair amount in common with the Infinite Verandas. Both extend the space to which they’re attached, and both bring passengers closer to the ocean. But what the verandas do for staterooms, the Magic Carpet does for multiple spaces.

Aboard the Magic Carpet on Celebrity Edge.

To call this an elevator would be a misnomer (because it doesn’t actually move while guests are on the platform) and a disservice (because it is so much more). Whether serving as an extension of the restaurant Raw on 5 or helping to make the tendering process easier, the Magic Carpet is far more than a gimmick. In fact, it’s almost a challenge to ship designers, insisting that they think not only outside the box, but over the edge of the ship itself.

How do you even begin to describe something as unique as Eden… especially what it holds in store for guests after dark? During the day, the space is interesting enough, thanks to its comfy seating, bar, nooks and crannies. But it’s at night that the space completely transforms in ways that bring to mind the old saying, “fortune favors the bold.”

Because I have absolutely no doubt that some will find the experience — which includes interacting with Eden’s “residents” and performances that are sometimes unconventional — outside their comfort zone. The experience that unfolds around you is anything but traditional, but also absolutely unforgettable.

The show theater on Celebrity Edge.

Cruise ship theaters tend to be very box-like and fall under the heading, “If you’ve seen one, you’ve seen them all.” But the one on Celebrity Edge is more showroom than theater. The stage itself juts into the audience, helping to assure — along with the lack of support columns — that site lines are unobstructed.

The design also allows the audience to feel more connected to the performers. 154 speakers allow the sound to envelop the audience like a cloud settling over the top of a mountain. If I didn’t know better, I’d swear the entire theater was designed for people like me, who prefer to sit in the back row in order to beat a hasty retreat once the show is over. Usually, that means less-than-ideal sound and visuals, but that is definitely not the case here.

For a while now, every major cruise line has been designing apps which allow passengers to order food, check their onboard spending accounts and make dinner reservations.  With Edge, Celebrity took things one — or maybe 10 — step beyond by creating an app which allows passengers to control nearly every aspect of their stateroom. Without getting out of bed, you can change the temperature in the room or close the blackout curtain. You can even use your phone to open the door to your stateroom.

As is so often the case — and probably ideal — guests won’t actually notice most of the changes implemented to make the ship as environmentally friendly as possible. For example, as long as you can sip your mudslide through a straw, you likely won’t care that it’s paper as opposed to plastic.

And while the elimination of single-use plastics is something nearly every cruise line is doing, Edge has another innovative feature you’re definitely not going to notice: the friction-reducing “bubble” technology which allows the ship to glide through the ocean at a higher speed while expending less fuel. Since the ocean is the thing we’re all there to enjoy, it’s nice knowing that they’re working so hard to help preserve it.

Right now, you’re rolling your eyes and saying, “Seriously?” But… seriously. Even the track on which passengers can jog or run is completely innovative as far as cruise-ship design goes. Yes, almost every ship now features some form of track on which to walk or run. And like you’ll find at any high school (or, for that matter, Olympic-level facility), those tracks are a flat loop.

On Celebrity Edge, you’ll instead find a track that spans two decks — meaning you actually go up and down slopes — and the traditional loop takes some unexpected twists and turns. As anyone who has ever watched the calorie-counter on a treadmill can tell you, the moment you throw an incline into your workout, you’re burning more calories.