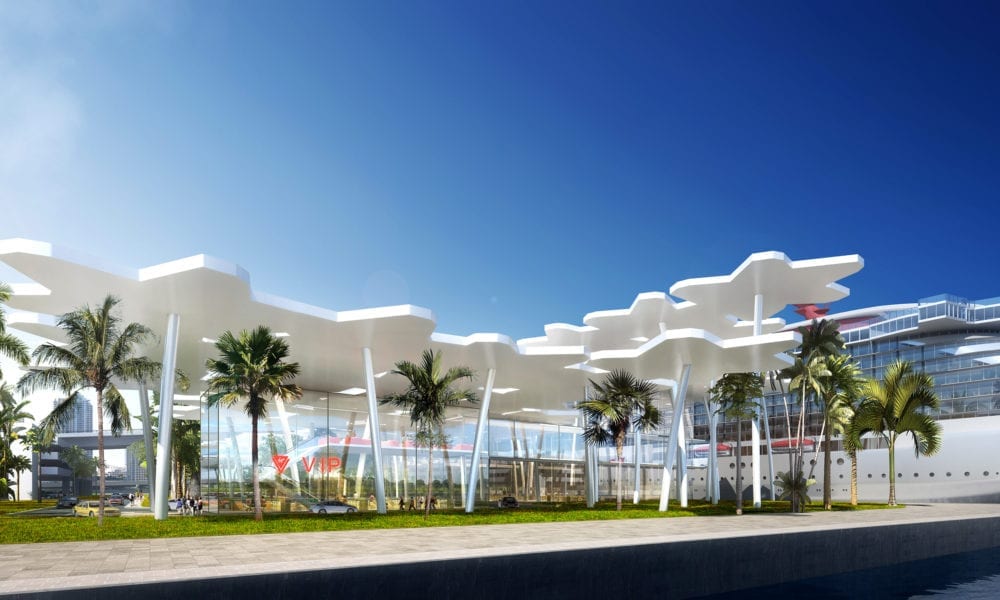 In their latest ship tease, Virgin Voyages revealed not only that their Scarlet Lady cruise ship will get a brand new terminal in Miami, but when would-be passengers will be able to book their staterooms! During the press conference, the company also revealed that Scarlet’s as-yet-unnamed sister ship is expected to begin sailing out of the new terminal in the fall of 2021.

A New Terminal For Miami

“Miami is an incredible city, and one of my favorite places to work and play” said Virgin Group Founder Sir Richard Branson in announcing the new terminal. Added Virgin Voyages’ president and CEO Tom McAlpin, “With our fleet now growing to four ships, we’re humbled and thankful to soon have a gorgeous new terminal overlooking the Miami skyline, an incredible view that will set the state for the alluring journey that we will take our sailors on!”

The new terminal promises to be as cutting edge as the ships who will call her home. (Rendering courtesy of Virgin Voyages)

At 100,000 square feet, the terminal takes its inspiration, appropriately enough, from Florida’s palm groves. The design, from Miami-based Arquitectonica, features a rooftop resembling one of those groves, with pockets which will allow natural light to flood the building during the daytime while at night, it will shine bright as the city’s skyline while featuring the company’s iconic logo. Given Mother Nature’s tendency to occasionally batter the area, the building will be storm proof while featuring lush landscaping that will give it a plaza-like feel. VIPs will have a designated drop-off zone, as will those taking advantage of ride-sharing programs. Ultimately, the facility is designed to provide the most seamless ship-to-shore transition possible.

At night, the new terminal will light up the sky. (Rendering courtesy of Virgin Voyages)

When You Can Book A Stateroom

Meanwhile, Virgin will be giving sailors (as they call their passengers) a very special Valentine’s Day present, as that’s when bookings will open to the general public. (Those who took advantage of the opportunity to put down pre-sale deposits will have the opportunity to book beginning on February 5.) Although they currently have four ships on order, there’s no word yet as to where the next two ships might sail out of. As of now, the Scarlet Lady is set to do Caribbean voyages out of her new terminal throughout 2021.

Already, the Scarlet Lady is shaking up the cruise industry, with each new “ship tease” offering up enticing details, including that she will have an on-board tattoo parlor while eschewing a buffet to focus on unique dining venues aimed at the 18-and-over-only crowd she’ll cater to.