How Carnival Celebrates Holidays Throughout the Year 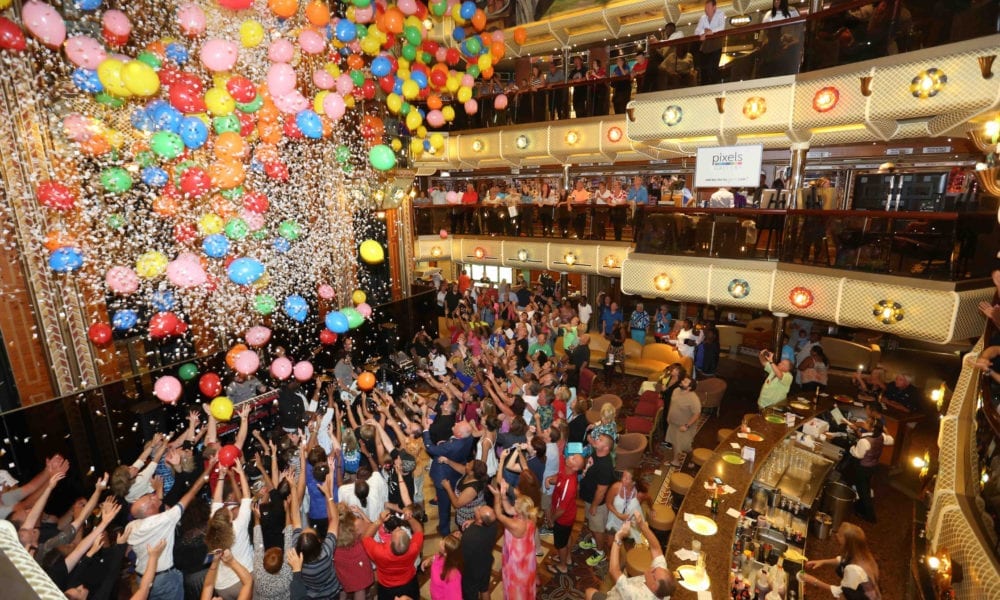 Are you going on a Carnival cruise over a holiday, and wondering what they might do onboard to celebrate? You’re in luck! We have a full list of the holidays and events that are celebrated on the Carnival ships, as well as some of the fun themed festivities that will take place for them.

March Madness isn’t actually a holiday, although lots of people celebrate like it’s the best holiday of the year! During March and April, Carnival offers a March Madness trivia and prediction challenge and games will be shown in select bar locations. The Final Four and Championship Game might also be shown on the jumbo pool deck screen. Be sure to wear your favorite team’s jerseys and colors!

Activities on March 17 can include a St. Quackie’s Day Duck Hunt and St. Paddy’s Trivia Power Hour, an Irish-style pub crawl, specialty drinks and cuisine at dinner, and the chance to see lots of other cruisers wearing green head to toe!

Activities for guests of all ages, including some for families and kids, take place on Easter Sunday. If a clergyman wants to perform a Sunday service, they can request through Carnival to do so on a volunteer basis. Other activities include a Golden Egg Hunt, $750 Easter Egg-Stravaganza Bingo, and themed youth activities.

A limited Passover menu is offered onboard all ships during the Passover holiday, which is observed for eight days. As with Easter, a clergyman of any faith can request to perform a service on a volunteer basis.

Carnival celebrates Earth Day with themed trivia, an Earth Day talk and presentation, and activities in the kid’s clubs associated with caring for the planet.

Spanish for “fifth of May,” this date commemorates the Mexican army’s victory over French forces. Festivities include a Mariachi Duck Hunt, Cinco de Mayo trivia, a themed deck party, Mexican-themed movies, and themed activities in the youth clubs.

Here’s another event that has nothing to do with the holidays, but is celebrated by many onboard nonetheless! Themed activities in June include NBA Basketball Trivia and Champion Squares and a Prediction Challenge. Finals games will also be shown around the ship.

World Oceans Day is June 8, and on this special day people around the world celebrate and honor the ocean. Festivities include an expert talk and cake party, a fish hunt, ocean trivia, coffee shop puzzles, and themed programming in the youth clubs.

This is the time to show love and appreciation for the dads onboard! Carnival celebrates with a Dad/Daughter, Dad/Son look-a-like contest, daddy wrapping, dress mom like dad, and balloon stuffing. There’s also a message to dad recording, Father’s Day craft session, and themed crafting and games in the kid’s clubs.

To celebrate the USA’s independence, Carnival decorates the ship with even more red, white, and blue (those are Carnival’s colors, too!) and holds a daytime lido deck party, 4th of July trivia, line dancing, American-themed movies on the lido deck, a family party and scavenger hunt, drink specials, and an all-American buffet.

As part of Carnival’s partnership with Build-A-Bear Workshop, the line celebrates National Teddy Bear Day with a Build-a-Bear Workshop at Sea Party, themed activities in the youth program, and a Cruise Director Welcome, featuring the heart ceremony for kids’ furry Build-A-Bear friends.

September 19 is Talk Like a Pirate Day, which means lots of swashbuckling fun on Carnival. Activities include a duck hunt, themed trivia and bingo, a pirate deck party with games, pirate-themed movies on the Lido Deck, and pirate crafts in the kid’s clubs. Passengers are also encouraged to dress up in pirate garb for the occasion.

During Rosh Hashanah at the end of September, there are no formal activities planned but if a clergyman of any faith wants to perform a religious service, they may apply to do so on a volunteer basis.

There are no formal activities planned for Yom Kippur, but if a clergyman of any faith wishes to perform a service, they may apply to do so on a volunteer basis.

The baseball World Series may not be a holiday, but to many Americans it might as well be! Activities during the World Series include themed trivia, a prediction challenge, and finals games playing on various TV’s around the ship.

During Hanukkah, guests can gather together for the lighting of the menorah and a special service in the atrium in honor of the Jewish celebration of miracles. The service also includes prayers, songs, and Latkes, sour cream, applesauce, and Manischewitz wine. Kid’s clubs offer Hanukkah themed crafts, games, and books. If a clergyman wants to perform a religious service, they may apply to do so.

Though Christmas is on December 25, Christmas is celebrated all December leading up to the holiday on Carnival. The ships are decked out in cheerful decorations, including multiple Christmas trees across the entire ship. Activities include an ugly sweater contest, Christmas carol sing-a-long, writing letters to Santa, and an on-stage Holiday Show. Guests can also find an elaborate gingerbread village or two onboard, and The Grinch himself joins passengers at sea, making surprise appearances throughout the cruise.

The Christmas tree decorated in the Vista atrium.

On December 31, the ship is abuzz with New Year’s festivities. Leading up to the clock striking midnight, Carnival hosts a New Year’s Eve Party and Balloon Drop indoors. Then, passengers head up to the Lido Deck for the New Year’s Eve Bash, featuring live music with the house band and a countdown to midnight with the cruise director. Kid’s clubs host New Year’s Eve parties of their own within their own spaces. Once it’s officially January 1, adults 18 and older can join in at the New Year’s Eve After Party, lasting into the wee hours of the morning in the ship’s night club.

Author: adayincozumel
Filed Under: News
What Crusiers Are Grateful For This Thanksgiving
Pride of America Review 2018 + Cruise News