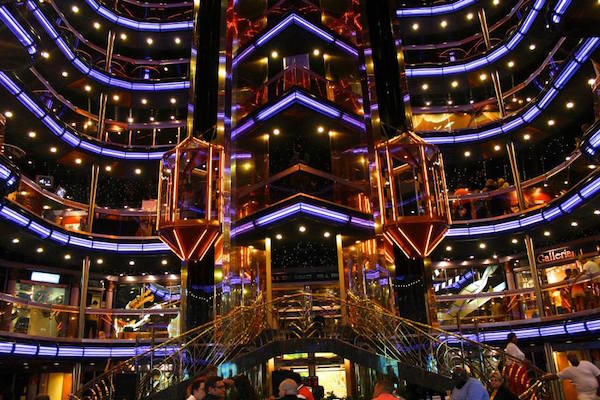 I just returned from a cruise where I stayed on deck one – the very bottom. Sure, the first day I was all about taking the stairs up to deck nine for food or deck five for drinks, but after 48 hours, my legs were killing me! That’s when I started taking the elevator. It was then when I noticed a lot of people have no clue about elevator etiquette.

Consider these seven golden rules before jumping in the elevator on your next cruise.

Before barging into the elevator, make sure it’s empty first. Stand to the side when the doors open to let everyone get out, and then walk in. Don’t charge the elevator as soon as the doors open – you could come face to face with a very angry person.

Before stepping foot in the elevator make sure you know where you’re going. All elevator banks have a map of the ship as a reference, but If that’s not enough most elevators have signage inside of them as well.

If your destination is one or two flights up, take the stairs. Unless you’re physically unable to use the stairs, please use them! You’re on a cruise and should be walking off all those calories.

If you’re going to the gym, take the stairs!

If you’re standing towards the back of the elevator and approaching your floor, say something polite like, “I’m next” or “let me squeeze by you.” This will let people know to make room for you to get off where you need to.

Make sure the little ones keep their hands to themselves while in the elevator and not on the buttons.

On a recent cruise, I was staying on the Rivera deck (deck one) and was going up to deck nine. A little kid pushed every button from deck one to 14. It lit the panel up like a Christmas tree. His parents laughed while I died a little inside.

You know the golden rule, now follow it. If someone is sprinting across the atrium to catch the elevator or isn’t paying attention and they perk up, hold the door so it doesn’t close in their face – don’t push the close door button on them. You’ll probably see them again.

When you get into the elevator, turn around and face the front, not the people behind you. No one wants to be friends with a creep.