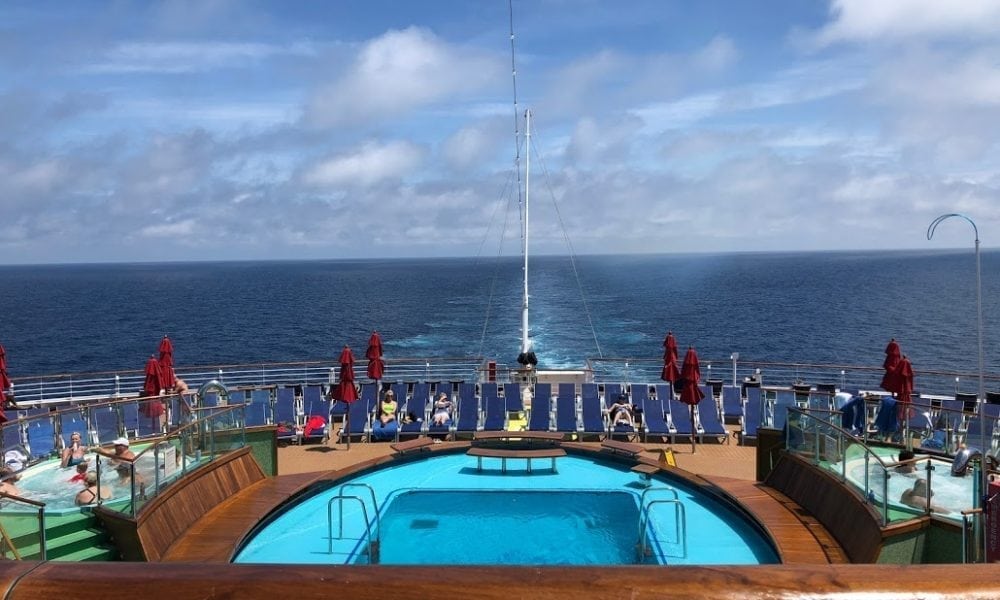 The red/white tube slide was very nice and fast. The blue slide was more traditional, and as usual, my son got stuck on it. So it was one and done for that one. I don’t see what it would hurt to steepen those things a little. The tube slides are wonderful, but the others are often more trouble than they are worth.

Celestial Strings is “can’t miss.” As far as production shows go, I’d venture to say it’s been my favorite ever at sea. I don’t even know how to explain it. Just go. Marcus Monroe was my other favorite show at the theatre. He is a juggler/comic who was very enjoyable. Those are the only shows I recommend in the theatre.

A highlight of the cruise for me were the atrium entertainers. I hope I’m not missing one but it appeared that 4 performers rotated throughout the week, the strings trio from Celestial Strings, Emma Jude, Jeffrey Munks, and a brass trio. Among those, Jeffrey Munks was my favorite. We watched this brilliant pianist a little nearly every day. I was happy to discover that his music is also on iTunes.

The other bands throughout the ship were very country-heavy and thus not for me. The band in the Havana Bar played Cuban music nightly and appeared to be a hit. The bar was most always crowded and dancers plentiful.

The IMAX is a nice idea. I wish there was more variety in the films though. The Panda film we watched was excellent. Thrill Theatre type-shows tend to bring on motion sickness for me. We did the first level which was okay, but nothing I want to invest my valuable cruise time in doing.

Dive-In movies are great. We watched one that week. Depending on what’s playing, a movie on a deck chair may have been far more entertaining than much of what is in the theatre.

The Punchliner comedy shows could be so great if Carnival would bother to do it right, but for some reason they won’t. It’s among the most popular entertainment options, but it’s held in the smaller lounge. If you want a seat, arrive at least 30 min early. Standing room only every single show, all week.

Two comedians the first half of the week and two the second half. Each does 2 PG sets which usually contain at least a little repeated material. I mention the PG sets because we can’t go to the 18+ shows. Most places, such as movie theatres, acknowledge that if parents want their teen to see an R-rated show, that’s their decision. Carnival doesn’t play that way and instead imposes the no exceptions 18+ only rule.

As a civil engineer, I know pretty much anything is possible if you are willing to spend the money. I suspect the posts aren’t a necessity as much as a money saver.