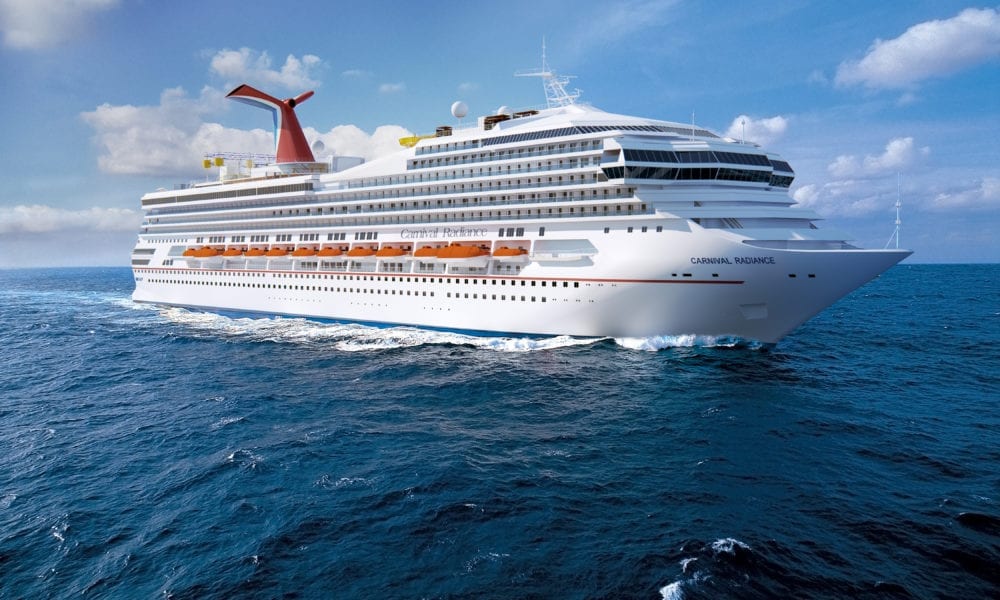 Fans of Carnival Victory may want to make sure they book one last sailing on the ship, because in 2020, she will be undergoing a bow-to-stern refurbishment from which she’ll emerge as Carnival Radiance.

As part of Carnival Cruise Line’s $2 billion fleet-enhancement program, the Victory will head to Cadiz, Spain on March 19, 2020 to undergo a 38-day refurbishment. And when she sets sail again on April 26, she will do so under the name Carnival Radiance.

If this sounds familiar, that’s because it was only a few short months ago we reported Carnival Triumph will undergo the same process on almost the exact same timetable in 2019. Once both ships have been refurbed and given new names, they — along with Carnival Sunshine — will comprise the fleet’s Sunshine class.

Longtime Carnival fans will remember that the Carnival Sunshine originally joined the fleet as Carnival Destiny before undergoing a massive drydock back in 2013.

What Will Be Added During the Dry Dock?

Christine Duffy, president of Carnival Cruise Line, says that Victory’s transformation “will offer unprecedented opportunities for our guests to Choose Fun and enjoy the widest variety of culinary, beverage and entertainment options at sea.”

That includes the addition of one of Carnival’s most popular venues, the RedFrog Pub, and is in addition to the venues which were added earlier this year, including Guy’s Burger Joint, the BlueIguana Cantina and the Alchemy Bar.

Guy’s Pig & Anchor Smokehouse will be added to Carnival Radiance.

Radiance will also be home to Fahrenheit 555 Steakhouse. Meat lovers will also be happy to hear that Guy’s Pig & Anchor Bar-B-Que Smokehouse — a complimentary, outdoor venue — will be serving up some of celebrity chef Guy Fieri’s much-loved grub.

While Carnival Victory already has a Bonsai Sushi Express on board, the Radiance will add that restaurant’s full-service, Bonsai Sushi.

The ship will also serve up homestyle Italian cooking at Cucina del Capitano. And if you’re looking for a truly unique dining experience, make a reservation for the Chef’s Table, which will relocate to a cool, glass-enclosed section of the forward dining room.

A dinner setting at Bonsai Sushi.

In other food-related news, the Pizza Pirate is being replaced by the Pizzeria del Capitano, which will still offer fresh-made pies 24 hours a day. Swirls — the place to hit for all the ice cream and frozen yogurt you can eat — will expand, as will everyone’s favorite sweet spot, Cherry On Top, and the JavaBlue Cafe, home to your caffeine needs.

In addition to the previously mentioned RedFrog Pub, Radiance will also see Piano Bar 88 added to her roster of nighttime hotspots, as well as a multi-purpose version of the Liquid Lounge, which will host events such as Hasbro, The Game Show during the day, and various Playlist Productions at night. The Limelight Lounge, meanwhile, will also serve multiple purposes. It’s there that you can laugh it up with the comedians featured on the Punchliner Comedy Club stage before dancing the night away.

The Limelight Lounge with host the Punchliner Comedy Club.

Feeling adventurous? Head for the SportsSquare and challenge yourself on the ropes course… which just happens to be 150 feet in the air.

This is also where you’ll find everything from a basketball court to miniature golf. If you’d rather get wet and wild, head over to Waterworks to enjoy the various slides and, of course, the 75-gallon PowerDrencher which will make sure you’re soaked from head to toe.

On the other hand, if you want something a bit quieter, head for the expanded, adults-only Serenity deck or the Cloud 9 Spa.

Carnival Radiance will also receive a ropes course that takes you 150′ above the sea.

Itineraries won’t be released until November 2018. For now, you can receive a “first-to-know” alert by registering here.