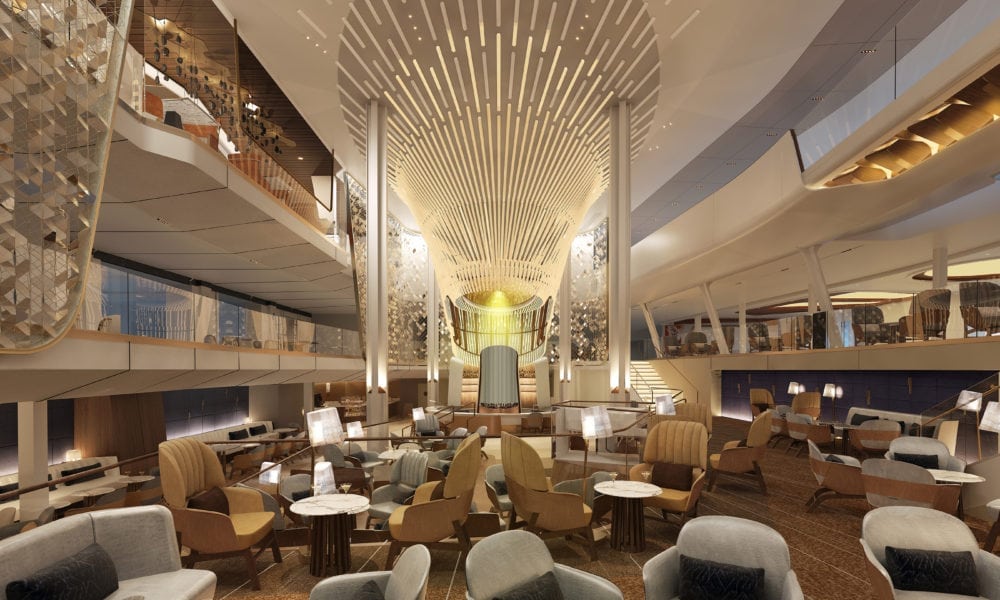 There are less than three months before Celebrity Edge embarks on her first official sailing. Right now, Celebrity Cruises is busy completing the final touches on the ship, and they’ve just revealed what details on the centerpiece of the ship – The Grand Plaza.

For the design of the atrium, Celebrity sought renowned designers, including Paris-based Patrick Jouin and Sanjit Manku from Jouin Manku Studio. They are credited with world-famous works such as the Alain Ducasse au Plaza Athénée and the Jules Verne restaurant in the Eiffel Tower. Jouin’s connection to the Chantiers d’ L’Antlantique shipyard is rooted beyond his work on Edge. “The shipyard is very important for me and my family: My grandfather worked at this very yard, and when he passed away at a young age, they hired my grandmother so she could continue to support her family. This project was a very emotional one for me. Sanjit and I channeled that into our design, which inspired our unique approach in showing the craftsmanship.”

The Grand Plaza takes inspiration from the glamorous days of transatlantic travel. At a time when cruise ships were at the heart of chic society, the center of the vessels were usually gorgeous ballrooms with dramatic staircases and ornate chandeliers. The Grand Plaza pays homage to those historic spaces and reinterprets them for the 21st century.

Spanning three decks, the space transforms both physically and atmospherically throughout the day. The Chandelier is both a lighting fixture and art installation that rises over the Martini Bar to the ceiling three decks above. Weighing in at seven tons, it is composed of 765 blades illuminated by LED strips that change color from day to night.

The 5,167 square foot atrium space was inspired by the piazzas of Italy, and is home to many new specialty restaurants. These include Raw on 5, Fine Cut Steakhouse, Le Grand Bistro, Café al Bacio, and the new Grand Plaza Café. The always-buzzing Martini Bar can be found at the center, and along the edges of The Grand Plaza are hand-stitched mesh screens, combining over 13,500 pieces of metal, leather, and fabric.

In the morning, stop by for a cappuccino or croissant at either of the cafés, enjoy afternoon tea or a pre-dinner cocktail during midday, and listen to live music and socialize at nightfall.

The Grand Plaza is the highlight of Jouin Manku’s involvement in the design of their ship, but their influence can be felt throughout the vessel.

Inspired by the thousands of hands that go into the construction of a ship, Jouin Manku designed the exposed corridor, complete with authentic welders’ touches, architects’ markings, and engineers’ notes. The space transforms depending on the direction a guest is walking, like a life-sized lenticular wall. One way, travelers can see the beauty of the ship’s steel bones. The other way, notice a sleek, modern design that contrasts the alternate view.

Their influence is also apparent in the Main Dining Atrium, where they’ve turned the staircase into a work of art. Hanging three stories between the flights of stairs is an installation known as The Pendulum. Its base moves gently to the rhythms of the ocean, to remind guests that they are moving and connected to the sea – even when they cannot see it.

To learn more about the ship and spaces touched by Jouin Manku, click here.