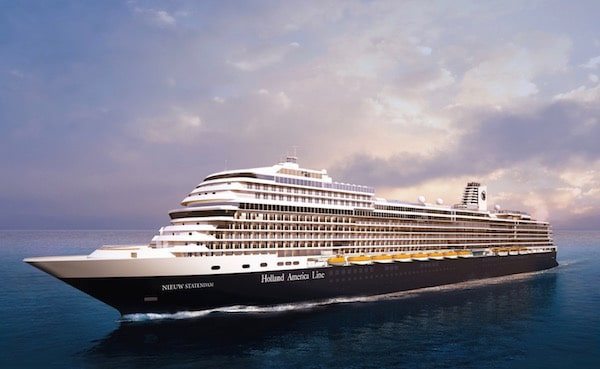 When Holland America’s Nieuw Statendam is welcomed to the fleet this December, the vessel will showcase the evolution of the design of the first Pinnacle class ship, Koningsdam.

Nieuw Statendam‘s musical design and “artfully inspired” finishing blend Holland America’s past, present, and future and is showcased in a trio of videos on hollandamerica.com.

The 2,666-guest ship will blend contemporary style with what Holland America is known for – classic elegance. The head of design and interiors is once again acclaimed hospitality designer Adam D. Tihany and Bjørn Storbraaten, one of the world’s leading architects in the cruise industry.

Tihany has approached Nieuw Statendam with an eye towards public spaces that reflect the tradition and elegance Holland America is known for, while introducing new features at the same time. Light-filled spaces focus on curves and graceful lines, and the key to the concept is visual interaction where guests engage with spaces rather than just moving through them without a second thought.

The ship will have a three-deck-high atrium featuring a stainless-steel sculpture that’s meant to make guests feel like they’re surrounded by a musical instrument. The atrium is then capped by a skylight that serves as a backdrop for subtly changing projections. There will be clouds in a blue sky or images of light in the water by day, and dramatic lighting or starry constellations by night.

The main Dining Room on Nieuw Statendam will span two decks and be framed by views of the sea. The interior will be bright with a modern, global design and curved architectural pillars will accentuate the soaring ceiling. Custom furnishings and modern lighting is being fabricated especially for the ship. The centerpiece is a curved copper sheath surrounding a two-story wine tower holding an impressive selection.

Rudi’s Sel De Mer, the line’s French brasserie, has been reimagined for this ship and will seat 54 guests. The restaurant will retain its original curving shape and walnut wood columns, and richly colored décor will accentuate the space. The back wall will be adorned with a collection of porcelain plates decorated with Chef Rudi Sodamin’s Food Faces culinary pop art, produced by the French brand Bernardaud.

Architect and designer Bjørn Storbraaten previously worked on Koningsdam, Nieuw Amsterdam, and Eurodam and adds continuity of the brand, but is also  taking the design to the next level. His hand is clearly present in the design of the central pool area, in particular.

The Magrodome area is two levels to create a large glass-enclosed space. The lower level includes traditional poolside elements including loungers, and the mezzanine level will have more seating, a giant screen for poolside movies, and the New York Deli and Pizza.

Nieuw Statendam will spend its first season exploring the Caribbean, roundtrip from Fort Lauderdale through April 2019. All Caribbean cruises will include a day at the private island Half Moon Cay. Next spring, the vessel will cross the Atlantic and spend the summer and fall in northern Europe and the Mediterranean. Then, Nieuw Statendam will return to the Caribbean in October 2019.