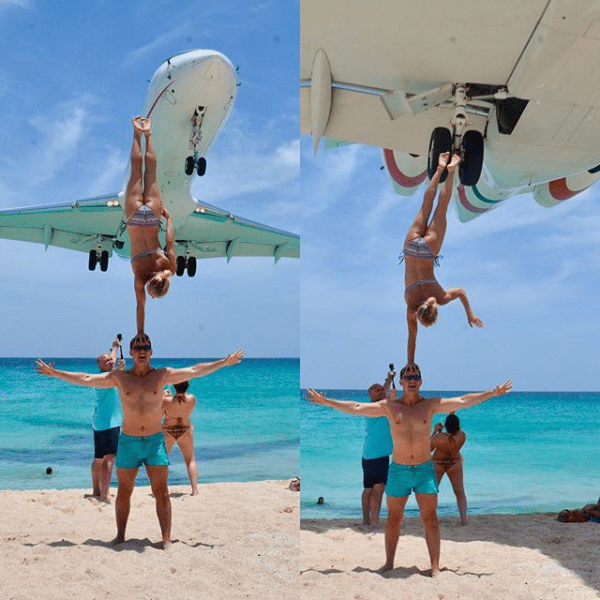 What started out as a silly, cruise-ending photo op for two visitors to Maho Beach in St. Maarten has resulted in the pair being taken to task by people who found their actions both ill-advised and possibly even dangerous.

The Picture in St. Maarten That Started It All

To mark the end of their cruise, acrobats Oleg Kolisnichenko and Yuliia Nos struck a pose on the stretch of Maho Beach famous because the planes fly so low overhead. Self-proclaimed daredevil Nos admitted that she and her fellow adventurer “absolutely love acrobatics and we like to have fun with it outside of work.” And so it was that while on the island of St. Maarten., they came up with the idea for him to hoist her in the air just as a low-flying plane came in for a landing, creating the illusion that her feet were practically touching the wheels of the descending jet.

“The beach really is dangerous, yet exciting at the same time,” Nos was quoted as saying in news reports. “A lot of people were taking pictures with a plane above their heads, but we had some idea to make something cool.”

Although it took them a few tries, Nos said, “We managed to perform it as the plane arrived, but we didn’t expect it to be so big and so close to us… it didn’t touch my feet, but I felt so much air from the plane, and I lost my balance. It was so much fun and exciting, but it was only after I realized how dangerous it was.”

Needless to say, folks on the web were quick to let the pair know exactly how foolish their actions were… or at least were perceived to be. Once the picture was posted to Instagram, people began reacting. “This is the reason that we can’t have nice places for spotting,” said one commenter. “People don’t know how to deal with freedom and start to do [stupid] things.” Said another, “This beach is at risk of being shut down because of brainless antics like this.”

Others, however, saw the photo as more playful than harmful. “Someone, before spitting out hatred, should learn how perspective works,” wrote one, while others pointed out that the plane was clearly farther away from Nos than it appeared in the photograph.

The reaction of those who saw the pair’s actions as dangerous is understandable, however. It was only last summer that a woman died after being blown off her feet by the force of a jet’s engines as it landed at the airport next to the exact same beach.

“Many tourists,” read a statement from local police at the time of the woman’s death, “come to the island to experience the thrills of the landing of approaching aircrafts flying low above their heads and holding on to the airport fence and standing in the jet blast of large aircraft taking off. Doing this is however, extremely dangerous.”

The start of the airport’s runway is only about 160 feet from the fence which separates the facility from the beach.