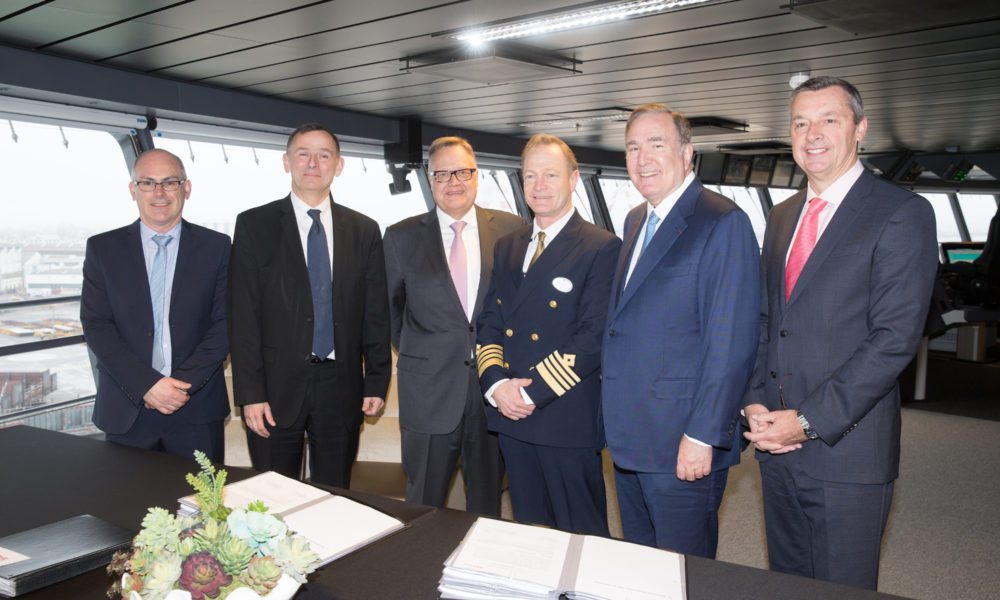 Royal Caribbean takes delivery of Symphony of the Seas

Royal Caribbean International has officially taken delivery of their newest mega ship, Symphony of the Seas. The line honored the instrumental project team during the delivery event at STX France shipyard today.

The 25th ship in Royal’s fleet, Symphony of the Seas is 228,081 gross tons and 1,188 feet long. She will hold 5,518 guests at double occupancy in 2,759 cabins, including 28 additional balcony rooms overlooking the ocean or Boardwalk neighborhood. The Oasis-class ship follows the trail of her sisters, with seven distinct neighborhoods and the tallest slide at sea.

Hooked Seafood – This upscale eatery at the top of the world’s largest cruise ship in the Solarium service up New England-inspired seafood and unparalleled ocean views. The menu offers classic coastal favorites like lobster rolls, crab claws, a signature fish sandwich, and a raw bar.

Playmakers Sports Bar & Arcade – Stretching the length of a reimagined Boardwalk, the whole family can watch the home team play across 31 big-screen TVs both day and night. The arcade is packed with over 20 games, and the menu of classic American bar food features wings, burgers, popcorn shrimp, sundaes, craft beers, cocktails, and more.

El Loco Fresh – Made-to-order tacos and burritos wrapped with fresh tortillas are among the Mexican street food favorites that can be found at El Loco Fresh, made for guests that want to grab it and go.

Sugar Beach – The signature candy and ice cream shop is the sweet spot on the Boardwalk, with over 100 types of candies, a variety of ice cream flavors, and even DIY activities for aspiring culinary artists.

Royal Caribbean’s first glow-in-the-dark laser tag game – Battle for Planet Z – brings two teams of eight head-to-head in an intergalactic adventure to determine who will claim the last planet in the galaxy. Escape the Rubicon is a custom-built escape room designed to feel like a submarine. Guests must team up and race against the clock to solve a collection of puzzles before time runs out.

Rendering of the Ultimate Family Suite

The Ultimate Family Suite is a two-level, 1,346-square foot suite on the ship filled with awesome thrills for the whole family – without ever having to leave their room. Features include an in-room slide, a private cinema with 85-inch HDTV, a floor-to-ceiling LEGO wall, a 212-square-foot balcony complete with a ping-pong table, and a full-size whirlpool. The ship’s most exciting suite also includes the services of a Royal Genie, who will be available to cater to the guests’ every whim.

Symphony of the Seas will welcome her first guests on March 31 for a one-time-only, 5-night preview sailing that calls in Naples and Rome, Italy.

The vessel’s maiden 7-night Mediterranean voyage will depart Saturday, April 7 from Barcelona, Spain, where the ship will come to life thanks to the 2,200 international crew members who represent 77 countries around the world. Symphony will homeport in Barcelona for the summer, visiting Palma de Mallorca, Spain; Provence, France; and Florence/Pisa, Rome, and Naples, Italy. Beginning November 10, the ship will begin sailing from her year-round homeport of Miami, Florida to the eastern and western Caribbean.

For more details on Symphony of the Seas, click here.