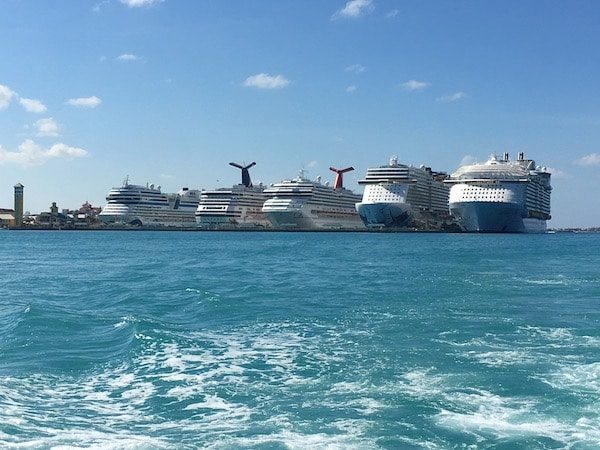 Despite a flurry of recent reports, the fact is that every year, hundreds of cruise ship inspections occur, with very few ships ever failing to pass. We recently spoke with Aimee Trefiletti, chief of the Center For Disease Control’s Vessel Sanitation Program (VSP), about what exactly goes into these cruise ship inspections.

What A Cruise Ship Inspection Involves

Looking back at five ships docked in Nassau.

Cruise ships are graded on a scale of 1 to 100, and any score below 86 is considered failing. These inspections are unannounced, meaning the ship must be prepared for inspection on any given day.

According to Trefiletti, the inspections can last 8 to 10 hours, depending on the size of the ship and number of inspectors involved. Noting that cruise ships are like “floating cities,” Trefiletti addressed how the VSP inspection for cruise ships involves a similar process to what multiple different land-based industries undergo.

“There are several areas that we look at in addition to food safety,” Trefiletti explained. “We also look at the medical facilities, particularly related to gastrointestinal illness surveillance and documentation… We look at potable water from source to storage, as well as disinfection and distribution and those processes, and we look at the recreational activities onboard, particularly swimming pools, whirlpools, water parks — all those kind of facilities — for filtration, disinfection, general maintenance and safety.”

Read More: The Truth and Lies About Noro Virus

But that’s only the start. “We also look at the child activity centers,” she continued, “particularly diaper changing stations, illness and infection control for children, hand washing stations, their toilet rooms. We look at the hotel accommodations, particularly routine cleaning sequences as well as infection control procedures if they were to have an outbreak of gastrointestinal illness. We also look at ventilation systems [as far as] maintenance and cleaning. And then, finally, we look at several common areas of the ship, particularly for pest management strategy, so they don’t have any infestation of pests, and general cleanliness and maintenance in these areas.”

Trefiletti then went into further detail, explaining that inspections involve checking the temperatures of food storage areas, the temperature of individual food products, employee habits for hand washing, cleanliness, hygiene, whether anybody is ill, and if those with beards are wearing a beard restraint. Cleaning and sanitizing facilities, like the warewash machines and the temperatures that they’re [operating at] are also assessed. Poolside, inspectors check pH as well as halogen-based disinfectant levels – usually either chlorine or bromine.

What Happens When A Ship Fails

Ships that fail an inspection must submit a corrective action statement. There is then another inspection which, like the original, is unannounced. That said, however, it’s relatively uncommon for a ship to actually fail the inspection.

All inspection reports and scores, as well as the corrective action statements that cruise lines submit afterwards, are available on the VSP website at cdc.gov. This means that cruise passengers who want to see how well a ship they’re considering booking did during it’s most recent inspection, they can easily search the database. It’s a level of transparency not at all common in the travel and hospitality industries… or most others, either.

How To Keep From Getting Sick On Your Cruise

Thanks to news reports about record flu outbreaks on land, many passengers are wondering how they can best avoid getting sick while they’re on vacation. “The most important thing is to wash your hands,” Trefiletti says, explaining that taking this simple step — and doing it often — is the No. 1 way to avoid illness.

Trefiletti also notes that “if you see someone getting sick with vomiting or diarrhea, you should leave the area as soon as possible, and then report to cruise staff if they have not been notified already.”

Last but not least, remember to drink plenty of water. Between the tasty drink specials and the endless Caribbean sun, it’s easy to get dehydrated quickly. Keep yourself hydrated to keep your immune system in its best shape for fighting off illness.

Author: adayincozumel
Filed Under: News
Why One Cruise Line Is Downsizing Its Ships
Holland America’s Culinary Council Dives Into Enhancing Onboard Restaurants